Our residency programs have gone virtual! State Theatre New Jersey’s artist residencies let people get “up close and personal” with professional performing artists. Each year, students and adults participate in a variety of activities, from workshops and masterclasses to performances, informances, and more. All programs are offered free of charge.

Interested in participating or learning more about our virtual residency events? Email education@stnj.org.

Most of State Theatre New Jersey’s residency programs are targeted to specific audiences and open by invitation only, though some events are open to the public. 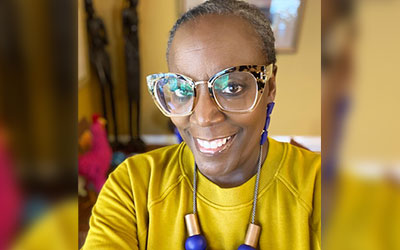 Since 2009, State Theatre New Jersey Poet-in-Residence Glenis Redmond has brought poetry into the lives of people all over the Garden State—among them students, senior citizens, and members of the general public. Her experiences and the people she has met have inspired a number of her poems, including “Bruised,” featured in her TEDxGreenville talk and “Dancers,” dedicated to Norma Heflin, a kindred spirit Redmond first met at Quail Brook Senior Center in Somerset.

An award-winning poet and educator from South Carolina, Redmond is passionate about guiding others to gather their stories through poetry. She tells stories with poetry—tales from her life, her family, her African-American heritage, and her sensitive observations of the world around her—inspiring audiences of all ages. Redmond is a teaching artist with the Kennedy Center in Washington, DC; Poet-in-Residence at the Peace Center in Greenville, SC; and a featured performer on National Public Radio and TEDx.

In the "Raise Your Voice" free poetry workshops on February 3 and 4, focusing on social justice, attendees can learn some of the techniques she uses for writing her well-crafted and deeply personal poems. Through her workshops, she encourages participants to draw upon their own lives and experiences to tell their own stories. In April during National Poetry Month, Redmond returns with a FREE online Community Poetry Reading on Zoom on April 14. This special event is a celebration of our community, and the power of poetry to connect us all. The event will start with Redmond as she performs poetry from her 20+ year career. Later in the program, she will be joined by some of the people that she has guided and inspired to create their own personal poems. 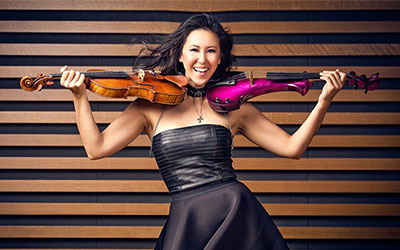 A violinist with the Metropolitan Opera Orchestra, Yoon Kwon Costello leads an extraordinarily versatile career. With her debut with the New Jersey Symphony Orchestra, Yoon began her professional career at age 13, and made her NYC debut at age 17 at Avery Fisher Hall. Since then, she has performed extensively with major orchestras on five continents, such as the Cologne and Warsaw Philharmonics, and the California, Cincinnati, Colorado, Houston, Honolulu, New Mexico, and Vancouver Symphonies.

An avid chamber musician, her festival appearances include Marlboro, Verbier, Tanglewood, Kuhmo, Rome, Aspen, La Jolla, Spoleto, and the Santa Fe Chamber Music Festival. As a recitalist, she has performed in over 100 cities, and toured extensively with her sister, pianist Min Kwon. She made her Carnegie Hall recital debut in 2008. Yoon holds her BM, MM, and the prestigious Artist Diploma from The Juilliard School.

In her featured educational/performance videos, Yoon gets up close and personal in each of her three featured topics including Violin Solos in Opera (La Boheme, La Traviata, Madame Butterfly), the Evolution of the Concerto (Bach, Mozart, Tchaikovsky, Stravinsky, and Berg), and a feature on Scott Joplin (African American composer and pianist, King of Ragtime music).

State Theatre New Jersey’s 2020-21 artist residency is in partnership with THE CENTER FOR MUSICAL EXCELLENCE, a non-profit organization that nurtures and supports gifted young musicians who wish to pursue their advanced education and life in music in the United States. The residency program gives CME’s Young Artists valuable experience in performing and teaching in a wide variety of settings.