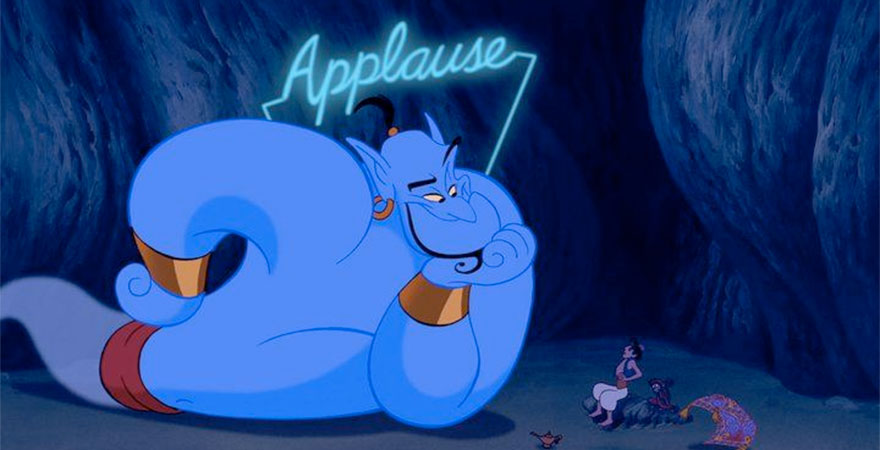 Climb aboard a magic carpet ride with Aladdin, the genie, and Princess Jasmine at State Theatre New Jersey on Tuesday, August 16, 2016 at 10:30am or 7pm as part of the Free Summer Movie Series!

Aladdin is the 31st animated feature in the Walt Disney Animated Classics Series, and is based on the folktale “Aladdin and the Magic Lamp” from the Middle Eastern collection of tales One Thousand and One Nights. The most successful film of 1992, it features music by Alan Menken and lyrics by Howard Ashman and Tim Rice, whose music also appears in other Disney films, such as Beauty and the Beast and The Little Mermaid.

Ashman and Menken first came up with the idea for a musical version of “Aladdin and the Magic Lamp,” and wrote several potential songs before pitching the idea to Disney. Directors John Musker and Ron Clements liked the new songs, and added their own screenplay to the project. Caricaturist Al Hirschfeld–best known for his portraits of Broadway and film stars–provided the inspiration for most of the animation in the film. Although the movie takes place in the fictional city of Agrabah, the inspiration for the scenery came from Iran and other places in the Middle East.

The movie, which is the third highest-grossing traditionally animated feature in the world, tells the tale of a street urchin, Aladdin, who has his wishes granted when he frees a genie from a magic lamp. Aladdin soon discovers that the evil Jafar has other plans for the lamp—and for the beautiful Princess Jasmine! Aladdin must save the princess and defeat the greedy Jafar with help from his new friend, the genie.

The character of Aladdin, voiced by Scott Weinger and Brad Kane, was originally written as a 13-year-old boy visually inspired by actor Michael J. Fox. However, the character’s roughness (based on a young Harrison Ford) contradicted his youthful appearance, so his age was changed to 18 and he was redesigned to resemble Tom Cruise as well as Fox. Several of the other characters in Aladdin were also based on real people or other characters: the animators for Jafar and Iago incorporated elements of their respective voice actors (Jonathan Freeman and Gilbert Gottfried) into the characters, and the character of the sultan was based on the Wizard of Oz.

Each character in Aladdin had an individual animator, and the animators collaborated—despite working in different parts of the country—on scenes with two or more characters. Jafar was the only character who was not based on Hirschfeld’s work (in order to provide a contrast with the other characters), and he had multiple animators to work on his beggar and snake forms.

Many of the characters in Aladdin were double-cast, so the speaking and singing voices were voiced by different actors. Arguably the largest star in the movie is Robin Williams, who voiced the genie. Williams was brought on to do the part when the two directors and Eric Goldberg, the supervising animator for the genie, created a reel of Williams’ stand-up comedy with animation of the genie. Throughout the film, Williams improvised entire scenes (such as the opening scene with the peddler), and included celebrity impressions of Jack Nicholson, Groucho Marx, and Arnold Schwarzenegger. Williams’ participation in Aladdin changed the voiceover industry from a business only for trained voice actors to a type of role any actor could play.

Aladdin earned a number of awards and nominations: it received Academy® Awards and Golden Globes for Best Original Score and Best Original Song (for “A Whole New World”), as well as four Grammy® Awards for Best Soundtrack Album, Song of the Year, Best Pop Performance by a Duo or Group, and Best Song Written for a Motion Picture (for “A Whole New World”). Robin Williams and Scott Weinger also received recognition for their roles. The movie continues to be a family favorite, and the music can be heard in homes, in movie theaters, and even on Broadway! Join us at The State on Tuesday, August 16, 2016 at either 10:30am or 7pm (or both!) to see Aladdin, a wonderful tale of friendship, family, and magic!