Q&A with our Director of Production Joe Stoltman 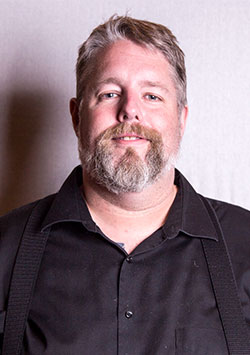 Two years ago, State Theatre New Jersey's Director of Production Joe Stoltman joined the staff and it has been a crazy ride ever since. From Ringo Starr, Alice Cooper, and Diana Ross to large scale Broadway shows and beyond, Joe has seen it all. But like most people here at The State, Joe has had a very interesting career prior to working here . We recently sat down with this man of mystery or rather, the man behind the curtain to chat about his career and what led him to the State Theatre.

How did you get your start in the arts? What led you to the where you are today as the Director of Production for the State Theatre?
I started in theater as an actor/director in high school. I continued in college, though I was majoring in Psychology. By the end of college, though, theater was really the only thing I was interested in, and I had done technical theater for work-study, and so it was a natural transition for me to the professional world of technical theater. After many years in scenery and automation in regional theater, I had met all the challenges in a single department, and so I desired to oversee all departments in the theater, and I went to grad school to gain the managerial and remaining technical skills I was missing. After three years at Yale, I emerged with a Master of Fine Arts in Production Management and the knowledge of how to use it.

What do you do as a Director of Production? And what is a typical show day like for you?
Like most managers, I wear many hats and do many things. Primarily, I oversee the stage crew for the theater, which consist of Electrics, Video, Staging, Audio, Props, Wardrobe, and Rigging. My job is really about making certain each of my departments has the resources they need to get the job ahead of them done. The biggest resource is information, and I advance all shows with the incoming groups, primarily to communicate the ways of our venue, as well as gather the needs of the artists and talent. I then disseminate that to the department heads and help coordinate their effort to make the venue ready for the upcoming event. If I have done my job well, the day of the event is a calm one for me and the crew. I am always on site from the beginning of the day, which usually starts around 8:00am (though sometimes much earlier), through the end of the night around 11:00pm (though sometimes later), and I answer questions, help the crew overcome challenges and coordinate the efforts of both the crew and the incoming artists. I also communicate with the Front of House staff (the ushers and bar servers) about the start of the show and other aspects of the day.

What are some of the places that you have worked at throughout your career?
I have worked many places over my career. Most of my career has been producing theater organizations, such as the Shakespeare Theatre in Washington DC, the American Repertory Theatre in Cambridge, MA, the Chautauqua Theatre Company in Chautauqua, NY, and the Yale Repertory Theatre in New Haven, CT. I have also done technical work for the Blue Man Group in Boston, as well as freelance work in Washington DC, Boston, and New York City.

What are some of your favorite artist encounters here or at other venues and why?
All encounters with artistic luminaries have a special feeling to them, though at the same time there is an absurd, everyday quality. What I cherish most is that mundane quality, where I am reminded that though many of these people have occupied the upper reaches of their craft or world, they are people just like each of us. I once ran a show that starred Patrick Stewart of Star Trek fame, and seeing him everyday as a matter of course was a wonderful experience, as well as getting to witness genius of his artistic process. Recently I got to see Alice Cooper treat one of his challenged and special fans with the greatest of care and respect, spending time with him alone, and treating him like there was no one else to see and nowhere else to go. I feel very lucky to get to spend my life and career supporting such people.

What would you say is the most challenging thing about your job?
The largest challenge is two-fold; getting complete and accurate information for all departments in the face of literally of thousands of pieces of information, and then balancing the competing needs of the artists, the crew, the audience, and the State Theatre itself. When we have up to 20 shows coming up and I am trying to juggle the details of each show, all while trying to do the right thing for each constituency, I often feel like I am juggling fire balls while walking on a tightrope over the Grand Canyon. However, at the end of each successful show, there is an unequalled feeling of satisfaction.

What kind of shows do you like personally and what State Theatre shows are you looking forward to the most this year?
I tend to stick to my roots in my preferences; I enjoy straight plays and Shakespeare foremost, though an occasional musical grabs my attention. I also enjoy comedy and the “classic” rock, which I think of as “rock.” I am looking forward to Penn & Teller in October, as I have been a fan of theirs for a long time. I am also looking forward to The Monkees for the same reason, as I have fond memories growing up of running home to watch their TV show.