The Making of Dirty Dancing–The Classic Story on Stage 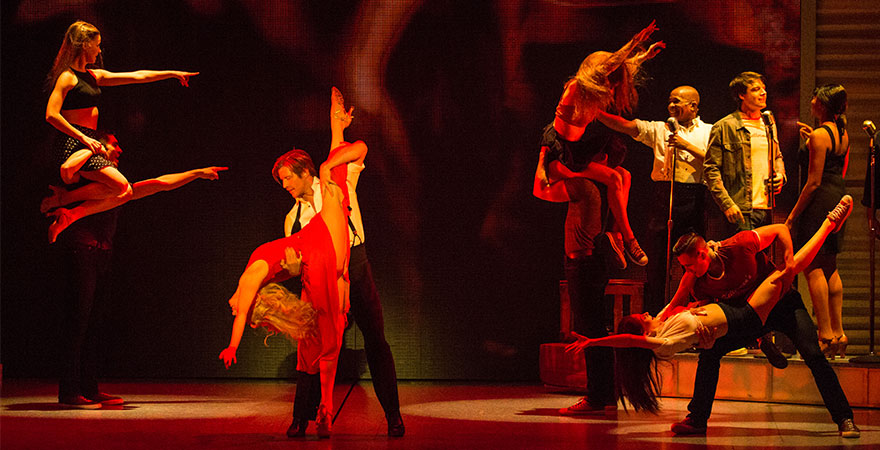 Dirty Dancing–The Classic Story on Stage is an exciting musical experience which showcases live music, passionate romance, and sensational dancing. Seen by millions across the globe, this worldwide smash hit features the hit songs “Hungry Eyes,” “Hey Baby,” “Do You Love Me?,” and the heart-stopping “(I’ve Had) The Time Of My Life.” London’s Sunday Express says, “This crowd-pleasing stage adaptation hits the jackpot!” Come see the riveting Broadway musical, Dirty Dancing–The Classic Story on Stage for five shows at The State on November 4-6, 2016!

The film Dirty Dancing was made on a shoestring budget of $5 million and has gone on to gross over $215 million worldwide since its original release in August 1987. It made overnight stars of its two leading players, Patrick Swayze and Jennifer Grey, and was the first film to sell over 1 million copies on VHS. The film is also widely credited with reinventing the popular dance scene by introducing a new style of erotically charged partner dancing to the world.

Dirty Dancing’s iconic soundtrack spawned two multi-platinum albums that have sold over 44 million copies combined. Interestingly enough, author Eleanor Bergstein wrote the script after choosing the music that would be featured. The soundtrack is noteworthy for its mixture of period tunes from the 1960s (“Love Is Strange” by Mickey & Sylvia, “Do You Love Me?” by The Contours) and contemporary new additions (“Hungry Eyes” by Eric Carmen). The film’s signature tune, “(I’ve Had) The Time of My Life,” was awarded a Grammy® for Best Duet, a Golden Globe for Best Original Song, and an Academy Award® for Best Original Song.

Dirty Dancing–The Classic Story on Stage began as an eight-week staged workshop in Manhattan during the fall of 2001. It was first performed at the Theater Royal in Sydney, Australia in November 2004 before embarking upon a hugely successful tour of Australia and New Zealand. In total, it played 18 sell-out months “down under.” A new production opened at the Theater Neue Flora in Hamburg, Germany in March 2006 where it broke house records for achieving the highest paid advance in European theatrical history.

The production began performances on London’s West End in October 2006 with an £11 million advance (that’s over $14 million!) and went on to become the longest-running show in the history of the Aldwych Theatre. It ran for five years and closed in July 2011. A two-year UK National Tour followed that production and then returned to London for a limited run at the Piccadilly Theatre from July 2013 to February 2014.

Dirty Dancing–The Classic Story on Stage has gone on to perform across the world in markets as diverse as Holland, South Africa, and Sweden. Most recently, it was represented by a new UK tour (launched in March 2014), a German tour (launched in April 2014), and a French tour (launched in January 2015). The show returned to Australia with a new tour that premiered in late 2014 in honor of the stage production’s 10th anniversary. Don’t miss your chance to see the record-breaking theatre sensation, Dirty Dancing–The Classic Story on Stage for five shows on November 4-6, 2016 at State Theatre New Jersey, you’ll have the time of your life!