Charlie Thomas' Drifters and more at the Golden Oldies Spectacular! 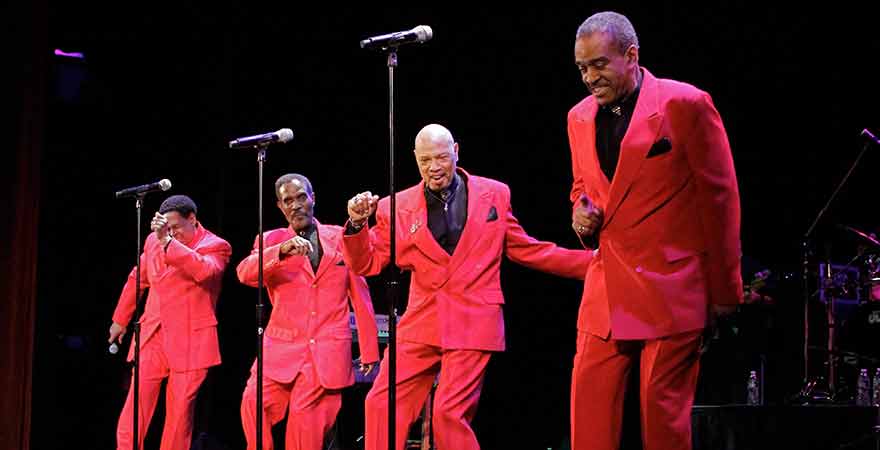 How does a musical group get started? Well Charlie Thomas' group, The Five Crowns, was performing at the Apollo in 1958 when George Treadwell, who owned the Drifters trademark, fired his singers and replaced them with Charlie and The Five Crowns. Come hear The Drifters perform at State Theatre New Jersey on November 12, 2016 as part of the Golden Oldies Spectacular! The concert will also feature The Coasters, Frankie Lymon’s Teenagers, Shirley Alston Reeves and her Shirelles, The Skyliners, Jay Siegel’s Tokens, The Passions featuring Jimmy Gallagher, and Larry Chance &  The Earls.

After being discovered by Treadwell, this group went on to become—you guessed it—The Drifters, and 50 years and countless hits later, they will be here with us at the State to perform some of their biggest hits, including “There Goes My Baby,” “Save the Last Dance for Me,” “This Magic Moment,” “Up on the Roof,” “On Broadway,” “Dance with Me,” “Under the Boardwalk,” and “Saturday Night at the Movies.” The Drifters’ combination of R&B, doo-wop, rock and roll, and soul-inspired beach music captured listeners at the time of their emergence in the music industry. Their musical style, as well as Thomas's tenor voice and charismatic stage performance continue to amaze audiences worldwide.

Along with The Drifters, The Coasters are yet another vocal group in the history of rhythm and blues to be featured in the Golden Oldies Spectacular that are held in reverence by fans and devotees of the genre.  The Coasters got their start Los Angeles in the late 1950s, singing songs written by Leiber and Stoller for Spark Records. When the songwriting duo moved to Atlantic Records in New York City, The Coasters came with them. Their earliest hits were “Riot in Cell Block #9” which went to #1 on the R&B charts as well as “Just Like Me,” “Young Blood,” and “Searchin.” The Coasters songs continue to reach new audiences as they are featured prominently in the score of the musical Smokey Joe's Cafe.

Another groundbreaking group to be featured  is Shirley Alston Reeves and her Shirelles. The group started out at Passaic High School when they wrote and performed “I Met Him on a Sunday” at a school talent show. The mother of a classmate owned Tiara Records, so they signed with Florence Greenberg who started them on their career. The Shirelles, who had seven Top 20 hits on the pop, R&B, and UK charts, are credited with being pioneers of the “American Girl Group genre,” and were the first Afro-American girl group to have a #1 hit. Some of The Shirelles’ biggest hits include “Will You Still Love me Tomorrow,” “Soldier Boy,” “Mama Said,” “Baby It's You,” and “Dedicated to the One I Love.” Rolling Stone named The Shirelles as one of the top 100 best acts in rock and roll history and listed two of their songs among the greatest of all time.

The Teenagers were the first integrated group, made up of Black, Hispanic and White members, to have a #1 hit in 1956. This hit, “Why do Fools Fall in Love.” Was released when they were only teenagers. With 13 year old Frankie Lymon singing lead, they hit helped define the doo-wop style, and Lyman's voice and popularity inspired Michael Jackson and Stevie Wonder to become teenage pop stars in their own right. The Teenagers had six top ten R&B singles, including “I'm not a Juvenile Delinquent” and “The ABCs of Love.”

Embrace nostalgia and come to State Theatre New Jersey on November 12 to hear these legendary artists, along with The Skyliners, Jay Siegel’s Tokens, The Passions featuring Jimmy Gallagher,  and Larry Chance & The Earls at the Golden Oldies Spectacular!