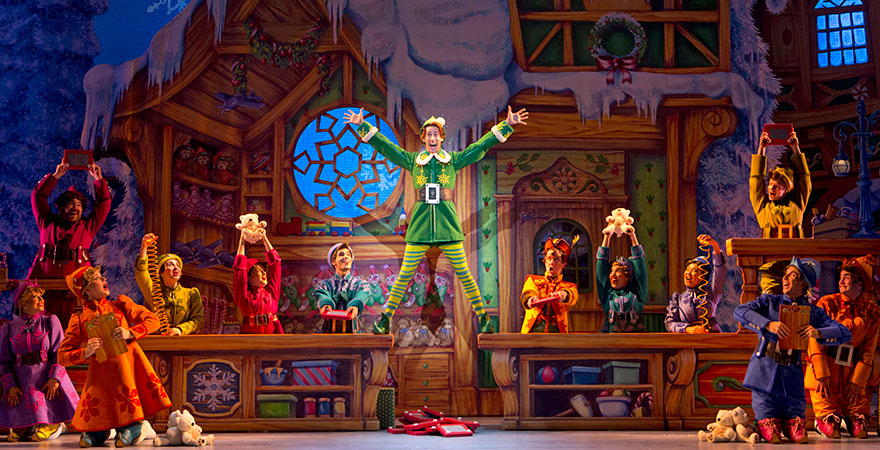 The spirit of Christmas was present at the State Theatre New Jersey  when the cast of Elf the Musical performed December 2nd.   Santa Claus, elves, gifts, candy, snow—everything that makes the holiday season magical, was part of this inspiring story about a human Elf.

Santa Claus (Mark Fishback) narrates the story which begins in the North Pole in a village called Christmastown.     His workshop is filled with elves in colorful costumes as they sing the tune “Happy All the Time.”   Buddy (Spenser Micetich) overhears Tequila the Elf mention something about a human at which point he questions if he himself is one.  Santa tells Buddy he was living in an orphanage and one day ended up in his knapsack, and ever since he has lived on the North Pole.  And Santa tells him he is definitely a human being.    Buddy is sad that he isn’t a real elf; but Santa encourages him to find his father even though he’s on the naughty list as he doesn’t believe in Santa Claus, and he’s lost the Christmas spirit.

The thirty-year-old elf sets off on a journey by foot to New York City where his father lives with his wife and young son; his biological mother, a college sweetheart of his father’s, passed away years earlier.   He’s convinced his father is the best as he sings “World’s Greatest Dad.”  He arrives in NYC and sees signs for the North Pole and gets excited as he thinks he will see Santa and his elf friends, but he’s in Macy’s!  The cast segues into the number “Sparklejollytwinklejingley” as they get into the spirit to decorate for Santa, and Buddy sees an girl dressed as an elf (for work) named Jovie and he likes her.

His innocence and determination to find his father make Buddy likeable.  He soon turns up at his father’s book publishing office, but is met by snide remarks from the “Iceman,” which is how the office employees refer to Walter, Buddy’s father.   The cast sings the number “Just Like Him” as Buddy gloats over his likeness to his father. However, Walter doesn’t want anything to do with him, believing Buddy  is insane.  Eventually Buddy’s stepmother snags pieces of Buddy and Walter’s hair and sends them out to be tested, only to find out that the elf is definitely her husband’s son.   The family accepts him at this point and love with Jovie sprouts as they kiss at Rockefeller Center.   At one point, his father wants him to dress in a suit and Buddy asks if it can be red like Santa’s—moments like this happened throughout the show, adding a humorous element.

Santa lands in New York City but his sleigh fails as there isn’t enough Christmas spirit in the Big Apple; however, Buddy’s stepmother and brother see Santa flying around and become believers and eventually others become believers too, helping Santa and his sleigh.  Time is ticking as Walter needs to produce a children’s book that will be a blockbuster, or else he will be jobless.  It is then that Buddy steps in and offers his story, and Walter’s boss is ecstatic as they sing “The Story of Buddy the Elf.” The cast ends the show with “A Christmas Song,” dancing in Central Park.

The vibrant dancing and singing of the talented cast bring Buddy’s story to life, making the show a fun, memorable one with the message to believe in elves, Santa Claus, and the magic of the holiday season.