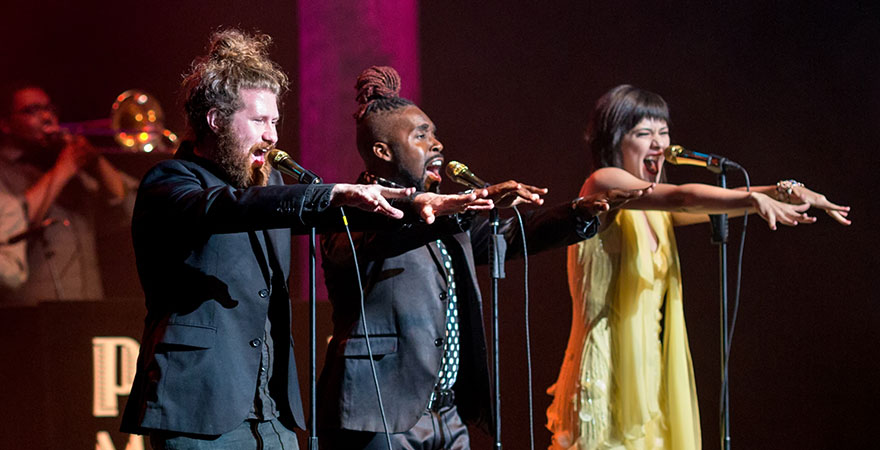 Scott Bradlee’s Postmodern Jukebox is a genre-busting, rotating collective of musicians and vocalists that re-imagines modern pop hits in the style of jazz, ragtime, and swing classics of the 1920s-1950s. As arranger and producer, Bradlee has assembled a multi-talented group of performers who rework versions of popular modern songs. The music videos of these collaborative covers have become viral sensations with millions of views on YouTube. Songs have included Miley Cyrus’ “We Can’t Stop” assayed as a doo-wop number; Macklemore and Ryan Lewis’ “Thrift Shop” tricked out in flapper jazz; and Sam Smith’s “Stay With Me” rendered as a 1940s big-band standard. Travel back in time with Scott Bradlee’s Postmodern Jukebox on February 8, 2017 at 8pm at State Theatre New Jersey as the jaw-dropping act crosses all musical boundaries and generations!

Postmodern Jukebox, also widely known as PMJ, was founded by arranger and pianist Scott Bradlee in 2011. In its first few years of existence, Postmodern Jukebox has amassed over 500 million YouTube views and 2 million subscribers. Each week, PMJ puts out a new video on YouTube, most of which are filmed casually in Bradlee’s living room. The band has covered songs by artists ranging from Lady Gaga and The Strokes to Katy Perry and the White Stripes. Since their beginnings as a small group of friends making music in a basement in Queens, New York, Postmodern Jukebox has gone on to feature 70 different performers and tour four continents.

With over 1 million views in its first week, and 4 million in its first year, Robyn Adele Anderson’s cover of Macklemore & Ryan Lewis’, “Thrift Shop” (2012) was Postmodern Jukebox’s first viral music video. The breakout track was included on Introducing Postmodern Jukebox (2013) and eventually found its way to a #8 position on Billboard Magazine’s Jazz Albums chart. This success was followed by her cover of Miley Cyrus’ “We Can’t Stop” in 2013, landing the band a performance spot on Good Morning America in September. In late 2013, Postmodern Jukebox was invited into the New York City offices of Cosmopolitan magazine to film a year-end tribute to 2013, covering the years hit songs with arrangements transitioning through various genres and time periods.

In 2014, guest artist Kate Davis performed a cover of Meghan Trainor’s, “All About That Bass” (2014), in Scott Bradlee’s living room after three hours of practice. The single was a success, catching the attention of Time magazine, Billboard Magazine, the Huffington Post, and PBS NewsHour. In 2015, Broadway actress Shoshana Bean became active with the group as a guest artist when Scott moved to Los Angeles. Broadway World raved about Bean’s performance of Sia’s, “Chandelier,” at the Segerstrom Center for the Arts in Costa Mesa, California, and Billboard did a feature story on her Motown makeover of Justin Bieber’s “Sorry.”

In February 2016, Postmodern Jukebox covered the late David Bowie’s classic song “Heroes” in honor of World Cancer Day—featuring vocals by Nicole Atkins. The track was sold on iTunes to earn money for the Cancer Research Institute. Heineken also announced their global partnership with Formula One racing management and in September released its first “If You Drive, Never Drink” campaign commercial featuring Sir Jackie Stewart (the “Flying Scot”) with PMJ’s cover of “Heroes” as the soundtrack. Join us at The State on February 8, 2017 at 8pm for a vintage musical experience with Scott Bradlee’s Postmodern Jukebox! 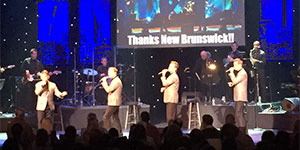 Midtown Men - Sixties with a Twist!