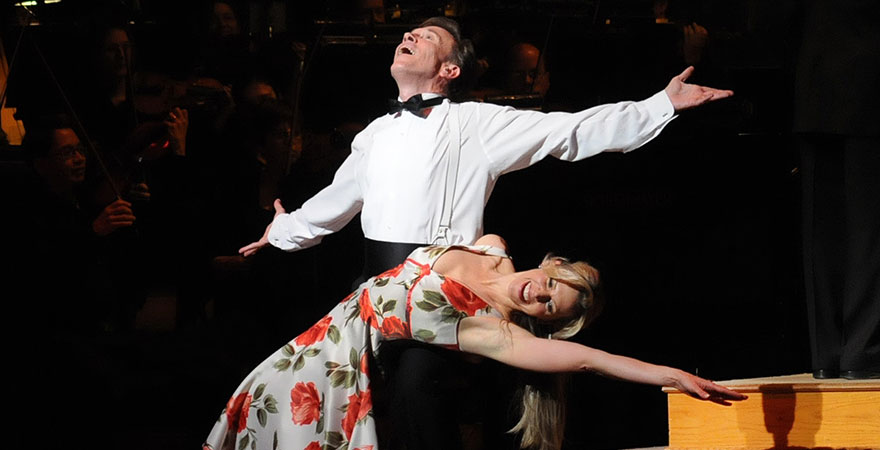 “Heaven, I’m in Heaven;” those lyrics bring you back to the golden age of Hollywood, don’t they? Featuring the New Jersey Symphony Orchestra with conductor Gemma New, Dancing & Romancing celebrates timeless classics of golden age Hollywood and Broadway musicals featuring tap dance routines inspired by the works of legends such as Gene Kelly, Ginger Rogers, and Fred Astaire. Already sweeping audience’s feet nationwide, Dancing & Romancing features such classic standards as: “Puttin’ On The Ritz,” “Smoke Gets In Your Eyes,” “Cheek to Cheek,” and more toe-tapping numbers! Performing these swingin’ songs on February 12 will be Joan Hess of Broadway’s Mamma Mia!, and West End veteran, Kirby Ward. There certainly won’t be a better way to celebrate Valentine’s Day weekend than with the ones you love at Dancing & Romancing.

The Laurence Olivier Awards® are presented to outstanding artists who’ve made great accomplishments in London’s West End, and to see even a nominee performing live in front of you, is just spellbinding. Olivier® Award-Nominated performer and dancer Kirby Ward, has directed and choreographed productions in New York and London, as well as performed in over 60 shows. As an actor, Ward has performed for The Queen of England and has played many of the World showrooms with luminaries that included: Phyllis Diller, Shecky Green, Debbie Reynolds, to name a few. His Broadway credits include the 1994 Broadway revival of Showboat (directed by multi-Tony Award®-winner, Harold Prince) and Never Gonna Dance, where he appeared in various roles. In London’s West End, Ward played Bobby Child in the West End premiere of Crazy For You, for which he earned an Olivier Award® nomination. As a director and choreographer, Ward was named Best Director for his work on regional productions of Singin’ In The Rain and Crazy For You. Ward also worked with James Caan and Bette Midler on choreography in filming the 1991 film, For The Boys.

Joan Hess made her Broadway debut in 1992, where she played “Patsy” in the Tony Award®-winning Crazy ForYou. Her other Broadway credits include playing Tanya in the smash-hit musical Mamma Mia!, as well as Sophia in Dirty Rotten Scoundrels and Hattie in Kiss Me, Kate. Hess was also a featured performer in Dessa Rose, and Bells Are Ringing. Hess has performed in many regional theatre productions such as Hello, Dolly! playing the role of Irene Molloy, The 25th Annual Putnam County Spelling Bee, playing Rona Lisa Peretti, and many others. When Hess starred as Ann in a regional production of The 1940’s Radio Hour, she received a regional theatre award nomination for Best Leading Actress. On television, Hess has appeared in the Grammy Award®-winning Flight of the Concords on HBO, The Killing Jar, and was featured in the PBS special My Favorite Broadway: The Love Songs, hosted by Julie Andrews. Hess is from Colorado and is married to Broadway performer, David Hess, with whom she appeared on the Travel Channel’s Fantasy Rails For Millionaires with touring England, South Africa, and Italy.

The New Jersey Symphony Orchestra has presented countless concerts that have amazed thousands of audience members with the sounds of classical and modern music all over New Jersey. From Tchaikovsky to Elton John, the orchestra never misses a note throughout their unique productions. In your typical Broadway show, the orchestra usually performs underneath or somewhere offstage, however, Ward and Hess will be sharing the stage with the symphony during this show, bringing back a big band style. For this Valentine’s Day weekend, after several years of touring around the United States, Dancing & Romancing will come to State Theatre New Jersey on February 12, 2017, and will truly be a memorable and nostalgic experience for audiences of all ages.