Talk To Me and Rock With Me, Johnny 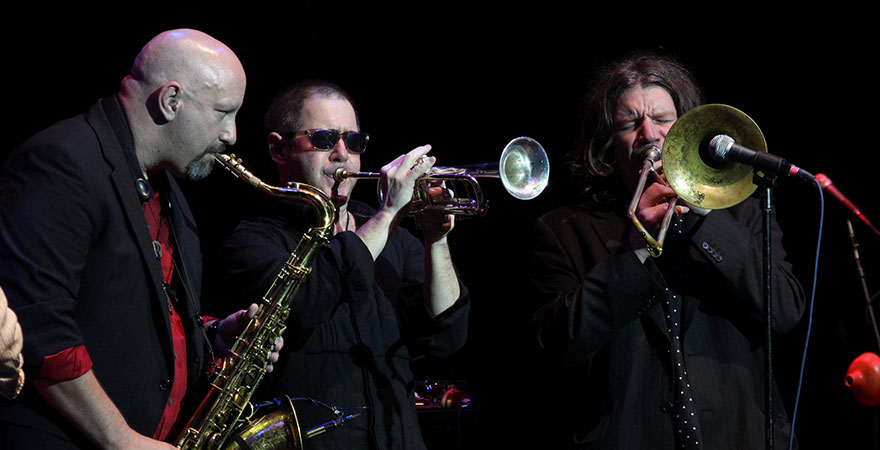 From the beaches of Ocean Grove, New Jersey to the heart of New Brunswick, Southside Johnny and The Asbury Jukes have spread their big brass, rock n’ roll sound across America and beyond for over 40 years. Known as the “Grandfather of the New Jersey Sound,” Southside Johnny has influenced many Jersey-based musicians including Jon Bon Jovi, Bobby Bandiera, and Steven Van Zandt. You may remember the band's upbeat R&B hits like “Talk to Me,” “The Fever,” “This Time It’s For Real,” as well as many others. Southside Johnny and The Asbury Jukes will blow the roof off of State Theatre New Jersey for one night only on April 1, 2017, so get ready to rock.

John Lyon, also known as “Southside Johnny,” was born in Neptune, New Jersey, growing up around the shores of Ocean Grove, New Jersey. There, he not only discovered his love for soul music, but made a name for himself within the Jersey shore music scene. It all started with two guys, a love for music, and a dream to share it. John Lyons and Steven Van Zandt started playing together in various bands across the Jersey shore. The bands were based out of the Upstage Club located on Cookman Avenue in Asbury Park, where Bruce Springsteen also started out. By 1972, Springsteen's current Band, The E-Street Band came together, and during this time, Van Zandt and Southside Johnny would often perform with them. Eventually, Van Zandt joined the band officially, but by 1974, Southside Johnny would form his own band that would have a combination of rock, soul, and blues. Gathering up about six other talented musicians, including guitarist Bobby Bandiera, the band would come to be known as The Asbury Jukes.

By 1975, The Asbury Jukes made a name for themselves not only throughout the Jersey Shore, but across America, representing New Jersey as a hip, partying kind of state with a taste for soulful R&B music. Southside Johnny released three albums within the first five years of his career:  Don’t Want To Go Home, which was released in 1976, This Time It’s For Real, which was released in 1977, and Hearts of Stone, released in 1978. Southside Johnny and The Asbury Jukes collaborated with Steven Van Zandt and Bruce Springsteen in arranging music, putting a creative, horn-filled spin on a few songs he had written not only for his band, but for the Jukes. In 1982, The Jukes’ album Hearts of Stone made Top 100 in Rolling Stone’s Best Albums of the 1970’s-1980’s.

In 1986, Southside Johnny collaborated with Bobby Bandiera, who, after leaving The Asbury Jukes joined Bon Jovi as a guitarist. Bandiera decided to give The Asbury Jukes a more heavy guitar sound so that the band’s brass would not only sound brilliant creating original riffs but would stun audiences with a much grander sound. In the 1980s and 90s, Southside Johnny and The Asbury Jukes’ music went on to be featured in many major motion pictures and TV shows such as: Home Alone, The Mighty Ducks, The Sopranos, and The Karate Kid II. He even served as technical director for a movie, Eddie and the Cruisers, which featured Tony Award® -winner Ellen Barkin.

The band line-up currently features Glenn Alexander on guitar, John Conte on bass, Chris Anderson on trumpet, John Isley on saxophone, Neal Pawley on trombone, Jeff Kazee on keyboard, and Tom Seguso on drums. In Jersey, we listen to their music on the beach, at a tailgate, or in the local bar, but for one night only, you can have all of those experiences and more when you witness the music live onstage at State Theatre New Jersey on Saturday, April 1, 2017 at 8pm with Southside Johnny and The Asbury Jukes.