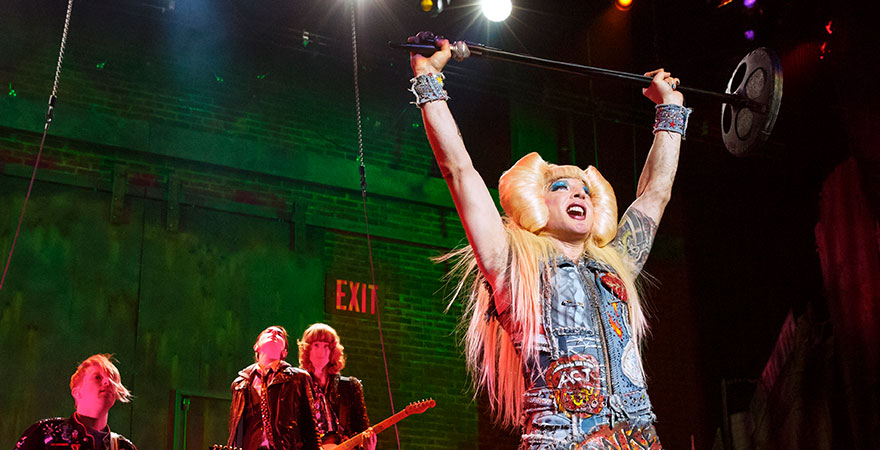 State Theatre New Jersey was packed on Friday night and everyone was excited for Hedwig and the Angry Inch. I had no clue what to expect, but when a couple next to me mentioned that a friend of theirs was seeing the show for the seventh time I figured it had to be good.

It was a six person cast that told the story of Hedwig’s (Euan Morton) journey from Berlin, Germany to America and then as a struggling star. Euan Morton was a force to be reckoned with on stage was perfectly accompanied by Hannah Corneau (Yitzhak). Backed up by the band inclusing Justin Graig (Skszp), Matt Duncan (Jacek), Tim Mislock (Krzyzhtoff), and Peter Yanowitz (Schlatko), all leading to a flawless performance. The music was stunning and carried the show, there was no need for set changes to tell the story.

Hedwig’s story is one of love, rejection, and acceptance.  She is forced to get a sex change to escape East Berlin by marrying  an America solider. A year later in America, Hedwig is divorced and so turns to her second love, music. It was a comedy with a message that is even more important with each passing day as we find ourselves surrounded by hatred and violence. Rejected by ones she loves, she is forced to make her own way in a country that she knows nothing about, making ends meet by preforming at coffee shops and dive bars with her band The Angry Inch. By the end of the show Hedwig seems to have come to accept herself and allows her husband Yitzhak to once again dress in drag, something she had forbidden him to do due to her fear of him overshadowing her.

Overall the show was amazing and if you did not get the chance to see the show at The State, I highly recommended that you find a show to go to, it is definitely a must see.