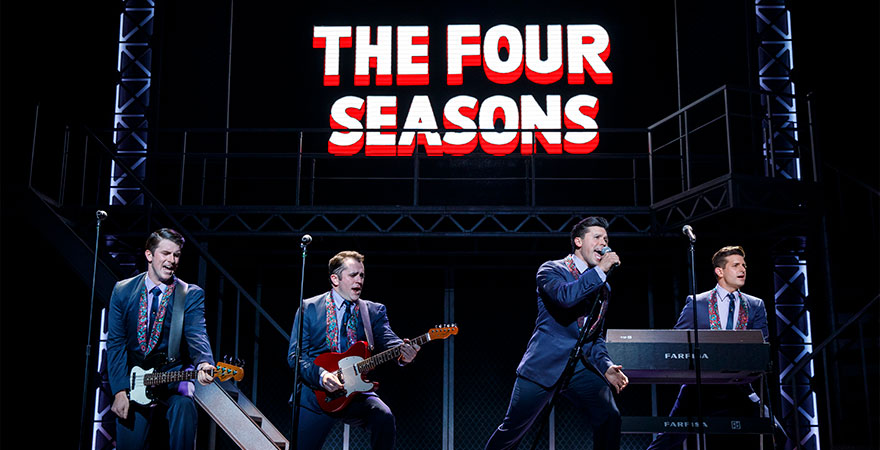 Forget about show-stopping finales. In Jersey Boys, the smash-hit musical about the rise and fall of The Four Seasons, the pinnacle of excitement comes about 45 minutes into the first act. That’s when back-to-back presentations of three of the group’s biggest hits—“Sherry,” “Big Girls Don’t Cry,” and “Walk Like a Man”—are greeted with enough thunderous applause to start a downpour.

“At that moment the audience has forgotten they’re watching four actors and they root for these four guys as though they really are The Four Seasons in their youth,” says Rick Elice, one of the show’s book writers.

It’s also somewhat surprising. After all, The Four Seasons may have been one of the most successful groups of the 1960s, but history hasn’t institutionalized them the way it other bands popular with that era’s counterculture. But Elice thinks that’s one reason why fans are so hungry for their music and the incredible story of four Italian-American kids from the wrong side of the NJ tracks who could just as easily have ended up in prison as on the pop charts.

“In many ways the band was a reflection of the people who were buying their records,” Elice notes. “They didn’t have long hair or accents. There was no glamour quotient to them at all, which is why they were never written about.”

Jersey Boys was born when Elice, for many years the creative director of Broadway advertising agency Serino Coyne, was contacted by a former client who had the option on The Four Seasons catalog. Elice had written a couple of plays and always wanted to work with Marshall Brickman, who was a poker buddy. But as they interviewed the three surviving Seasons, they faced a predicament over how to tell the group’s “true” story when they couldn’t even figure out what it was.

Elice and Brickman met with Bob Gaudio and Frankie Valli, the two Seasons who, way back when, formed a business partnership with a handshake that still stands today. “They started to describe what it was like to be blue-collar kids, first-generation Americans, Roman Catholic, high school dropouts who were flirting with careers in crime in an environment where people had two pictures on the living room wall: the Pope and Frank Sinatra,” Elice recounts. “It was the archetypal American rags-to-riches story: You start with nothing, achieve success, and then try to navigate your life through the waters of success.”

But when they contacted Tommy DeVito, the initial driving force behind the group until gambling debts put him on the outs with the mob, “He said, ‘Don’t listen to them, I’ll tell you what really happened,’” Elice recalls. That’s when they decided to structure the show the Rashomon way, by letting each character tell his own account.

Each Season narrates a portion of the story, including bass player Nick Massi, who died in 2000 and left the group at the height of its popularity without much explanation. Brickman and Elice drew their portrait of him from the memories of the other survivors. “There was a great mystery to Nick,” Elice says. “Today you would call him obsessive-compulsive with sort of a sideline in sexual addiction. In any group there’s going to be someone who’s off to the side.”

That gave them the chance to focus on the Tommy-Frankie-Bob dynamic that first propels The Four Seasons to the top of the charts and eventually breaks them apart. “This was really a love triangle—without any sexual component,” Elice observes. “There was Tommy, who discovered Frankie when he was a teenager and held the trio group of Tommy, Nick, and Frankie together when they were a cover band. Then Bob, this new, young talent came on the scene, and Frankie turned away from Tommy and turned toward Bob because Frankie and Bob were simpatico.”

Gaudio, already a songwriting prodigy when he joined the group, wrote or co-wrote many of the group’s signature songs, which accentuated Valli’s vast vocal range and commanding falsetto. DeVito, meanwhile, piled up a huge debt. But by then the Seasons were more than just a group: They’d become a family, and that put their loyalty to the test. “Tommy gave Frankie and Bob an opportunity to do what families always do,” Elice says. “No matter what kind of betrayals occur you always stand up for another person in the family because the ties that bind are so strong.”