Partnering with Bristol-Myers Squibb and the National Gay & Lesbian Chamber of Commerce, the State Theatre presented an exclusive screening of the powerful documentary Families Like Yours, a film exploring the lives of six LGBT families living in America. Welcoming members of the LGBTQ community, families, students, and multiple generations, it was a proud evening for the State Theatre and our LGBTQ Outreach Committee, who played a major role in the promotional efforts.

Before the film, the State Theatre’s LGBTQ Outreach Committee hosted a VIP reception with film partners, Bristol-Myers Squibb and the National Gay & Lesbian Chamber of Commerce, as well as film sponsor Wells Fargo. The group was welcomed by State Theatre’s LGBTQ Outreach Committee Chair Dave Retcher, who talked about his experience of seeing the film’s premiere in New York City and working to bring the film to the State Theatre for an exclusive screening before it makes its way to the Sundance Film Festival in January 2018.

“The selection process leading to this screening was a no-brainer. This documentary will make you laugh one second then make you cry the next. But most importantly, it will make you think about perceived differences between us and how hate causes misguided judgments about people who are no different than you or me or anybody. At the base of this hate is fear of the unknown and education and understanding debunks the unknown, leaving love and empathy in its place,” said State Theatre New Jersey Board Chair Scott Fergang in a recent Daily Targum article.

After the film, an emotional and heartfelt talk back was held—led by Paul Ashley, Director, Strategic Engagement, Global Procurement, for Bristol-Myers Squibb along with Sabrina Kent from the National Gay & Lesbian Chamber of Commerce and the Projector Director for the film—with one of the couples from the film, Jan and Diane. The discussion opened an engaging and important dialogue with the audience that truly made it a very special and unique event unlike any other in State Theatre history.

Jersey Boys opens the Broadway Season with a Bang

A Salute to Our Veterans with a Free Concert Event 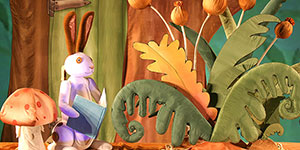