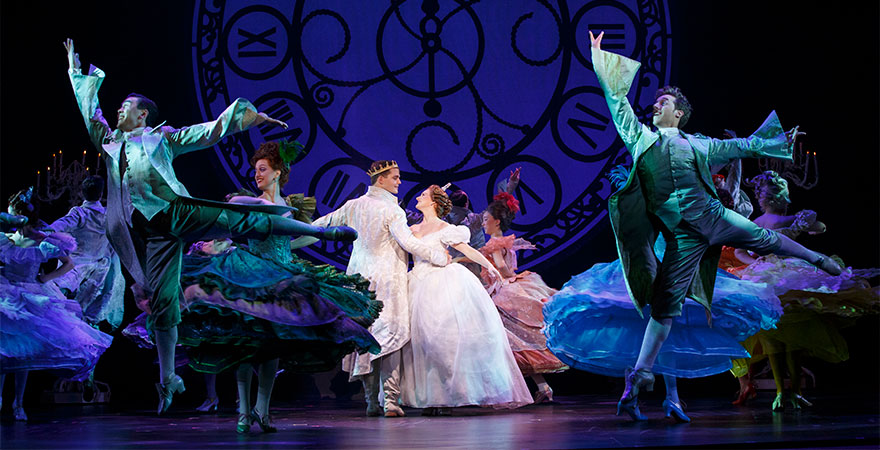 One of Rodgers and Hammerstein’s most beloved scores was not written for the stage, but for television: Cinderella. First aired on CBS in 1957, with a young Julie Andrews in the title role, it featured such classic songs as “Ten Minutes Ago,” “In My Own Little Corner,” and “Do I Love You Because You’re Beautiful?,” among others. “Rodgers and Hammerstein tapped into a timelessness in their score that has made people revisit it time and time again,” says Ted Chapin, president of organization that bears the songwriters’ names, “ it’s been remade twice for television; it’s been done in the theater in various ways.” But it wasn’t until 2013 this beloved story came to life on the Broadway stage.

The vision for this new Cinderella was to make her a more active character in her own fate. Playwright Douglas Carter Beane, writer of cheeky comedies like The Little Dog Laughed and the hit stage version of the cult film Xanadu, was brought on board to adapt the book. In addition to making Cinderella more active, Beane wanted to make the Prince less an ideal and more of a human being. “He needs somebody in his life to show him the right way,” explains Beane.

While many have commented on how Beane’s humorous script is revisionist, the playwright says he went back to the original source, Charles Perrault’s 1697 fairy tale, for inspiration. It was a thinly veiled satire of French politics, says Beane: “The court was overwhelmed with ridicule and sarcasm and Cinderella was kind, and brought kindness to the court.” Also, in the original version, Cinderella met the Prince several times and “actually saved the Prince from the viciousness of the court.” And, finally, in the original story, “one of the evil stepsisters, turned out to be okay; she helped Cinderella and even had a boyfriend,” says Beane. “And I was like, ‘Oh my gosh! That’s a Rodgers and Hammerstein second couple.’ Will Parker and Ado Annie, right there!”

In writing the new script, Beane says “it was all about tone. I knew that an audience, coming to see the show had to have a good time. And, they have seen so much; they have seen Wicked, they have seen Shrek, they have seen Fractured Fairy Tales. All these things have happened since this television version.” Beane says he knew “I had to have a little snark to it and I took inspiration from Oscar Hammerstein’s lyrics. He was using contemporary colloquial speech in these situations. ‘Why would a fella want a girl like her?’”

Since Rodgers and Hammerstein had only written songs for a 90 minute television musical, Beane scoured their catalogue for material which could fill out the score for a full-length stage version. He sat down with The Complete Lyrics of Oscar Hammerstein, and circled any lyric he thought might fit: “I found lyrics that corresponded to the story I was telling and prayed that Richard Rodgers had written music for it!” Working closely with Bruce Pomahac, the Rodgers and Hammerstein Organization’s music director, Beane found several little-known gems; among them, “Me, Who am I?,” a cut song from Me and Juliet, which was given to Prince Topher, and “There’s Music in You,” from the film Main Street to Broadway, which the Fairy Godmother sings.

Original Broadway director Mark Brokaw says he was immediately taken by Douglas Carter Beane’s approach to the material: “The first thing I thought was that Doug had done a fantastic job of taking the traditional story of Cinderella that everybody knows and keeping to the heart of it, but upending our expectations of who the characters were and how the story unraveled.” Brokaw created a lavish production, where Cinderella and her Fairy Godmother magically transform from rags to ball gowns, not once, but twice, aided by William Ivey Long’s Tony Award®-winning costume design. The result not only delights children, but adults, he says: “There really is something in it to appeal to everyone.”

And now, after the show’s successful two-year run on Broadway and the subsequent tour still delighting audiences across the country, it’s obvious this melding of superb traditional songwriting and a playful new script has found a sweet spot for contemporary family audiences. In Cinderella, princesses can save the world and kindness is celebrated above all, and those are sentiments everyone can embrace.  This Tony Award®-winning Broadway musical will be at State Theatre New Jersey for 3 performances only  February 9-10.