Step Right Up to the Circus with Mnozil Brass! 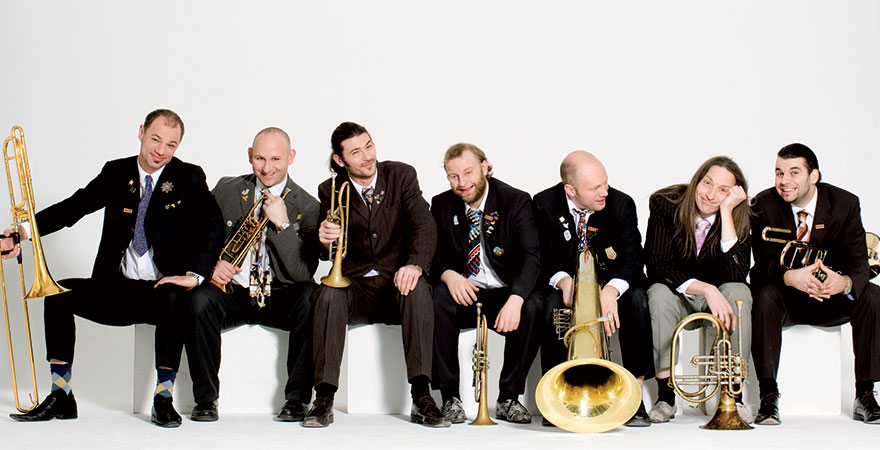 Ladies and gentleman, step right up! Marvel at the brilliance of Mnozil Brass’s “Cirque” at State Theatre New Jersey on February 22. This engaging cabaret promises to be musically dazzling, theatrically entertaining, and comedically bold!

Mnozil Brass has delighted audiences for 25 years. The ensemble started as a quintet formed in a tavern called the Josef Mnozil Inn in Vienna, Austria. There, across the road from the Vienna Conservatory, the student-musicians were brought together by the tavern’s monthly jam sessions and the promise of free beer. Since then, the group has added two members, recorded eight albums and six DVDs, and toured over 30 countries across the globe.

Audiences familiar with Mnozil Brass know how well the seven musicians master their instruments as well as how much fun they bring to the stage. Trumpet players Thomas Gansch, Robert Rother and Roman Rindberger, trombonists Gerhard Füssl, Zoltan Kiss and Leonhard Paul, and tuba player Alfred Wieder surprise and entertain audiences with a high-octane combination of slapstick comedy, cabaret, and extraordinary musical talent. Likened to a seamless fusing of Dizzy Gillespie and Jim Carrey, the group’s choreographed dance moves, witty improv, and comedic antics have led critics to describe them as “the Monty Python of brass music.”

At the heart of this septet is their music, which is absolutely first-class. A Mnozil Brass show displays “the most stellar brass players you might hope to encounter,” playing “the finest brass on the planet.” The ensemble’s concert programs span the musical spectrum from Franz Shubert to Frank Zappa. Their repertoire mixes musical styles and genres from classical works to drinking songs, from jazz and pop to movie soundtrack classics. A sweet a-capella of "Mr. Sandman" may become a fast rap number and segue into Metallica's "Enter Sandman."

A Mnozil Brass concert is a visual as well as a musical act; the troupe’s on-stage theatrics equal their musicianship in entertainment value. The seven make ample use of props and costumes, dressing as clowns and ringmasters, snapping castanets as they dance flamenco-style, and sporting terminator eye patches for a robotic-interpretation of the Beverly Hills Cop theme song. Trombonist Leonhard Paul theatrically strips off his yellow socks and plays two trombones and two trumpets with his feet and hands, then hangs suspended in midair after his chair is snatched out from under him.

Whether the group begins mimicking the high pitched falsetto of the Bee Gees or breaks into Michael Jackson’s “Thriller” dance, the only certainty at a Mnozil Brass performance is the audience can expect the unexpected. “Our audience never knows what is going to happen in our show,” muses Thomas Gansch, “and I think they like that!”

Come one! Come all! Step right up as State Theatre New Jersey welcomes Mnozil Brass “Cirque” on February 22, 2018 at 8pm. Prepare to be amazed!