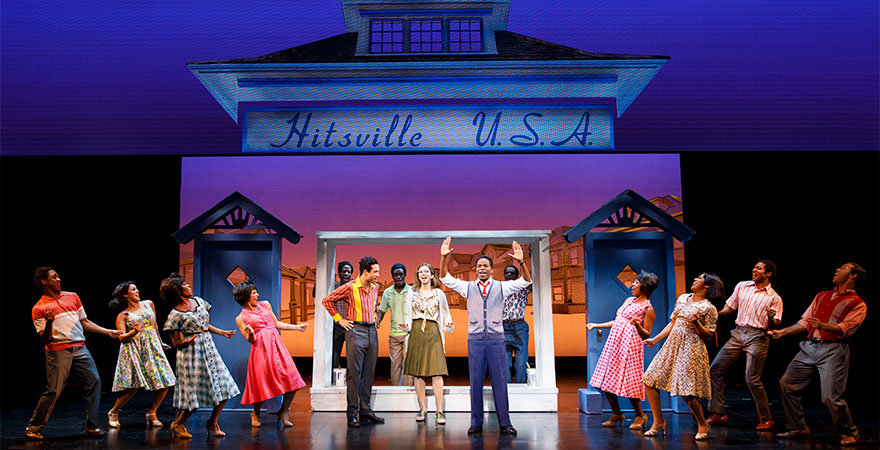 On January 12, 1959, Berry Gordy Jr. obtained a loan of $800 from his family and founded an enterprise he called Motown. He set up his Detroit headquarters in a modest house emblazoned with an immodest sign, “Hitsville U.S.A.” The slogan was premature, but prophetic. The company had its first hit record in 1960, and between 1961 and 1971 landed 163 singles in Billboard magazine’s top 20, including 28 songs that reached No. 1.

Gordy discovered, developed, and launched the careers of Smokey Robinson and The Miracles, Diana Ross and the The Supremes, The Temptations, Stevie Wonder, Mary Wells, The Jackson 5, Michael Jackson, and Marvin Gaye—to name just a few—and Motown became the most successful business owned and operated by an African American in the United States.

What Gordy accomplished had ramifications far beyond the world of music. Now his legacy is celebrated in Motown The Musical. “Berry Gordy is the Steve Jobs of the music field,” says Doug Morris, CEO of Sony Music Entertainment and co-producer of the show. “He’s the No. 1 creative executive in the history of the industry, an amazing American success story who changed the culture of the country.”

Although Motown was home mostly to black artists, Gordy envisioned the music as “the sound of young America”—and by that he meant Americans of all colors and ethnicities. He started Motown just before the civil rights movement was in full flower, when neighborhoods throughout the country remained segregated and music by black artists was mostly relegated to black radio stations.

But Gordy “endeavored to reach across the racial divide with music that could touch all people,” as the Rock & Roll Hall of Fame acknowledged. And so he did. Motown’s success didn’t happen by wishful thinking, and it didn’t happen by magic. A brilliant entrepreneur with impeccable artistic taste, Gordy signed the best singers, hired  the best musicians, the best songwriters, the best producers, and the best staff to “create, make and sell” irresistible songs with universal appeal.

It began, of course, with the sound, a thrilling amalgamation of gospel, blues, jazz, doo wop, and country. “I may not have always known what I was looking for exactly, but when I found it I knew it,” Gordy has said. The instrumentation was unique, incorporating distinctive bass lines with everything from tambourines to saxophones to drums to three or four guitar lines, to orchestral strings. “Long before there were electronic synthesizers, I was looking for new ways to create different sound effects. We would try anything to get a unique percussion sound: two blocks of wood slapped together, striking little mallets on glass ashtrays, shaking jars of dried peas—anything. I might see a producer dragging in bike chains or getting a whole group of people stomping on the floor.”

In the early 60s, when Motown was evolving and beginning to hit its stride, radio play was crucial to a song’s success. And to that point, white pop radio stations had only sporadically embraced recordings by black artists. Gordy recognized that he needed an experienced, respected, well-connected point man who could infiltrate and shatter the color line of the airwaves, and in 1960 he brought on Barney Ales as vice president of distribution and sales. Ales had been a branch manager at Capitol records in Detroit, then had his own record distributorship, and had relationships with disc jockeys and stations, black and white, all around the metropolitan area.

Robin Seymour, Detroit’s most popular radio personality of that era, was perhaps the only white disc jockey in the city to feature black music on his shows in the 50s, prior to the founding of Motown. “When Berry Gordy came along, I started playing his records,” says Seymour. “Some of the sponsors hated the music, but they had kids and their kids thought it was the greatest music ever. The sponsors were getting results, so they were happy. The music really took off. Being a Detroit company, they started getting noticed and became part of the city. And then the music spread all over the country.

In those days, according to Seymour and Ales, radio stations on the East and West Coasts would not play a new record until it had been a hit in Detroit or Chicago or Cleveland. “The record had to be pretty high on the charts before a song was played in New York, regardless of whether the singer was black or white,” says Ales. “Later in the 60s, when Motown had made it big, that changed. Stations would play a new record by a new artist.”

Seymour adds, “White disc jockeys around the country were eager to get and play this music. We communicated with each other. If I had a record I really liked, I’d call a disc jockey, say, in Boston on the big station there, and say, ‘You’ve got to hear this record.’ And he’d call the distributor to get a copy. Because the disc jockeys wanted to be connected with records and artists and songs that became hits, so they could say, ‘First introduced on our show.’”

Motown’s artists not only became a staple on mainstream white radio stations, but the top venues around the world. Success bred success, the result of outstanding product and strong marketing and promotion. “What happened with Motown wasn’t natural,” says Ales. “People think Motown was lucky, but that wasn’t true. We worked at it. For instance, I signed a deal with Columbia Record Club, a mail order club that had a lot of prestige. No other black company ever had a deal with them for an entire label. So we were seen as a major record company as opposed to a company that just had hit records.”

Motown gradually became part of the fabric of America. “Music really makes the world vibrate,” says Morris. “And when multi-cultures vibrate together, it’s a great thing. That’s what Berry Gordy made happen. His music changed the world. See how it happened live in Motown The Musical March 23-25 for 4 shows only!