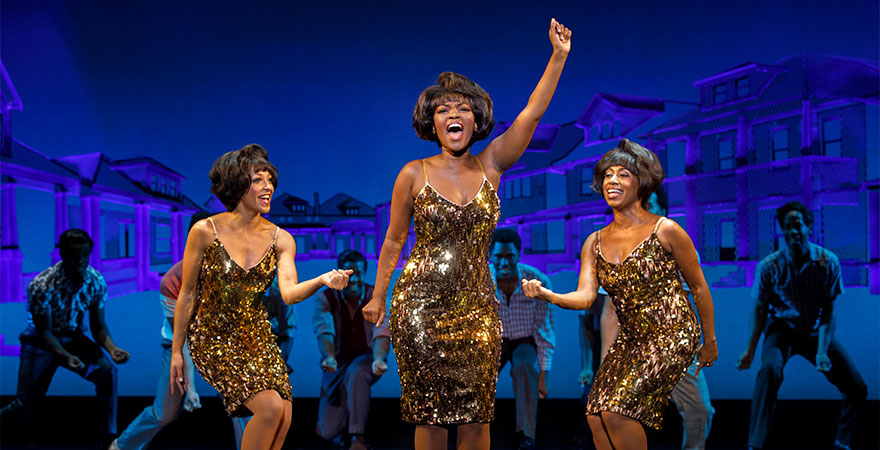 They were two diminutive dynamos, one a couple of shades under five feet tall, the other a shade over. But what they lacked in size they made up for in stature. Smart and wise, tough and tender, super confident and super competent, Esther Gordy Edwards and Maxine Powell were two towering figures in the history of Motown.

Berry Gordy was, of course, the visionary leader and driving force behind Motown. As Motown The Musical indicates, Gordy methodically plotted Motown’s course, and one of his great skills was choosing the right people to help him build a company that would ultimately break down barriers and achieve mass market success. That several of the key players were women was unusual: Motown took off in the early 60s, a time when women were largely invisible in the business world unless they were secretaries.

In the beginning, Gordy employed all four of his sisters. On the surface that might seem like nepotism run amok, but it wasn’t. At the time that Motown was founded, Esther, Anna, Loucye, and Gwen were all far more accomplished than their younger brother. They brought sophistication and considerable entrepreneurial skill to a variety of roles when Motown was getting off the ground.

But it was the remarkable Esther Gordy Edwards (1920-2011) who had the greatest impact of all the sisters. Edwards, who had attended Howard University and Wayne State University—the first of the eight Gordy children to go to college—was involved in virtually every aspect of Motown and served for many years as senior vice president and director of international operations, negotiating deals with EMI to distribute Motown records in Europe and the Far East. “She had a head for business,” says her granddaughter, Robin Terry, Chairwoman of the Motown Museum. “She understood how to grow a business, how to be smart in business, and how to protect a business.”

In fact, she had doubts that her brother, Berry, was a good risk when he asked  for an $800 loan from the family’s co-op to start a record company. “She was the voice of reason,” says Allen Rawls, the museum’s interim CEO. “She was a savvy, professional woman, he was a dreamer, and dreams didn’t always come true.” As Motown the Musical illustrates, it was Edwards who insisted her brother sign an IOU, “and it had to be paid back with six percent interest.” The promissory note is on display at the museum.

Terry says her grandmother referred to herself as Motown’s “Gal Friday,” because when she initially joined the company she did whatever was needed. As Motown evolved, her responsibilities grew more specific. She managed and mentored many of Motown’s young artists and, together with Maxine Powell, served as chaperone when her underage charges went on tour. “She got a lot of fulfillment from personally managing artists because she loved them,” says Terry. “She was responsible for getting Stevie Wonder accepted into the Michigan School of the Blind. She set up his trust fund and got him a tutor. She and Stevie had a very special bond; he truly considered her a second mother.”

Edwards was a force not just in Motown, but in Detroit and beyond. She was the first woman elected to the board of both the Detroit Bank of the Commonwealth and the Greater Detroit Chamber of Commerce. Politically aware and involved—her husband was a Michigan state representative—she traveled to Washington, DC with Michigan Governor G. Mennen Williams to urge John F. Kennedy to run for president.

Perhaps her greatest legacy is the Motown Museum, which she founded in the Hitsville USA house that served as the original studio and company headquarters. Without knowing why, Edwards had saved all sorts of documents and memorabilia from the earliest days of Motown. “She somehow knew that what she had was unique and important,” says Terry.

When Motown made the move to Los Angeles, Edwards stayed put—Terry says she was “a fierce Detroiter”—and one day in 1981 she looked out the window and saw dozens and dozens of British sailors on the Hitsville lawn. “It was at that point that the meaning behind all that she had saved became clear. This was actually something people wanted to see.” The museum was established four years later.

The artists of Motown were known not just for their talent, but for the classy and professional way they presented themselves on- and offstage. This was very much part of Berry Gordy’s strategy. He decided that Motown should have a finishing school—something no other record company has ever done—and his sister Gwen suggested he hire Maxine Powell (1915-2013) to supply the finish. Known for her elegance and class, she had established the very successful Maxine Powell Finishing and Modeling School in 1951, and counted Gwen and Anna among her students. Through Powell’s efforts, Gwen became the first African-American model at the Detroit auto show.

Powell closed her school and joined the Motown team in 1964, teaching what she called “personal development and growth.” Says Terry, “One word you never used in conjunction with Maxine Powell was ‘etiquette.’ It would ruffle her feathers. Even though what she taught had to do with how you walked and how you sat, she was teaching people how to just be. She believed that if you worked on what’s on the inside, it would show up on the outside, and that made you more dignified, more graceful, more beautiful, more natural.”

Most of Motown’s artists came from humble beginnings, and Powell saw them as diamonds in the rough that needed polishing. “Some of them were from the projects, some were using street language, some were rude and crude,” she said in an interview. “With me, it’s not where you come from, it’s where you’re going.”

Powell mentored her charges in social graces and comportment, and worked closely with choreographer Cholly Atkins when he created dance routines. “She made sure the routines for the women were ladylike,” says Rawls. “She’d say, ‘Young women dance with their feet and not with their buttocks.’ She told the artists she was preparing them to perform before kings and queens. The response from many of them was, ‘We don’t care about that. All we want is a hit record.’ But the proof is in the pudding, when you see a picture of the Supremes being presented to the Queen Mum. So I think all of them, to a person, appreciated the mentorship that they got from her.”

Powell was instrumental in improving the showmanship of a resistant Marvin Gaye, who tended to sing with his eyes closed. “It looked like he was into himself as opposed to the audience,” says Rawls. “He was a handsome guy with a great voice, but she recognized that there was something missing from his stage presentation, something that could take him to the next level. It took some convincing, because Marvin was a stubborn person. But if you look at clips of him, you can see that he got it.”

Powell left Motown in 1969 and went on to teach courses in personal development at Wayne County Community College for almost 15 years, More recently, she worked part time as an assistant to Martha Reeves, one of her former Motown students, when the one-time lead singer of the Vandellas served on the Detroit City Council. Until the end, Terry says, “Professor Powell never stopped teaching.”

Both Powell and Edwards left behind countless numbers who benefited from their tutelage and wisdom. A few years ago, Rawls and his wife escorted Powell to a show about the early days of Motown called Now That I Can Dance. “About a dozen Motown alumni showed up, and they were introduced at the end of the production,” he says. “Then they introduced Maxine Powell, and she got a standing ovation. She’d become a legend.”

Terry says that to this day she hears from people, especially women, whose lives were impacted by her grandmother. “Very influential women, CEOs, come up to me and tell me how my grandmother helped them or mentored them,” she says. “Black, white, it didn’t matter. They credit her with helping them navigate uncharted waters. She was a true pioneer.”

Learn all about these powerful women and see the story they influenced live in Motown The Musical March 23-25 for 4 shows only!