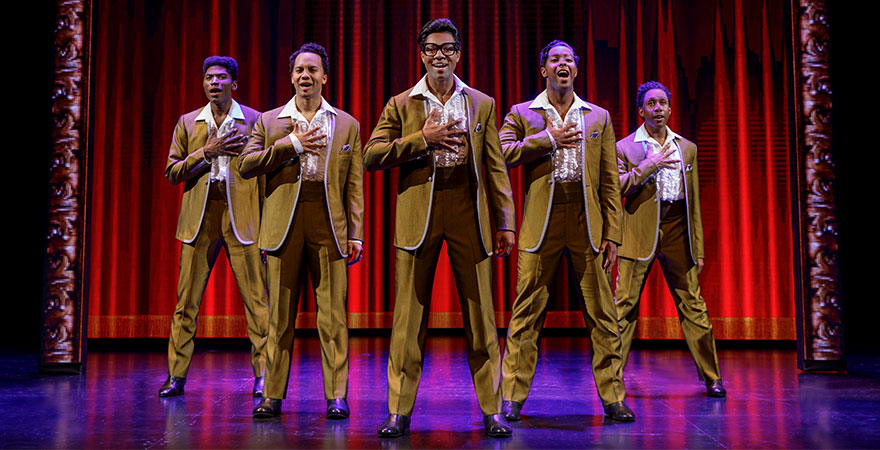 A whopping 58 songs are featured in Motown The Musical! Here they are from A to Z.

“ABC” - The song made famous by the Jackson 5 and launching them into superstardom after their performance on The Ed Sullivan Show.

“A Breathtaking Guy” - The Supremes

“Ain’t No Mountain High Enough” - Marvin Gaye and Tammi Terrell where the first artists from the Motown label to record this hit in 1968. It would become a hit again in 1970 when it was covered by Former Supremes frontwoman Diana Ross.

“Can I Close the Door (On Love)” - Written by Berry Gordy, Jr. and Michael Lovesmith for Motown The Musical.

“Cruisin’” - Written, produced, and performing by Smokey Robinson. This smash hit took 5 years to write and came together after Robinson moved to Los Angeles and was driving down Sunset Boulevard listening to a song by The Rascals called "Groovin'."

“Dancing in the Street” - Originally performed by Martha and the Vandellas and written by Marvin Gaye, William Stevenson, and Ivy Jo Hunter, this song would continue to grow in popularity with covers by The Mamas & The Papas and Mick Jagger and David Bowie.

“Do You Love Me” - The Contours
“Get Ready” - The Temptations
“Give It to Me, Baby” - Rick James
“Good Morning, Heartache” - Original Billie Holiday, covered by Diana Ross
“Got a Job” - The Miracles
“Happy Birthday” - Stevie Wonder
“Hey Joe (Black Like Me)” - Written by Berry Gordy and Michael Lovesmith for Motown The Musical
“I Can’t Get Next to You” - The Temptations

“I Got the Feeling” - Today
“I Hear a Symphony” - The Supremes
“I Heard It Through the Grapevine” - Marvin Gaye
“(I Know) I’m Losing You” - The Temptations
“It’s What’s in the Grooves That Counts” - Written by Berry Gordy, Jr. for Motown The Musical.
“Itsy Bitsy Teeny Weeny Yellow Polka Dot Bikini” - Bryan Highland
“I Want You Back” - The Jackson 5

“I Wish” - This #1 hit was performed, written, and produced by Stevie Wonder. The song was sampled in 1999 by Will Smith in the song "Wild Wild West" for the feature film of the same name.

“Lonely Teardrops” - Jackie Wilson
“Love Is Here and Now You’re Gone” - The Supremes
“Mercy, Mercy Me (The Ecology)” - Marvin Gaye
“Money (That’s What I Want)” - Barrett Strong
“My Girl” - The Temptations
“My Guy” - Mary Wells
“My Mama Done Told Me” - The Miracles
“Please, Mr. Postman” - The Marvelettes
“Reach Out (I’ll Be There)” - The Four Tops
“Reach Out and Touch” - Diana Ross
“Reet Petite” - Jackie Wilson
“Remember Me” - Diana Ross

“Shop Around” - Performed by The Miracles and written by Miracles leader Smokey Robinson and Motown Founder Berry Gordy,  this was Motown's first Top 10 single in the U.S., not to mention the label's first million-seller.

Don't miss these songs and more in Motown The Musical March 23-25!