Join us for "the Salsa Experience!" 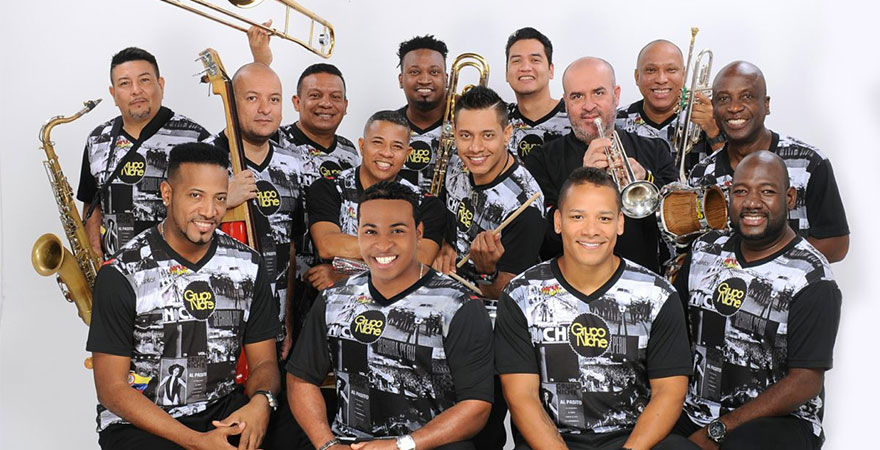 Comprised of young musicians from Chocó, a state on Colombia’s Pacific Coast, Grupo Niche was conceived as a new, alternative salsa band with a big, aggressive sound. Bandleader and composer Jairo Varela created a unique salsa founded on African beats and characterized by fast tempos, an assertive brass section, and well-crafted lyrics. The band broke away from conventional salsa, mixing traditional percussion of cowbells, timbales, and congas with modern instrumentation such as keyboards and electric bass and leveraging its large size to create richly textured music.

With songs that navigate from feel-good partying to romance to social consciousness, Grupo Niche put Colombia on the map of the world of salsa from the 1980 release of their debut album “Al Pasito.” The festivals, traditions and energy of Colombian cities served as a vibrant source of inspiration. The musicians found their first major success with the hit single “Buenaventura y Caney,” an homage to the coastal city of Buenaventura. After relocating to Cali, they released “Cali Aji” and followed up with their “tribute to the world salsa capital:” “Cali Pachanguero.” “Cali Pachanguero,” now considered Grupo Niche’s signature song, was named “one of the greatest Latin songs of all time” by Billboard magazine.

Pride in the culture that emerged from the heart of plantation Colombia radiates through the band’s songs and lyrics. Their music represents “the essence of the Latin American streets,” employing the language of the barrio and giving voice to the working class. Their songs celebrate the culture of their homeland while also addressing social issues such as exclusion, marginality, and poverty. The passion displayed in their sensual romantic ballads has earned Grupo Niche the title “kings of romantic salsa.”

Grupo Niche continues to produce music that dominates the tropical song and album lists, seducing the global public with their vibrant sound. Join the celebration when the band recognized as “the Salsa Experience” performs at State Theatre New Jersey on Friday, April 13, 2018 at  8pm!