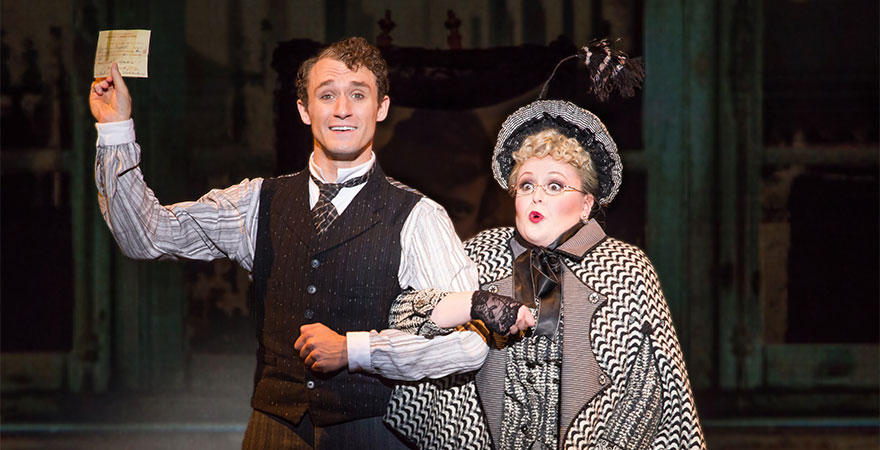 A Gentleman's Guide to Love and Murder will be here before you know it for three shows only April 6-7  and we have  an in-depth interview for you with the composer Steven Lutvak and the book-writer Robert Freedman!

I just wanted to talk to you about the whole process of putting Gentleman’s Guide up on Broadway and winning the Tony Award®.  As they say in The Sound of Music, let’s start at the very beginning.  How did you two get involved with this piece?  And how long ago was it?  It was a while.

RF: Well, we met in the graduate musical theater writing program at NYU [in 1981].  We became friendly and we had threatened to work together for a long time.  We were looking for something and we worked on another show for a while and then, Steve had seen this movie, Kind Hearts and Coronets, on TV…

SL: I was in college.  It was 1978 or ’79 and I wasn’t sleeping, so I turned on my black and white television and two or three channels in, there was this movie and I went, “Oh yeah, that’s Kind Hearts and Coronets; that’s one of my dad’s favorite films.”  And I literally bolted upright in bed, smacked my forehead and said, “Oh my god, it’s a musical.” Now, I know that sounds incredibly ridiculous and hyperbolic and over-the-top dramatic, but it’s really what happened.  And I happened upon a copy of the script and I remember thinking “it lays out like a twisted version of Oklahoma!”  There are two women, with a man in the middle, and one of them is married to somebody else. So, it felt like it had the shape, even to my teenage mind, of a traditional musical, yet with this very particular, weird, dark tone laid on top of that.  And I tried to get the rights to the film several times and then finally did.  And then we wrote Kind Hearts and Coronets, the musical.

But, despite developing the show at Sundance, and winning the Kleban and Fred Ebb Awards, and having several successful readings, the rights holders didn’t allow you to proceed.

SL: Kind Hearts and Coronets happens to be based on a novel that happens to be in the public domain.  When we got into hot water with the film company, which rescinded its offer, we went back to the novel.

RF: It’s called Israel Rank: The Autobiography of a Criminal [by Roy Horniman], which we had read, from the very beginning.  And we decided to take out everything from our show which was in the film, but not in the nove—which left plenty because we had already made up a lot of stuff.  And we hired a terrific copyright lawyer who vetted everything and gave us advice and we didn’t take any chances; we made sure that there was NOTHING from the film. And that turned out to be a blessing in disguise.

Can you give me a sense of what that means?

SL:  We found a few nuggets in the novel that were interesting and helpful.  And when we had to go back and rewrite the show, it was enormously freeing to us, actually, because we had not only to sidestep what we couldn’t use, but it freed us up to be wilder in our choices.

RF:  There are eight people who die in the movie and eight people who die in our show.  But there are differences in the occupations and the personality profiles, the identities of the people that get killed. They’re all members of one family, but we couldn’t use anything from the movie that wasn’t in the novel.  The murders in the novel were either not as dramatic or not funny and one was terribly tragic, in a way that you could never make comic.  So, we just had fun making up new identities and new ways for them to die!  It wasn’t just who they were, but how they died.  And I think not being allowed to use the stuff in the movie just liberated us.

Right before a production was scheduled in La Jolla in 2009, you were hit with a lawsuit from the movie’s rights-holders.

RF: That was really an awful time.  And this process took 13 months and the judge dismissed a lot of the points that they had in their lawsuit.  It came down to one issue, which is: could we have one actor play all the people in one family who get murdered?  That wasn’t in the novel, because it wasn’t a theatrical performance, but it was in the film.  Our attorney basically argued that, since theater began, that kind of thing’s been happening.  And the judge dismissed the case, outright, in March of 2011.

Let’s talk about the show and the way you two put it together.  Let’s talk about the appeal of this piece, because it’s a very, very funny show, but it also has an edge.   You guys are constantly playing with is this question of how to make sort of hateful people likeable; or hating somebody enough, but enjoying them enough, that you want to see them die in interesting ways!

SL:  Well, we were very careful about that; we need to make the D’Ysquiths all odious enough that you didn’t mind seeing them killed off.  We needed to write Monty [the protagonist] sympathetically and we needed to cast Monty sympathetically.

RF:  I think there are certain things about his predicament in life that are inherently sympathetic and that anybody can identify with; he’s an underdog and, not only did he grow up poor, but he was denied the kind of life that he should have been born into and should’ve had.    His mother sacrificed everything for him and she basically died having suffered a great deal.  Also the one girl he loves won’t marry him because he’s poor and has no position.  So he realizes this was all caused by this family that rejected his mother.  I think there isn’t anyone who hasn’t fantasized about getting revenge.

We also felt the way to help him be more sympathetic was to make sure all the people he killed were as loathsome as possible.  And they’re all loathsome in different ways, but in kind of the same way, in their attitude toward the little people, and their arrogance, which is silly.  They’re all silly people, too.

RF:What all this discussion doesn’t include, and which you mentioned, is that it’s funny!  Steve and I had a tremendous amount of fun writing it and we just wallowed in the language of it and the attitude of it and the tone.  We kept making sure that we were keeping everything consistent in tone.  And we just cracked each other up writing lyrics. We wrote lyrics together in the same room, which some people can’t conceive of, but that’s exactly how we did it.  And so it was fun!  It wasn’t like he took one song and I took another song, we really wrote them together.  And I think that’s probably why the whole thing seems of a piece.

SL:  As time has gone by, I realize that what we are, in a way, is a very low comedy in a very fancy box.  There’s all that faux classical music and it’s all very proper and it’s Edwardian England and the women are all corseted and everything is buttoned up.  But, in reality, it’s a low comedy—it’s a Bert Lahr, laugh-your-ass-off comedy, which I didn’t realize while we were writing it.

One of the things I love about the show is its utter theatricality.  You’ve got this chorus of six, playing all the other roles, and you’ve got this fantastic stage within a stage; you’re doing scenes in front of it and you’re always curious about what’s going to be revealed when they open that curtain.  And that’s very much about your collaboration with director Darko Tresnjak—I wonder if you can talk about the fun of the staging.

RF:  I think Steve and I are incredibly lucky that Darko and his design team worked on the show.  First of all, Darko, at the very beginning, just completely understood what we were going for.  And then he met with Alexander Dodge, our set designer, and they came up with this toy theater idea.  The thing that we contributed is we thought it ought to be performed—and it was written to be this way, too—as if it were being performed in the time it takes place.  And I think what Darko did is he not only did that, but through the use of projections, he found a way to make it modern at the same time that it was clearly Edwardian; you sort of feel like you’re in that time and place, but there’s a modern element to it.

What was it like, that night in June, when you guys won the Tony Award® for Best Musical? (And Robert won the Tony® for best book?)

RF:  It was the most incredible thing and it’s surreal and it’s wonderful.  And opening night was wonderful and just the fact that it’s still running is incredible.  Sometimes, when I was in the neighborhood, I’d pop in and watch the last ten or 15 minutes of the show.  There’s nothing in the world like the feeling, and this makes me cry even when I talk about it now—it always moves me, when I’m in the theater, it never fails to, when people react to the show at the end; just the overwhelming excitement of the audience and the fact that I’ve been part of something that I’m sharing with people, with strangers and that they are reacting to it the way that they are with incredible enthusiasm.  By the end people are just overwhelmed and thrilled and it’s just so exciting.  It’s THE thing about the show that’s the most meaningful to me; feeling that from the audience and knowing that I’ve been a part of it, of a shared experience like that.  There’s nothing like it in the world.  And, as exciting as winning the Tony® was—and I don’t mean to in any way diminish that, it was amazing and somehow, unreal—but that feeling from the audience is miraculous and wonderful and moving to me every single time.

Don't miss your opportunity to the laugh-out-loud comedy A Gentleman's Guide to Love and Murder April 6-7 at State Theatre New Jersey!