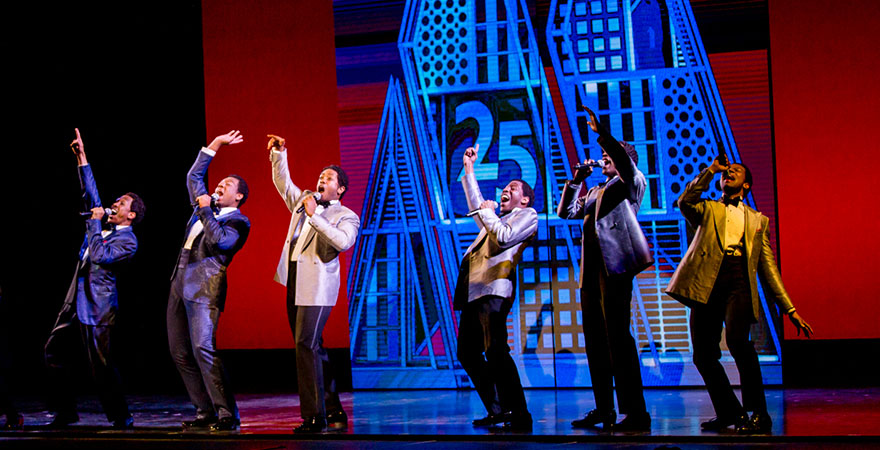 State Theatre New Jersey was hopping this past weekend with Broadway’s Motown The Musical. It was a packed house and the talented cast, stunning scenery, and glittery costumes made for a fabulous show.  The cast was in town the entire weekend. They sang segments of over 50 Motown songs and the crowd loved it.

The show is based on Berry Gordy Jr.’s autobiography To Be Loved: The Music, the Magic, the Memories of Motown (1994). In addition to the history of the legendary record company, it also includes his personal and professional relationships with Motown artists such as Diana Ross, Smokey Robinson, Marvin Gaye, and Michael Jackson.

In 1959, he founded Tamla Records, the first Motown. The genesis of it began in 1938, when Joe Lewis knocked out Max Schemling and eight year old Berry learned that a black man could be something great. He vowed to be great too and the song "Hey Joe (Black Like Me)" captured what the young boy felt in 1938.

He needs money to begin his recording company and his mother agrees to give him $800.  He tells her that he won’t ever give up his dream whether he’s 29, 39, 49, or 59. And the dream is to open a record company and the beginning was Hitsville U.S.A., his first studio in Detroit, Michigan.

Weaved with the social and political woes of the day, the story is alive with American history from the time when blacks and whites were separated. The wound of that separation is one that Berry feels Motown music brings together.  Marvin Gaye’s "What’s Going On" was soulfully sung and is a definitive song for the unrest and upheaval of American society at the time.  He struggles with Gordy who doesn’t want his singers to become political, but he eventually gives in and let’s Marvin do his thing.

The entire songbook of the musical was spectacular some highlights were the Jackson 5’s "I Want you Back," the Supremes "Stop in the Name of Love," "Dancing in the Street,"  and "Please, Mr. Postman."  The killing of Martin Luther King Jr. and President Kennedy sent shockwaves throughout American society and a photo montage of them captured those tumultuous times. Other highlights from the era flashed on the screen, including U.S. troops going to Vietnam.

In 1959 he’s divorced from his first wife and he likes the new talent with the big eyes, Diana Ross. Their love affair is depicted from the beginning to the ending.  At some point, the stars he brought to life leave Motown for more lucrative contracts with other companies, eventually the record company shrinks. In 1967 after the Detroit riots, Berry moved the company to LA. The company has gone through some incarnations, but is still alive.

The cool and joyful sounds of Motown music was the perfect medicine for a difficult time in American history. The company launched many careers and delivered music that united a nation. It will forever be a part of America’s story.