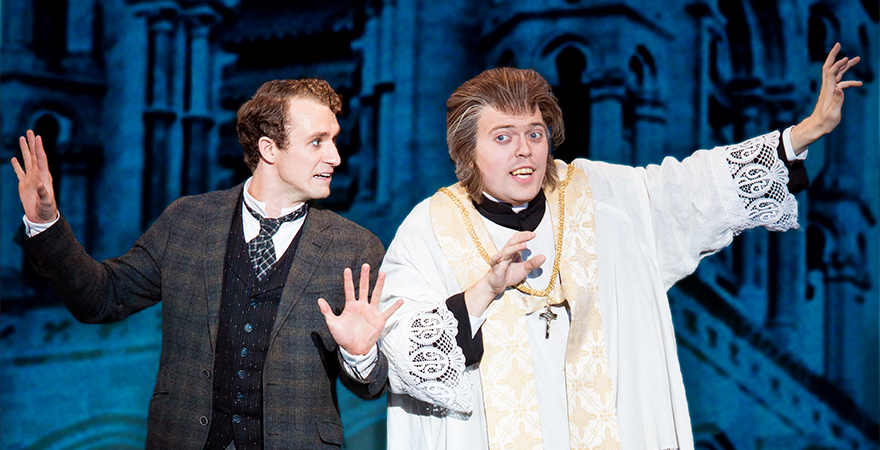 The broadway musical A Gentleman’s Guide to Love & Murder performed at State Theatre New Jersey this past weekend.The scenery, costumes, music, and acting were perfect ingredients for this outrageous comedy that won the Tony Award for best musical in 2014.

Englishman Monty Navarro is an heir of the D'Ysquith fortune, but in order to claim his wealth and be donned an earl he needs to kill off eight D’Ysquiths. He succeeds and becomes earl, but the show opens with him penning his memoirs in a jail cell as he awaits execution. His story is told in flashback.

Up until a visit from the stranger Marietta Shingle, Monty’s life was humdrum. His deceased mother Isobel D’Ysquith, a washerwoman, never revealed her royal lineage; she was exiled from her family when she eloped with Monty’s father, a Spanish musician. It’s never revealed why Marietta informs Monty of his lineage and encourages him to claim it. At some point, it’s revealed she’s a servant of Earl D’Ysquith’s for 39 years.

Monty’s in love with gold digger Sibella Hallward who will not marry him because he’s poor. She’s also being wooed by a rich man. This contributes to Monty’s drive to get to the helm. His adventure into the D’Ysquith family begins with a visit to Lord Asquith's son, Asquith D'Ysquith, Jr., who denies Isobel’s existence; he’s told to not contact the family again. He makes it into Highhurst Castle on visitor’s day and is shooed away as the Earl sings "I Don’t Understand the Poor." The distance between the uber rich and everyone else is an old story.

All of his relatives are played by one actor, James Taylor Odom who pulls the feat off well. Odom’s many roles include reverend, eugenicist, and philanthropist. His toughest kill is Lady Hyacinth who travels the world visiting faraway places—war torn Egypt, Leper riddled India, and cannibal infested Africa. She manages to survive despite Monty’s efforts, that is, until Monty axes the ship’s gangplank on one of her returns that she succumbs to the ocean. The song "Lady Hyacinth Abroad" illustrates her high adventures. Monty sets the stage for people to die by loading a gun, carving a hole in a frozen lake, and other devices, but it is Marietta Shingle who pulls off the biggest kill—the earl.

Along the way, he falls in love with his cousin Phoebe, so he has two women. She and Sibella both claim they killed the earl and since the court can’t convict two people, no one does time for the crime. Only Monty and his diary know the fate of the other relatives as he rampaged through their world in pursuit of his earldom. The show has the perfect blend of ingredients, making for a great musical. The talented actors and musicians took us on a raucous adventure which was an extraordinary feat!