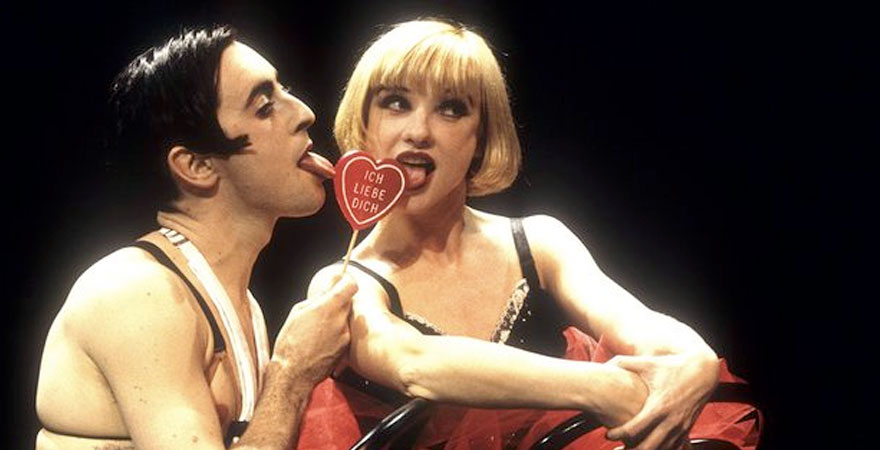 Cabaret was one of the most shocking musicals of it's day when it opened, turning the concept of a Broadway musical on it's head. Discussing anti-semitism and abortion on stage was basically unheard of and when Director Sam Mendes decided to revive the show in London in 1993 he decided to make the revival just as startling as the original if not more so, really digging into the seediness level.

So when Roundabout Theatre Company wanted to bring the production to Broadway, Mendesstuck to his artistic vision, insisting they find an "honest-to-God nightclub." After two years, they found Henry Miller's Theatre (now the Stephen Sondheim), which had previously been a nightclub, and before that, an X-rated movie house. Renamed the Kit Kat Klub, the rundown theater's gritty atmosphere was just the place for the in-your-face revival. Mendes and co-director and choreographer Rob Marshall’s interpretation lets you know you're in hell almost as soon as we arrive in a theater that has been done up to suggest a black boîte (with stage-side tables) at which the audience members are patrons.

The Cabaret revival opened on Broadway in 1998 (with some major changes from Marshall) and scooped up four Tony Awards® including Best Revival. But when a construction crane fell on the Kit Kat Klub, the show had to temporarily close—that is, until Mendes stood firm in his vision once again and kicked in the doors on the then-derelict Studio 54. "In addition to its rich and varied history, [Studio 54] happens to be the most atmospheric, theatrically viable space that I've seen in New York."

Although the atmosphere of the club isn’t as thickly convincing as, say, the club over at Sleep No More, it nonetheless achieves a certain amount of success in transporting the audience member to a very specific place. But it isn’t the Kit Kat Club from Bob Fosse’s 1972 seminal film adaptation; it’s a darker and more alienating place. The dancers are covered in bruises and their stockings are ripped, their heavy make up barely covering their misery. There’s something hypersexual in the air, but in a deeply unpleasant way. The choreography and the movements are focused on dehumanizing the body, making sex as much of a commodity as possible, and shoving that in the audience’s face.

"When we came to auditions [for the 2014 revival], it was fascinating," Mendes said of the Kit Kat Klub Boys and Girls, who are actor-musicians and also function as the show's orchestra. "You came to audition for this revival of a revival' [and] the standard of playing is astonishing… It's been wonderful to see how things have moved on, and now what's expected of performers on Broadway is not only do they [have to] sing and dance brilliantly, but they also have to be multi-instrumentalists on top of all that, and they have to act!"

"It is a living organism that changes night to night," say Mendes, making it the epitome of live theater.