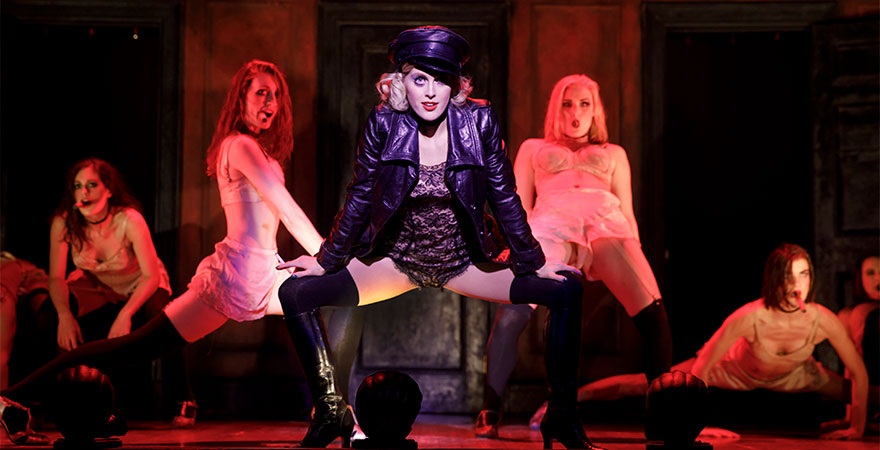 Broadway’s Cabaret performed at State Theatre New Jersey in mid-May. The stunning set design, costumes, music, singing, and acting together portray life in Berlin during the years 1929-1930. There are no troubles at the Kit Kat Klub, a haven for its dancers and their customers; however, swarming outside the club is political frenzy, and before long the Nazis are everywhere.

Clifford Bradshaw, a young man from Harrisburg, Pennsylvania arrives in Berlin. He plans on writing his first great novel in Berlin, but he never does; from the moment he arrives at the train station, he becomes caught up in the whirlwind of the city; it’s so alive. He meets Fritzie and the two become friends. Fritzie sets him up in Fraulein Schneider’s boarding house. The Emcee and the Kit Kat Klub sing "Willkommen" to the American.

The realism of the set design along with the orchestra sitting above the stage (instead of in the pit) turned the stage into a nightclub. The musicians were dressed in cabaret costumes adding a nice touch. Fraulein Schneider sang one of my favorite songs of the night, "So What." Before long we meet Sally Bowles from England; she’s a Kit Kat Klub dancer and loose like the other girls. She sings the tune "Don’t Tell Mama" which reveals her dysfunctional family. She eventually crosses paths with Clifford and a relationship blossoms.

Sally gets fired from the Kit Kat and becomes pregnant. Her relationship with Clifford becomes strained; Sally doesn’t want a child or a normal life as it would be boring compared to her wild life. Clifford wants tradition and thinks a baby will bring them closer; he’s naïve as their life views are totally different. She takes care of her pregnancy and eventually heads back to the Kit Kat Klub. Fraulein Schneider and Herr Shultz are in a relationship and things are heating up, they want to marry! But the Nazi regime is becoming more powerful and Herr Shultz is Jewish; he naïvely thinks because he is German and Jewish he will be okay.

With numbers like "Married," "Tomorrow Belongs to Me," and "The Money Song" rounding out the production, the last one is "Cabaret" sung defiantly by Sally as she is back where she belongs. She loves Clifford and doesn’t want to part ways with him, but she doesn’t have a choice, she desperately needs the club; it’s in her blood. The stage is somber and the Emcee opens his jacket and reveals a concentration camp prisoner uniform. The Nazis have arrived and even the place where there are no troubles isn’t safe. The musical winds down and Clifford is back at the train station getting ready to go home. He takes out a pen and paper and begins his novel.

Cabaret takes place during the years leading up to World War II and its atrocities. The actors beautifully portray the fear that dampened Europe at that time. They grasp to hold on to the pleasures of life: singing, dancing, and carousing at the Kit Kat Klub. Their defiance is admirable and despite their seedy way of life, they’re just human beings trying to survive in a world gone wrong. I thoroughly enjoyed this musical, prost! to the cast, musicians, producer, director, and all those who work tirelessly behind the scenes.