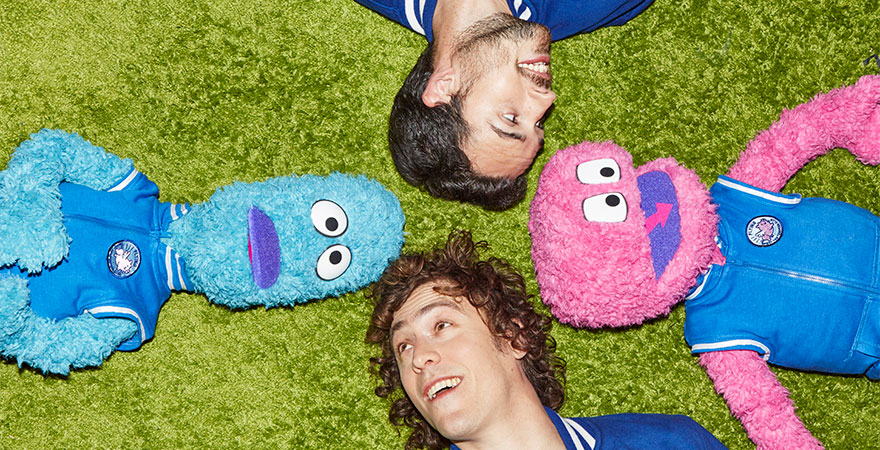 Our first Autism Friendly Milk & Cookies performances are coming up next month, June 30, with the fantastic duo The Pop Ups! The Pop Ups are a Grammy® nominated group that debuted in 2010 with five albums, a video series on YouTube, and a whole lot of puppets and cardboard sets under their belts.

This performance, as part of our Autism Friendly Relaxed Performances series, will feature lighting and sound levels that are modulated to reduce anxiety and stress, provide a separate break area with fidget toys and activities, and a social story with which to help prepare for the trip to our theater. Additional Autism Friendly Milk & Cookies performances are being scheduled for the fall and will be announced later this summer.

Jason Rabinowitz, a Broadway actor, and Jacob Stein, a University professor, met in Brooklyn and started collaborating together eight years ago, creating a sound that has been noted by NPR’s All Things Considered as something that “if MTV had a kids music channel in their video heyday…[The Pop Ups] would be in constant rotation”. Their 30-minute video “The Pop Ups Great Pretenders Club Special” is a mastery of what you can do with a few household objects and cardboard sets, teaching kids a combination of science, art, and music, while showcasing how they can make their own videos at home! Live shows with The Pop Ups aren’t just your regular concert either, it’s a full rock and roll puppet musical experience - there’s even a real robot that comes on stage to perform! Though we’ve never seen the robot and the full band in the same room at the same time…

And if you can’t get enough of The Pop Ups, the band just released their newest album, Giants of Science. It’s an electronically flavored pop piece featuring songs about time, space, and discovery, which you can find on Spotify. You can also check out our interview with the band on All Access Podcasts with State Theatre New Jersey, but don't forget to get your tickets for next month’s performances on Saturday, June 30 at 10am or 12pm.