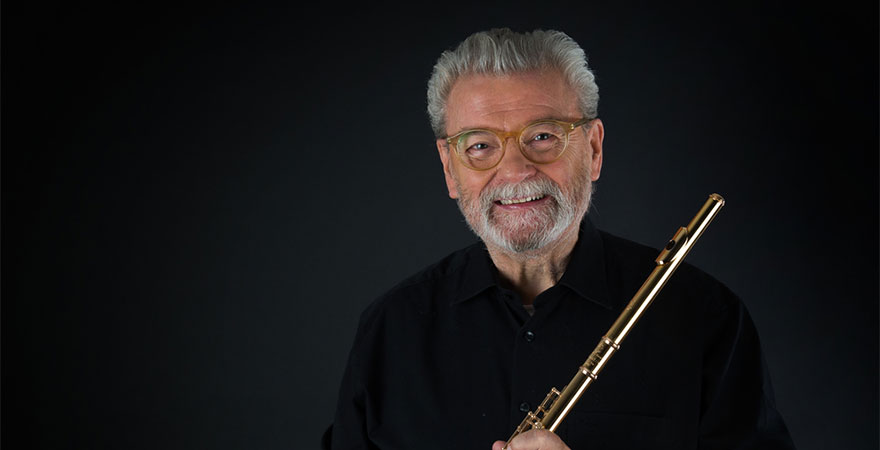 Sir James Galway’s illustrious career boasts over 30 million album sales worldwide, extensive touring, frequent television appearances, and passionate work in music education. The living legend will be at State Theatre New Jersey for a St. Patrick's Day concert on March 17, and we were able to snag some time out of his busy schedule for a quick phone interview in anticipation of him traveling to New Jersey.

So the flute wasn’t your choice of an instrument?
No, I tried to play violin. You know, it put Itzhak Perlman's heart to rest when I took up the flute.

Generally, people think of the flute as being part of an orchestra, not necessarily a featured instrument.  What have you had to do in order to push limits and become this entertainer that could cross musical boundaries all while playing the flute?
Well, we did a lot of things that flute players normally didn’t do. People like Rampal and those sort of flute players were very straightforward and they only played Mozart. Jean Pierre Rampal made a big breakthrough with a jazz piece, "Suite for Flute and Jazz Piano" but he wasn't really playing jazz, the piano played the jazz and he played straight. I got involved in a lot of things like TV shows, I was a guest on a lot of them, and it seemed to be going every well, so I got asked on more and more and then got my own TV show. I invited Jessye Norman and people like that to play on it, and it was very successful.

You Tube Video Placeholder
You have sold over 30 million albums over the span of your career. How have you personally changed from selling your first album to your millionth one? Has your success changed how you look at your craft?
If you listen to all these records I made, they are different and better than the rest of the bunch, and you can hear that. It required an awful lot of hard work to keep up with that standard. So when you think about changing, I didn’t change for a luxurious life, I changed for a life of hard work.

You are, in fact, Sir James Galway; what were you knighted for? What was that experience like overall?
I was knighted for service to music by the Queen. The Queen is so gracious in these occasions, and she knows everyone by name which is amazing.

So was that an individual ceremony or was it done with other people?
It was done with 103 people, I think 3 were knights and the rest were sort of other honors.

You are the subject of a BBC Documentary Being James Galway - what are the differences for you in playing before a live audience versus playing in front of a camera?
There is no difference because you’re doing your thing and it doesn’t matter who is there, you just have to do it. Playing for an audience is fine, sometimes you catch people reading a book or reading the program. In front of the camera you don’t have these distractions.

You and your wife run The Galway Flute Academy, so you are able to share your wisdom and experience with the musicians of tomorrow.  What drove you to start this academy and to teach in addition to performing?
Well we did it 30 years ago, and we only did it because everyone else was doing it. The only difference between my classes and the rest was that I had over 100 people attending. Whereas my colleagues had only about 25, and you can bet that 15 of them are their own students.

You have played for some pretty incredible people in your lifetime, including Queen Elizabeth II, Pope John Paul II, President William J. Clinton, President George W. Bush, President George H.W. Bush. Is there anyone that you wish you could perform with or for that you haven't had the opportunity to yet?
Yes. Eric Clapton and Elton John, and I wouldn’t mind playing with the Vienna Philharmonic but I don't think that's going to happen. They have very good flute players, and their solo flute player is just great.

So what is it about Elton John and Eric Clapton that makes you want to perform with them?
I like to spread my wings a bit and do something different, and I’d like to play something improvised, a little bit jazzy.

So you have been playing the flute classically for a number of years, how have you seen the music industry shift over the decades?
Oh yes, completely. It’s really amazing. When I was a kid we had 78s, then it became long playing records, then it became stereo, then CDs, and now we’ve got the Internet. The whole business of selling music has become completely different, people expect everything for free. It is difficult when we make videos now, because people want to take them for free.

Do you believe that the classical music industry is still thriving today in modern society? How do you think it is doing compared to how it was doing a few decades ago?
Well I think it depends where you go. For example, I just did a concert In Italy that was completely sold out. All the concerts that I am involved in are sold out, but I can’t say for other people how it works for symphony orchestras. I think it has become very difficult to symphony orchestras to attract an audience if they are playing music that the audience doesn’t want to hear. Also, they aren’t going to educate the audience because the audience doesn’t want to be educated, they want to be entertained.

Do you have a personal preference about performing individually versus with a small group of musicians, versus with a big orchestra backing you up?
Oh no, I like everything, because they’re all different. With the big orchestra you play things like "Linen and Lace," which is a new flute concerto by Bill Whelan, it’s a river dance. When you play with a smaller group you play a Mozart quartet or Beethoven serenade, things like that.

Fantastic, thank so much for taking the time to speak to me today. We look forward to seeing you in the New Year! 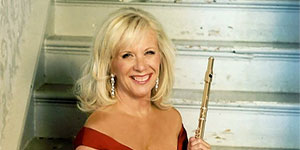