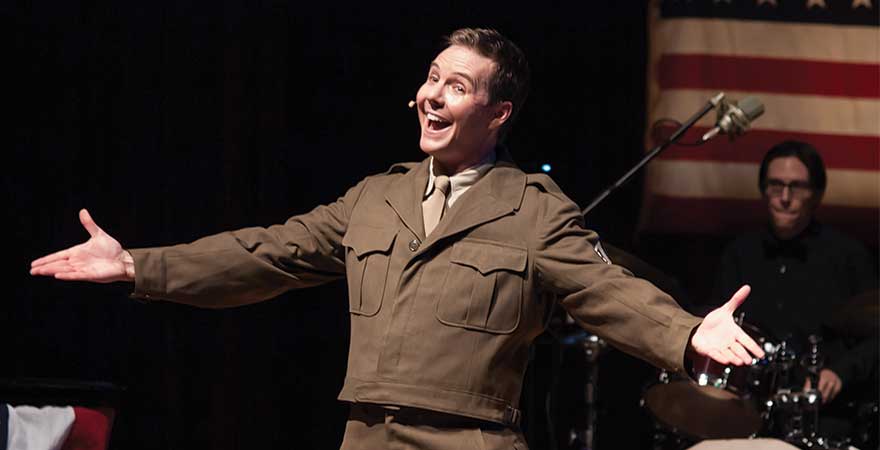 The All Hands on Deck! Show is an all-singing, all-dancing, all-American 1942 Roadshow & Radio Broadcast reproduction and it's coming to State Theatre New Jersey on November 11! Creator/Producer/Performer Jody Madaras joins us to discuss what people can expect from the show and what draws him to that era of style and performance.

Bert: Welcome Back to all access with State Theatre New Jersey, coming up a little bit later on in the program this week some terrific upcoming events at State Theatre New Jersey so you want to make sure you  got the dates and the times, and of course you can get all the information at STNJ.org. Kel how about a terrific show that’s going to be happening on the afternoon of Veterans Day, on Sunday November 11th at 3pm. Now for somebody that does what we do, a weekly radio show, think of a radio show done live on stage, is that the kind of show that’s going to be happening?

Kelly: Yes it is! I’d hate to think of us on the stage together Bert, for a live radio show, but this show is the show to see, All Hand On Deck. It is an all singing all dancing all American 1942 road show, and radio broadcast reproduction filled with songs, dances, and of course laughs that America has loved for 70 years. With us today is Jody Madaras from All Hands On Deck! Welcome Jody!

Jody: Well happy day to us all, it’s so nice to be with you!

Bert: That is an old time radio voice right there, it’s kind of taking us back to the golden age of this medium Jody. So the All Hands On Deck show for somebody who’s a fan of classic radio, this is gonna be a great show to enjoy right?

Jody: absolutely, the All Hands On Deck! Show as Kelly mentioned is an authentic road show and radio broadcast from 1942 and I am the creator of the show, I also star in the show, and I produced this show, and I have to tell you that the All Hands On Deck! Show, boasts 42 of the greatest American songs ever written. And its just a treat to be on stage with it, and I think what I love most of all about our show is that its reminding Americans how it feels to be united. It seems like today more than ever we kinda all need that don’t we?

Kelly: That is very true Jody, when you were putting this show together what was it that really kinda sparked your creativity and is it something that you kind of always loved, did you always love looking back at those road shows, radio broadcasts and thought you could make a show out of it? Is it that you like to sing these particular songs? What was really the first move towards creating this show?

Jody: Absolutely, well I’ve lived in New York and have been on Broadway and did a lot of reginal theater and cruise ships and some stints on CBS television for almost 27 years but in 2007 I decided it was time to write my own show. My friends were writing their own shows, like Avenue Q and things like this, and I thought “why don’t I write a show, and what ground do I stand on?” And I grew up with the songs of the 40s and 50s and my grandparents, my grandma and grandpa Madaras and grandma and grandpa Walston, would sing these and hum these songs they even had their record albums, so I grew up with this material. But in 2007 I thought, I want to write a show that showcases a time when our country was fully united, and so I started doing a bunch of research and I found that 1942 is one of the great years for America to be fully united. Everyone had something they could contribute to the country, everyone did. And in 1942 I came across this little band of Hollywood actors, they’re known as the Hollywood Victory Caravan, and these famous film stars; Clark Gabel, Bob Hope, Jack Benny, Lucile Ball, and Lina Horn and on and on and on, and what they did was these stars got together in early 1942 and went out all across the United States selling war bonds or savings bonds in order to help raise money for the war efforts. So what they did was, they would go to a town and they would put on a road show and the local citizenry could purchase a war bond and come in and see the show. This was a big deal in 1942, these Hollywood stars went to over 300 cities and so I realized no one ever thanked them, they never got a postage stamp in their honor. They’re largely a forgotten group, and I thought wouldn’t it be interesting if I used their story as part of my story, so the All Hands On Deck! Show is loosely based on the Hollywood Victory Caravan, and it really inspired me, those Hollywood stars that would go around and do these roadshows and so my show is loosely based on what they did.

Bert: This feels so much Jody like a trip back to the golden age not only in Hollywood but the golden age of radio and like you said just the time in America when things were a little bit simpler you know? We had each other’s back and you knew who your neighbors were and just such a straight forward kind of time in our Americas history, and for anybody that would like to see how it used to be in the United States and maybe someday how it will be again, the All Hands On Deck! Show is absolutely for you! It’ll be on Sunday November 11th at 3pm, tickets are on sale now at stnj.org and start at just $15. So grab some friends and really just enjoy what’s a terrific sort of unique show that I don’t think you’re gonna see before and maybe never see again, I like a show like this. The authenticity of the radio broadcast part Jody of course that’s what I’m fascinated with, and sort of just recreating the golden age of this medium is not an easy thing to do, how much work goes into creating a genuine old time radio show?

Jody: Well its really wonderful because what we were able to do was, I did a lot of research at  Lincoln Center and other places in New York, and I found out how they kinda ran their makeshift radio broadcasts. In our show, we have the applause signs, you know that blink and teach the audience kind of when to applaud and how to applaud. We cue them, so our audience becomes the studio audience its very interactive, and just great fun, a lot of jokes and things that the audience can really grab hold of. And of course our set, you’ll see these old fashioned microphones known as the "Fat Boy" microphone, they’re silver kind of roundish microphones. And you know that’s really all they had and they had their scripts and they had their talent, and some great writers too I might add, and so our act is this radio broadcast and I would also, for the folks who are listening, say that the one thing to remember about 1942 is they had things called live musicians, orchestras, bands and that’s what I bring with the All Hands On Deck! Show. We have a nine piece live orchestra and all of our orchestrations are authentic, so you’re really gonna get the whole picture when you hear this sound of this big band and these characters, its just a great moment.

Kelly: Yeah, and you know Jody this show is perfect for us cause we are a 1921 historic venue and I am pretty sure that what you were talking about, like the Lucile Ball and folks going around and performing these acts, I’m pretty sure we were one of those stops so this is very exciting! I mean you talk about 42 of the greatest American songs ever written, “Im in the Mood for Love,” “I’ll Never Smile Again,” “America the Beautiful,” “Deep in the Heart of Texas,” which is awesome…

Jody: …“Chattanooga Choo Choo” is one of my favorites.

Kelly: Right, without giving too much away, walk us through a little bit of the show and what people can expect.

Jody: Right, so really when you come into our show, we appear, the certain comes up, you see sort of a makeshift set with the orchestra and the four characters; Ted Crosley, Betty Blake, Daisy Maxwell, John Hanley, these are the four characters. I happen to play Ted Crosley, the host of the show. We come out onto the stage and we’ll talk a little bit about being in New Jersey, and we may even talk about being in New Brunswick a little bit in the town. It’s great fun, and the first act is full of songs and a lot of tap dancing, Broadway style tap dancing. But it’s a true war bond drive, we talk about the nation and how can we help each other, how can we contribute to our nation. Then In Act Two we decide we’re going to do a radio broadcast for you and we turn the stage slightly into a radio show, real broadcast where we teach the audience how to applaud. Act Two goes on and it kind of leads us through the feelings of supporting a nation. When we support our country there’s highs and lows, there’s good times and tough times, and all of our songs in act two kind of reflect that. It’s a little bit of a roller-coaster emotional ride, and  I cant tell you exactly how the show ends cause that would give it away, but I would say to all the veterans, all the veterans and their spouses and their families, they will love the end of this show and our active duty service men and women in the area, I invite them to come see the All Hands On Deck! Show. It’s for them, it’s about them, and also for seniors in all of New Jersey the great garden state, if you have an uncle or an aunt or a grandfather who was perhaps in the service, either the Korean war, or World War Two, even obviously Vietnam, get them to our show. It’s a real shot in the arm for every American.

Bert: Just a living history lesson is what it sounds like, not only for entertainment but for the history of our great country, Jody and we thank you so much for bringing this show to town. Now where can someone go online for more details about the All Hands On Deck! Show?

Jody: I know you can go right to the New Jersey State Theatre website, I’m sure that would have all the info.

Bert: it sure would, STNJ.org, and again don’t forget the date of the show is Veterans Day, Sunday November 11th, 3pm, and get those tickets at stnj.org. Jody Madaras it was an honor to speak with you today and thank you for keeping this entertainment alive and that we can’t wait to see you at State Theatre very soon.

Jody: Great, we're looking forward to being there, we can’t wait! 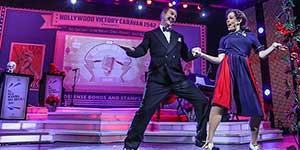