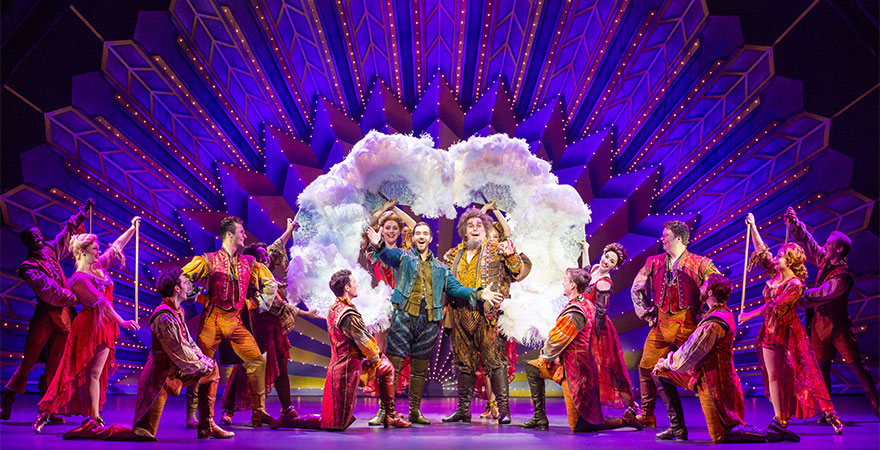 As Nick Bottom in Something Rotten! tries to come up with a play that involves singing, dancing, and acting–a musical–he was making clever remarks on highly praised musicals centuries too early! At the same time, he breaks into song as he’s complaining that no one would ever accept an actor breaking into song in a play. Ah, the irony. Something Rotten! is brimming with countless references from some of the most beloved modern musicals throughout history, from Les Mis to RENT. Jazz hands out! Below is a list of just some of our favorites from the show-stopping number “A Musical.”

“Some musicals have no talking at all”:Several musicals are more akin to operas, possessing no spoken dialogue, including Les Misérables, Jesus Christ Superstar, RENT, and several others.


“I believe it’s called ‘Miser-ahh-bluh’”: This is directly referring to Les Misérables, with music by Claude-Michel Schönberg, original French lyrics by Alain Boubil and Jean-Marc Natel and an English libretto by Herbert Kretzmer.


“Feel that fascinating rhythm move into your feet”: These lyrics are from George and Ira Gershwin’s “Fascinating Rhythm,” which was first included in the Broadway musical Lady Be Good in 1924 with Fred and Adele Astaire.


“It’s a musical, a Seussical?”: Seussical was a musical that debuted on Broadway in 2000 and was based on the books of Dr. Seuss. Stephen Flaherty independently composed the music and co-wrote the book with Lynn Ahrens, who also wrote the lyrics.


Sailor Hats: During “A Musical,” Nostradamus and the chorus men don sailor hats, which harkens to several nautical–themed musicals, including South Pacific, Anything Goes, On the Town, and Dames at Sea.


“All That Jazz” Number: This number comes from the John Kander and Fred Ebb musical Chicago, featuring the iconic Broadway choreography of Bob Fosse.


“525,600 Minutes” Excerpt: This moment comes from the song “Seasons of Love” from Jonathan Larson’s RENT, which won the Tony Award® for Best Musical in 1996.


Wash Buckets: The ensemble brings on cleaning buckets and emulates the iconic staging of the song “It’s the Hard Knock Life” from Charles Strouse and Martin Charnin’s Annie.


“When dancers kick in unison in one big wonderful line”: The lyrics refer to the tradition of a chorus or ensemble dancing in a line in synchronized fashion. This can be seen with the world–famous Radio City Music Hall’s Rockettes and the musical A Chorus Line.


A Chorus Line: At the end of the song “A Musical,” the entire company crosses to one line downstage with headshots (or rather head… sketches) in front of their faces. This is a replication of the iconic staging from the musical A Chorus Line.