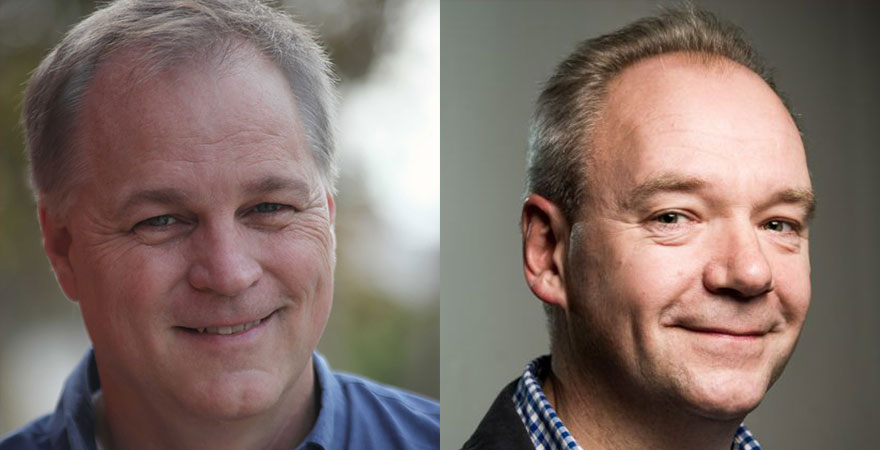 Writers Karey Kirkpatrick and John O’Farrell are the dynamic duo behind the smash hit musical comedy Something Rotten!. We got an inside look into how they went from Broadway amateurs to Tony®-nominated writers.

Can you talk about the initial idea/concept?

Karey Kirkpatrick: I think it was more of a series of conversations which happened over a bunch of meetings and Christmas dinners, since Wayne [Kirkpatrick, Karey’s brother] and I don’t live in the same town.

We were both big history buffs and had the thought “Wouldn’t it be funny if Shakespeare’s London were a lot like what Broadway was like in the ‘30s?” To create a musical in which writers during the renaissance period had agents, and the Tin Pan Alley scene. The early jokes were that the agents were William and Morris and the law firm was Rosen, Crantz & Guildenstern. So that was an early idea, then at one point, we asked ourselves… what must it have been like to be writing in the shadow of William Shakespeare after Romeo and Juliet just opened?

Early on, we came up with a plot which had two writers who weren’t brothers, just partners, trying to beat Shakespeare at his own game. They end up going to a soothsayer [a fortuneteller] to try to find out what the next “big thing” in theater is, and the soothsayer says “Musicals.” So Something Rotten! tells the story of the two authors that wrote the first musical. The show ends up becoming a mashup of both musicals and Shakespeare plays.

That all happened around 1995-96, and while that was going on my friend Kevin McCollum had just produced this little musical called RENT.  Wayne and I were there and saw it and said to Kevin, “We have an idea for a musical,” and he said, “I’d love to hear it.”  That went on until about 2010. Finally we worked up the courage and called Kevin and said, “What do you need?” He responded by saying that Avenue Q was three songs and an idea. We said, “Well, we have that.” Kevin came to my house, we pitched him five songs and the general idea. And he said, “I think you’ve got something here.”

Shortly after that, John [O’Farrell] came on board. John and I had met around ’97 on another project.

John O’Farrell—We were in Los Angeles and I think it was there that Karey pitched the idea of this musical. I said, “I don’t think Shakespeare would do it that way, he might do this.” So they thought, “He might be useful.”

K – I knew we all had the same sensibility and sense of humor, so it seemed like a perfect fit. Any time we had to write something sonnet-like or in iambic pentameter, John just had that under his skin because he was raised in it more.

Theater is a risky business, so why did you all say, what the heck, we’ll write a Broadway show and open directly on Broadway?

K – I’ve wanted to do that since I was 15. I was reared in musical theater; I wanted to be an actor but I wasn’t good enough, honestly.

Luckily, I knew Kevin. Kevin and I worked at Disney World together, he sang on my Disney animation demos. So knowing someone like that, who went off and became one of the most successful producers on Broadway was certainly a leg up. So because of that connection, it didn’t seem that far-fetched to me. Kevin is also one of the few producers who will roll the dice on people who have never had a show on Broadway before.

J – When we pitched it to Kevin, he said, “I know someone who might be really good for this–Casey Nicholaw who did The Book of Mormon?” Casey came in the next day and said, “yeah, let’s do it.”

K – Casey has a really great sense of what should be happening when in a musical. The structure and feel of a musical is just in his bones.

You mentioned that one of the great things about hiring John for the project was that he had all this knowledge of Shakespeare. One of the reasons this musical is so brilliant is because of all of these references to and quotations from Shakespeare and a million other shows. Did you both have to do research, or was that just knowledge that you had?

J – Wayne and Karey have all that knowledge, we’d be sitting around trying to write a song or a scene and they’d say, “You know that song in Sunday in the Park with George?” And I’d say, “No.” And I’d say, “You know that thing in Taming of the Shrew?” And they’d say, “No.” So we had separate areas of knowledge and expertise. What that also did was if they hummed a tune and I’d recognize it, they’d say, “Oh, that’s from Carousel, the audience will enjoy that.” I was the person in from Times Square who knew the bare minimum as far as the musical references were concerned, and they were the person in from Times Square as far as the Shakespeare references were concerned.

K – What we tried to do was make sure that our references were kind of “best of.” We referenced Hamlet a fair amount.

J – Merchant of Venice and Romeo and Juliet are referenced a lot as well. When we wrote the line, “The prince’s uncle has been killed, and his name is Scar,” The Lion King IS Hamlet and everyone knows The Lion King.

Your Shakespeare is a fascinating character. He’s an admirable, charismatic, and talented rock star. But he is also a thief of intellectual property. How do you both look at the real Shakespeare, and how did that feed into your version of Shakespeare?

K –We used to pitch it and say, these two writers are struggling in the shadow of Shakespeare who’s like a rock star. We were like, Shakespeare coming off of Romeo and Juliet must have been like the Elvis of his day.  So we thought it would be funny if Shakespeare did his sonnets, and it’s like a Beatles’ concert, that there would be this call and response. He’s doing his greatest hits and all these people are sharing that. We always thought he’d be a cross between Austin Powers and Freddie Mercury.

J – But Shakespeare going around taking lines off Nigel, asking can I read your folio, saying Portia, oh that’s a good name. I think that’s a fair observation about any writer. We all Hoover up each other’s witticisms or characters and regurgitate them. I’m sure Shakespeare was doing that all the time. He wrote 30-something plays in 15 or 20 years, there’s no way he could have done that without taking from around him.

Bea is a very interesting character. She’s a little bit Rosalind and Portia and Viola and Julia. She’s a can-do feminist and a heroine. What were you trying to say with that character?

K – With Bea, we knew we wanted to borrow from the Shakespeare trope that women often go in disguise. So for us, it was important to represent that through her wanting to be an actor, Bea would disguise herself and try to join the acting troupe.

Do you feel you’ve written three shows in one? The first is the overall show which everybody can enjoy and savor and get the references to. Another is the show that speaks to people who love and know a lot about Shakespeare. The last show is for musical theater fans who are going to laugh and laugh at all the various references they hear.

J – If it works for people who don’t know musicals or Shakespeare, then I’m happy.  It’s about show business and the various aspects of putting on a show. Just doing that in Tudor times gives it an extra spin. The show does work on many levels, but the main level it works on, I hope, is that it’s just a great fun night out.

K – I’m confident that the show is going to have the same level of entertainment value on the road that it does in New York; we’re going to make sure that it does. I’m excited! The chance to get it out and show it to more people is going to be with us the rest of our lives. I look forward to the first high school it ends up in.

K – I promise people it will be a fun night out at the theater. You will have a good time.

J – There’s just one great song after another and in between, the jokes are funny. What more do you want?