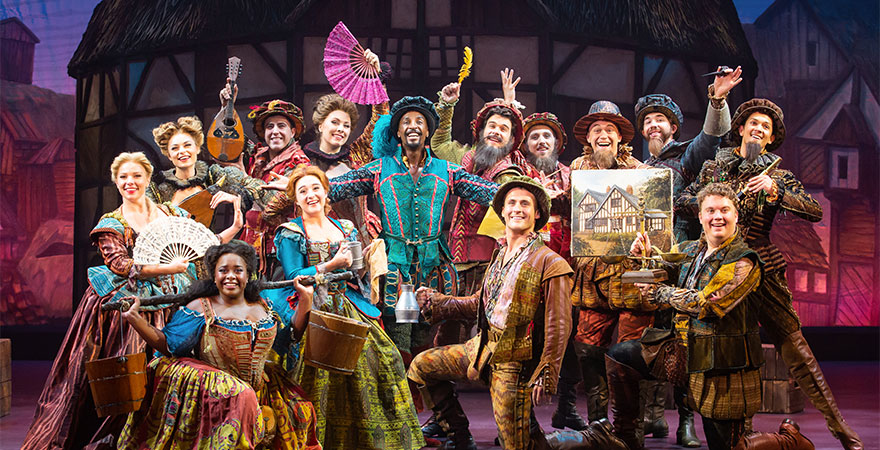 Most Broadway newcomers don’t get their first show produced by Tony Award®-winner Kevin McCollum, and they don’t typically land Tony Award®-winner Casey Nicholaw as their director-choreographer. But brothers Karey and Wayne Kirkpatrick and British comedy writer John O’Farrell, the creators of the Tony Award®-nominated Something Rotten!, aren’t like most Broadway first-timers.

Growing up in Louisiana, the Kirkpatrick brothers fell in love with musical theater, appearing in high school shows and going to what is now the Baton Rouge River Center to see touring productions of Broadway hits. In 1983, Karey Kirkpatrick saw his first show on Broadway, My One and Only, starring Tommy Tune and Twiggy, at the St. James Theatre—the theater that was home to Something Rotten!.

Careers took the brothers and their Something Rotten! collaborator O’Farrell in different creative directions— Karey to success as a screenwriter, songwriter, and director, with credits including The Rescuers Down Under, James and the Giant Peach, and Chicken Run; Wayne to acclaim as a Grammy Award®-winning songwriter (Eric Clapton’s Song of the Year “Change the World” and Garth Brooks’ “Wrapped Up in You” are his); O’Farrell to multifaceted success in the UK as a comic novelist, columnist, and TV/film writer.

The seeds of Something Rotten! were sewn in the mid-1990s when the Kirkpatricks started kicking ideas around.

“We were big history buffs. It started with, ‘Wouldn’t it be funny if Shakespeare’s London were a lot like what Broadway was in the 1930s?’” Karey says. “Then it was, ‘What would it be like to be writing plays in the shadow of William Shakespeare, after Romeo and Juliet just opened?’”

“We thought of two writers,” Wayne says. “What if one went to a soothsayer? Then somewhere along the way it was, ‘What if the two writers were brothers? What if the soothsayer’s name was Nostradamus, but he wasn’t the Nostradamus? What if he was a senile, bad soothsayer, his nephew?’ Eventually it was, ‘If we’re going to do this, we should really get serious about it.’”

The brothers buckled down, and in 2010, Karey reached out to his friend Kevin McCollum, producer of original hits like Rent and Avenue Q. The two had previously met when they were both street performers in Disney World.

“We called Kevin and said, ‘What do you need?’ He said that Avenue Q was three songs and an idea,” Karey says. “He came to my house and we pitched him five songs and the idea. He said, ‘I think you’ve got something here.’”

Karey brought in O’Farrell, whom he’d met on Chicken Run, to help craft the book. The brothers crafted the music and lyrics, eventually writing more than 50 songs. What they had, after plenty of revisions and a multi-year developmental process, is a buoyant musical set in Shakespeare’s day that imagines the creation of the very first musical.

Something Rotten! centers around Nick and Nigel Bottom (the last name comes from A Midsummer Night’s Dream), brothers desperate for a hit in Elizabethan London, where William Shakespeare is a rock star-like god of the stage.

Nick’s wife Bea, a can-do gal in the style of Shakespearean heroines who cross-dress to get things done, tries to help. Nigel falls for a pretty Puritan named Portia, whose daddy strongly disapproves. Flawed soothsayer, Thomas Nostradamus, nephew of the Nostradamus, looks into the future and tells Nick that theater’s next big thing will be— tahdah! — “musicals,” where people sing, dance, and act all at the same time!

Something Rotten! is laced throughout with humor for Shakespeare aficionados and musical theater geeks.

But as O’Farrell observes, “If it works as a musical for people who don’t know musicals or Shakespeare, then I’m happy. It’s about show business and putting on a show. The show works on many levels, but the main level it works on, I hope, is that it’s just a great fun night out.”

“I think it doesn’t matter how much you know,” says director-choreographer Nicholaw, whose current Broadway shows are Aladdin, The Book of Mormon, and Mean Girls. “My nieces and nephews say it’s their favorite show that I’ve done, and they don’t understand any of the references.”

For the no-longer-green creative team, Something Rotten! has been a challenge, an education, a joy, and an experience they still savor as the touring production plays cities all over the United States.

“This was by far the hardest thing I’ve ever done, but [it was] so rewarding to sit in a theater and watch all these amazing contributions from people who took it beyond our idea to create this magical, happy experience,” Wayne says.

A success since opening on Broadway in April 2015, it is clear that Something Rotten! is the hilarious hit that became a Broadway staple. This Tony®-nominated Broadway musical will be at State Theatre New Jersey for 3 performances only from November 2-3.