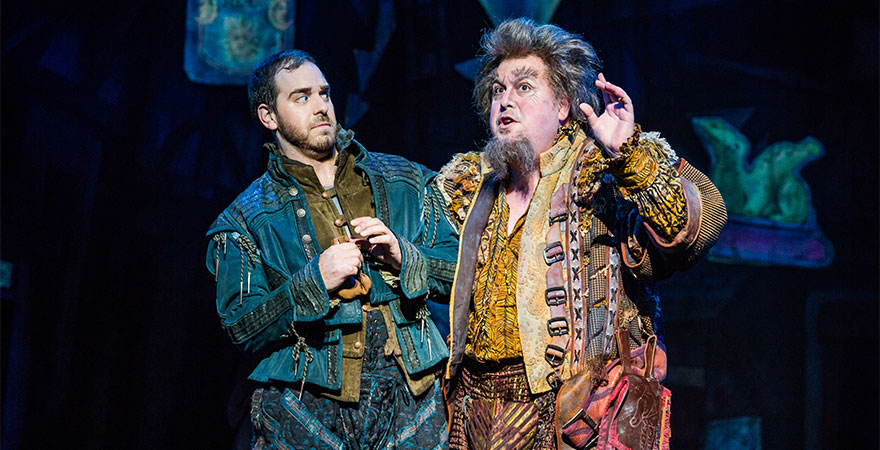 The smash hit musical comedy, Something Rotten!, tells the story of Nick and Nigel Bottom, two brothers who are desperate to write a hit play. Steve Bebout, who himself has been the associate director of hit plays such as The Book of Mormon, Sister Act, and The Addams Family, chimes in about his work on Something Rotten!.

Can you take me back to when you started working on the big show-stopping number “A Musical?”

I work with Casey Nicholaw (director & choreographer), and he has an associate choreographer John MacInnis as well, and Glen Kelly, who is the dance arranger. The authors had written this song, and it had a verse, and a chorus, and a bridge; but when you need to expand upon that to make it larger—something that can have a dance break—you need to have some more music. Sometimes it’s just an extension of what’s already there, and sometimes it’s brand-spanking new.

And Glen Kelly is the best, he’s amazing. So he and Casey sat and talked through the number, and as Casey’s imagination got going, he’d say something like, “And then we go into a section that feels like 'Big Spender'," and Glen sits at the piano and figures out a way to weave that bit of melody into the dance arrangement.

So the four of us were in the room together for a little while, then Casey brings in a group of dancers. So it was Casey playing Nostradamus, me playing Nick, the associate choreographer being the lead dancer, then six or seven other dancers. We just started doing the number. He starts discovering steps and the format of everything, and he starts choreographing it, and when it’s all said and done we could do the whole number for you.  It certainly doesn’t have the impact of 18 dancers behind you, but it gives you the shape of the number, and you can extrapolate from that what it’s going to look like as a whole number.

So by the time we went into the room with the whole cast for rehearsal, we had a good idea of what the number was going to be, because we had done it in pre-production.

And the number is just fantastic, Casey at his best. Nobody’s got a feel for playing with the audience like that like Casey does.  It’s really remarkable.

What would you say to audiences who think, “Oh, a show about Shakespeare,” or “Oh, I need to know a lot about musical theater?”

Most people know a little bit more about both of those things than they think they do. It’s so part of our collective consciousness in culture. Everyone had to come in contact with Hamlet at some point in their lives if they went to high school. The other piece is if you think, “Ugh, I really don’t like Shakespeare,” the second song in our show is, “God, I Hate Shakespeare.” So we’re the perfect place for you.  We take the piss out of Shakespeare properly!

That’s part of what’s enjoyable. Watching these characters who are in Renaissance London speak in our vernacular. You lose track of it almost immediately. It does so much to invite the audience in. We don’t speak with accents. We talk like our audience talks. That goes a long way toward breaking down that barrier as far as Shakespeare goes. We give you Shakespeare and his world in a skewed way that feels very familiar, which is a great way to get to know him a little bit better.

And for people who know a lot about theater, there are a lot of great reference points that not everyone will get; but it isn’t integral to your enjoyment of the show. If you know Casey Nicholaw, this show is just an expression of who he is: joy, and, fun, and heart. It doesn’t ever take itself too seriously. It wears its heart on its sleeve, and is full of joy, and laughter, and energy.

Karey, Wayne, and John O’Farrell are very accomplished, but are newbies to musical theater/Broadway. What was it like working with them?

I had the perfect view because I got to watch them all do their thing. The great thing about what they did—this may have been their first time—but they know a lot about musical theater. They’re students of it, their knowledge is deep. It was great to have Wayne there—who records pop and country music—who can give an edge and style to the show that makes it feel unique and hip. The best part was experiencing the process through them. They were like the kids on Christmas, with huge smiles on their faces and savoring every moment.

This show is not for any droning, base-court apple-john. The State welcomes you on November 2-3 to Something Rotten!, the most whimsical Shakespeare-inspired production you will ever experience!