The King and I—A Trip to an Exotic Land 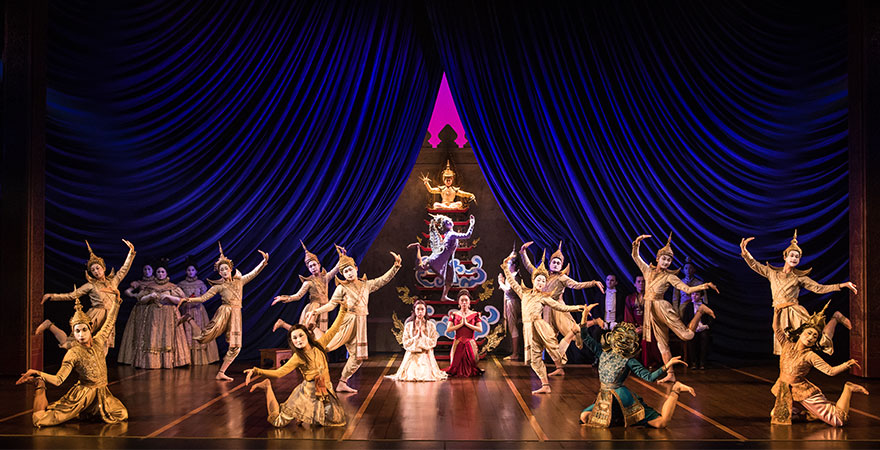 Rodgers & Hammerstein’s Broadway show The King and I performed at State Theatre New Jersey this past weekend. The stunning costumes and scenery, along with the musical score, instantly transported us to Siam (modern day Thailand) along with British teacher Anna Leoneans and her son Louis. The bustle of the city with its frantic pace gives Anna the jitters and the musical begins with “I Whistle a Happy Tune” because whistling alleviates her fear.

Her husband Tom was an officer in the armed forces. She’s now a widow and with her son in tow, they are whisked off to the King’s palace where she will be a governess to his many children from his many wives. There are lifestyle differences between the East and the West but the European dominance in the world is influencing Siam. In school, the children acknowledge England’s King Edward and Queen Victoria. The tiny country is caught up in the colonial dominance sweeping the world and the king is convinced the Europeans are trying to prove he’s a barbarian so they can take over his country.

He wants his children to learn the western way of life and to be worldly. Anna wants her own apartment separate from the palace but his royal highness insists she and her son live in his home. There is tension between the teacher and king. Exotic gold costumes and beautiful scenery graced the stage. The towering golden Buddha created a peaceful atmosphere. It’s obvious a troupe of talented people worked in front of and behind the curtain. The singing was stellar and included “The Schoolroom,” “The Royal Bangkok Academy,” and “Getting to Know You,” among others.

The play is based on the novel Anna and the King of Siam by Margaret Landon, which is from the memoirs of Anna Leonowens, the governess to the children of King Mongkut of Siam in the early 1860s. Their relationship is tense and he mocks her expression etcetera throughout the show. He demands no one’s head be higher than his and he teaches Anna this in a playful way as he lowers himself to the stage and she follows until they are lying on the ground. Their relationship eventually turns warm and they become fond of each other.

Throughout the show the king refers to President Abraham Lincoln and in one scene when Anna is talking about the king’s many wives, the king asks what the president does about his wives to which Anna replies he only has one. He wants to help the president with the war in America; he wants to send him elephants and guns. The dialogue was funny and the king endearing. He’s an innocent dressed in king’s clothes. Sadness shrouds the palace as the king is on his deathbed and it’s then that their love and fondness for each other is evident.

The exotic atmosphere, stunning costumes, beautiful songs, and the playful relationship between the king and the teacher made this musical a delightful treat.