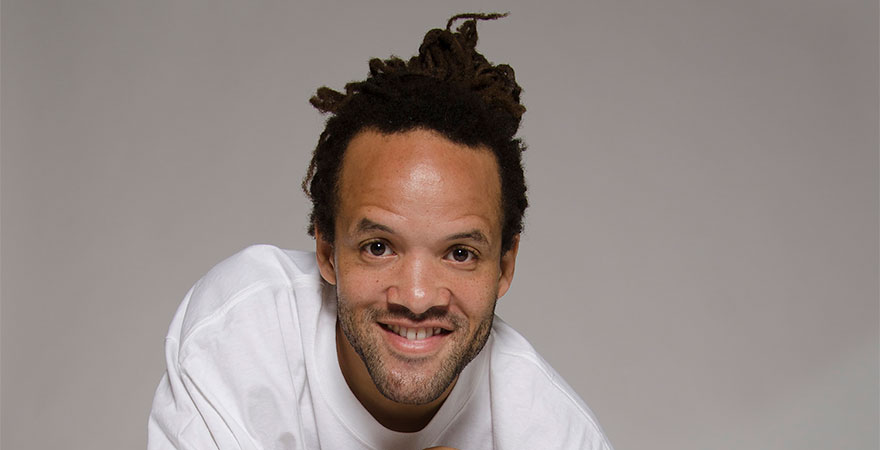 See the thrilling new program All FuNKD’ Up featuring tap superstar Savion Glover on February 7! Savion himself joins us to chat about how this new concert came into existence and how the music itself is so important in his performances.

Bert: We are back on All Access with State Theatre New Jersey, and Kell, a guy of this iconic stature, if you will, doesn’t come along every day. We are so excited that he is going to be coming to the State Theatre Stage on Thursday February 7th. Can you tell my palms are getting a little nervous here?

Bert: We’ve been doing this for years, and I don’t get nervous often. Why am I nervous now?

Bert: Will you introduce out guest?

Kelly: Yes! Probably because he’s the greatest tap dancer that has ever lived, Bert?

Kelly: We are talking about Mr. Savion Glover. Welcome, Savion!

Bert: This is so cool.

Kelly: So cool. So, Savion, thank you for being on the show. We are looking forward to seeing you on February 7th with your All FuNKD’ Up show. Tell us all about it.

Savion: Well, it’s All FuNKD’ Up. Basically, you know, for my life, for my journey, my career, my tribute, my dedication to the dance, and to the men and women responsible for what I am. It’s my proud privilege just to continue to recognize them through these kind of dance performances. Tap Dance presented as a concert. This particular presentation is dealing with All Funk’d Up. It’s about the music this time. I’m using – I choose to use music of like, you know, we can go from like George Clinton to Prince, to like Shaday to like, you know, Michael Jackson to like – just All FuNKD’ Up, all types of music. Giving the audience, again, another chance to see the dance, and then also hear tap dance as the leading instrument in the music. So, it’s a concert, it’s fun, it’s high energy, it’s me, it’s live, it’s all of it.

Bert: Yeah, man. And we can’t wait. I’ve been following your career since the very beginning and I can remember this kind of cool young guy breaking in and trying to reintroduce what I thought was kind of was like an old school maybe best days behind it kind of art form. And, man, not only have you made this style of dance relevant and cool again. You’ve taken it bigger than it’s ever been before, I think. Was that the goal all along, Savion? To keep this art form alive, and to be the best at it like you are today?

Savion: Well, I don’t know that that was my goal, but I guess due to convenient planning by the creator it’s going that way. You know, I’m just a vessel. I’m just a part of the journey. I’m honored beyond measure to be recognized as one who would be responsible for those words you use for me! But, I am just a part of it. I’m so privileged to know these men and women. Again, it’s not even about me. I feel, like you said, the art form has been around. Tap dancing has been around way before me. It’s going to be here long once I’m gone. So, I am, at this point, I don’t feel – actually I’ve never pointed out  I’ve never felt that it was about me yet versus, like, tap dancing. Tap dancing. I’m happy to be a part of an art form that is very important, I think, to the progress of entertainment, and world, and how we shape shift, and allow people to enjoy themselves, and cry, and laugh, and do everything! I just – I happen to be one of those people who evoke that spirit or that thing in people, and I do that through tap dancing. So, it wasn’t my plan. I don’t plan to be the best. I guess I am the best at what I do because only I do what I do. So, just like you’re the best at what you do because only you do what you do. We are all the best at what we do because only we do what we do. So, I’m just here, man, and happy to be, again, mentioned upon, and a part of the art form.

Kelly: And, so, looking back, what first sparked your interest in this art form? Do you remember a specific moment or time that really…

Savion: My mother! My mother, my mother is the blame for this. I have nothing to do with it. My mother , you know, early on we were involved in, you know, music school, my brothers and myself. Growing up in Newark, New Jersey. We went to Newark Community School of The Arts. My mother you know, heavy music influence in my family. You know, my mom, she just signed us up for tap classes. And, you know, the rest is my story.

Bert: That’s it, man. Yeah. Presidents, world leaders, you’ve performed for the biggest of the big, Savion. What was the one moment where you were in front of some sort of iconic, historical, legendary, person when you said “Man, this is real. This is rare stuff right here.”? Did you have a moment like that in your career?

Kelly: You also have the gift of sight, clearly!

Savion: I’ve been blessed to be around, you know, some places, man. Every place is – everybody is just as important. You know, as long as they are able to see the dancing, get a response, or get an emotion from the dance. I can’t recall, man. I think, again, I think that day has yet to come.

Kelly: I think, you know, more than just kids love Happy Feet. Happy Feet and Happy Feet 2, sensational tap dancing! And of course – choreographed by you!

Kelly: How did that come to be?

Savion: That was the great George Miller, who was the director, you know, he just offered me. He offered me this position. I remember specially him coming to a show that I was doing out of town, and he brought this computer, and he showed me what he wanted me to do, and I was like “cool.” You know, anybody who wants to do a film about a tap dancing penguin is my best friend already.

Savion: We fell in love immediately, and it was just an honor, again, to be a part of it. I think, you know, what that did, again, to a certain generation like it does every now and again, we have these – whether they’re characters, or shows, or what have you – they come along, and they spark the interest of a new generation. And, I think that’s what we were able to do with Happy Feet, and Mumble, the tap dancing penguin.

Bert: Yeah, yeah! I mean, you see how when someone contributes a song to a movie, you see how that works. The song is played in the movie or something, but to choreograph an animated character, that’s special stuff, Savion. That’s rare air right there, man. That’s not for everybody, but we are so honored to be speaking with Savion Glover this week. All FuNKD’ Up, his show, coming to State Theatre New Jersey, Thursday, February 7th, 8pm. I am telling you, grab every friend you know, and get some tickets, and come out and see what is going to be an amazing performance from a guy from New Jersey who has kind of reinvented this great art form. And, Savion, more and more people are doing this nowadays. I’m telling you, we run into people all the time that are doing this. I’ve seen it on the morning news shows where people are tap dancing in Times Square.

Bert: This is all over the place, man! It’s almost like you were right at the beginning of this revolution where this came back.

Savion: Yeah, it’s always going to be! It’s always going to be. Like I say, man, tap dancing - it’s like air. It’s going to be here. It’s going to be here forever, man. And people are going to, you know, it was a long time ago it was once enjoyed by a certain generation. It was done all over:  In the streets, in the movies, in TV. I think that time is coming back again where it can be enjoyed in the TV, in the movies, in shows, and enjoyed by the young, the old, all cultures. It’s a very important part of this thing we call entertainment, and show business. It’s here, man. It’s here to stay. Tap dancing is here.

Kelly: Yes, for sure, and we are so looking forward to your show at the State Theatre, All FuNKD’ Up. Now, when you are putting together a show like this, what is the process for you? Is it something, like, in six months, boom, bam, is it done? Is it, like, years in the making because it’s kind of like, a thought in your head, and then it comes years later? Like, what was the process for All FuNKD’ Up?

Savion: Yeah, it’s a combination. With something like this it’s like, I’ve been living with this music, you know, all my life. You know, whatever my mother – whatever we had it in the house – those are the musicians and the music that I have carried with me into my adulthood. So, whenever I get an opportunity to express myself through my productions, I do that. So, again, with All FuNKD’ Up, I realized that, you know, that it had been awhile since an audience had heard or seen me dancing to funk music, or R&B, or soul music. I was doing straight ahead. You know, straight ahead free music with my quartet for a while. And, I just said, you know, I know, again, there’s a new generation, and they need to understand the relationship with tap dancing and the music of today. You know, that’s where this idea came about. All FuNKD’ Up is just, like, all funky music. And, again, tap dancing as the leading instrument, tap dancing in the concert style, giving people the chance to dance, and groove, and enjoy themselves to tap dancing. So, that was the idea that sparked me to get All FuNKD’ Up.

Bert: That’s it, man. Kell, I think he’s going to work on a new step called the “Boom-Bam” after you said that!

Bert: The Boom-Bam. Maybe he’s going to unveil the Boom-Bam at State Theatre. But, YouTube, Savion? Is that the best place to go to see some of your work online, and get a little sample for what you do, right? Do it at YouTube?

Savion: Yeah! Anywhere! It’s all available out there! Savion Glover, you know, Savion Glover Productions, we are at the Hooferz Club, everywhere! I’m out there.

Bert: Awesome, and we’ll find you. Your autobiography is “Wake Up, Be Awesome, Sleep, Repeat” I mean, that’s really all there is for your story, right?

Bert: I mean, every day of your life has to follow that pattern.

Bert: Awesome. Savion, what an honor to talk to you, my man. And all the best to you with the holidays that are coming up.  And February 7th is going to be a night to remember at State Theatre New Jersey. We can’t wait, and we were so happy to talk to you today, and we will see you very soon, my friend! And thank you so much for everything.

Savion: Yeah. Thank you guys, I’m very much looking forward to being there. Jersey, come on out! Have fun!