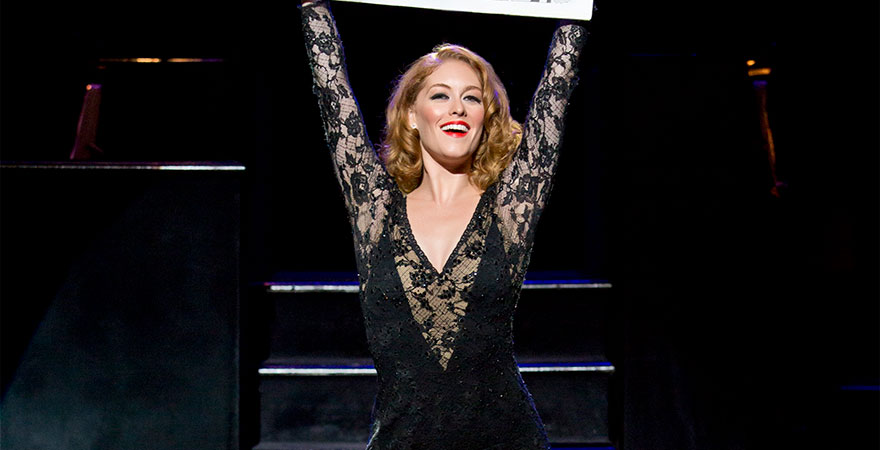 Set amidst the decadent 1920s, Chicago is the story of Roxie Hart, a housewife and nightclub dancer who murders her on-the-side lover after he threatens to walk out on her. It's coming to State Theatre New Jersey for 4 performances only February 15-17! Dylis Croman, Roxie Hart herself, joins us to discuss how this really is a dream role for her, and what it's like performing such an iconic role that numerous people have performed before and how she makes it her own.

with Bert and Kelly from All Access and special guest David Bushman.

Bert:  Welcome back to All Access with State Theatre New Jersey, we’re going to be talking about some upcoming shows a little later on in the program. We are getting ready for Chicago The Musical—four incredible shows over three dates, beginning February 15th. All of the information can be found on stnj.org. Kel, this next guest is going to be the first of two interviews that we will be doing. One this time around, and one again in our next show around Chicago, right?

Kelly:  Yes, we are so very excited to have two different actors each of these weeks. I’ve got my jazz hands ready Bert!

Kelly:  I am totally ready. With us today is Dylis Croman, who plays Roxie Hart in Chicago The Musical. Welcome Dylis!

Dylis:  Thank you so much! I’m doing jazz hands with you.

Dylis:  Yeah, I can do jazz hands in my sleep at this point.

Kelly:  So Dylis, Roxie Hart. What a role! This has to be a dream role for you, right?

Dylis:  It really is, and I say that all of the time. It is a dream role for me. I originally saw it my mentor playing Roxie. In 1996, when the revival first opened up 22 years ago, I saw it from the audience’s point of view—I knew that was what I wanted to strive for. So yeah, I am performing my dream role.

Bert:  Great for you. I mean this is kind of like being the Phantom in Phantom of the Opera—this role is as big as it gets—a role like this in Chicago. This character that people love, people relate to, people are just armored with. They kind of have an idea of what to expect when they see it done on stage. Do you take that into consideration at all, or are you like “I’m going to make this my own and give my own interpretation of this role”?

Dylis:  Yeah, I think the audience sometimes comes in with a preconceived notion of what they are going to see, but I do think the beauty of the show is that you can bring your own spirit to the role. All of the roles: Billy Flynn, Velma, Roxie, Mama Morton. Every single one of these roles had been played by numerous actors through the 22 years. So, the magic kind of lies with bringing yourself to it. I don’t really worry too much about what the audience is expecting. We do eight shows a week and travel a lot, so a half-hour before the show I center myself, warm up, and strive to make every performance a honest performance. Just sharing this legacy with everyone around the world is just a honor, you know?

Dylis:  Well, she’s feisty. I would say she’s very feisty. My Roxie has a lot of—the core of this role—childlike qualities. So, she is kind of like a woman-child. And I really do play the child side of her. Of course she is a grown woman and there’s a lot of essence of woman coming through my performance as well, but I play her playful, and childlike side. I really try to take her full circle. By the end, you really do know who she is. From the beginning to the end, I try to show all sides of her, because Roxie Hart is kind of one of those characters that wears her heart on her shelve and reacts to things pretty quickly. You kind of sees who she is in a lot of these scenes. She’s a vulnerable character as well. I like to play all facets of her. She is a lot of fun.

Bert:  Awesome. No doubt about it. What I try to tell people with a show like this, I know there was a movie adaptation and that’s one thing, but to really experience this show and get the full effect, nothing replaces Chicago The Musical live on stage. There’s nothing like it.

Dylis:  Oh no, there is nothing like it. One thing is, not one show is the same. For me as an actor, I try to make it fresh, honest, and different. In order to do that, it has to be different every night. I can’t just do a canned performance. This cast that you guys will you see in New Jersey, it’s Broadway caliber. We give 150,000% every night. It’s such a great company, and there is so much passion in it. The experience of live theatre is once in a lifetime thing.We cannot cut and action again. You see it as it’s happening, so that’s magical.

Kelly:  Nothing like live performance, that’s for sure. I like the idea that even Chicago can be a different show every night. You know the plot and everything, but it can be a little different depending on what you guys do each night. You would have to rely a lot on your Velma, right? And of course Billy Flynn. So I’m guessing that you have a pretty tight connection with those two in terms of changing it up every night, or your own little inside jokes. I’m definitely sure that you go back and talk about what happened there. Are you tight with those guys?

Dylis:  Yes, very much so. We are lucky enough that in this particular cast. I really, really enjoy my Velma and Billy on stage and off. We have a very, very close relationship, both. We do change it up every night.  We are human beings, so we wake up on different sides of the bed and have different feeling each day. You have to roll with how you are feeling, and you kind of bring that onto the stage. Our director Walter Bobbie always talks about passing the ball. It’s kind of like a game. You give them the ball, and you’re waiting for them to pass it back to you. So, we are lopping our time on stage together, and really feeding off of one another. I always find that it is really important as an actress to really, really look into someone's eyes. Don’t just get up there, act out the show, and not let them in. It really is a passing the ball, passing the hat kind of game, and if you do it that way it can’t help but change you. You’re standing there each scene will be different if you play it that way. You’ll have an understudy going on, where your show changes there too.

Bert:  I think that is what makes for great drama, whether it’s on stage, television, or movies. When actors are really connecting, it brings the audience along and makes the ride that much more enjoyable. We are speaking with Dylis Croman, she is Roxie Hart in Chicago The Musical coming to State Theatre New Jersey February 15, 16, and 17—four shows in total. In addition to the actual performances Kel, there is going to be some other things going on where people who come to the theatre can get involved with some things happening around the performances, right?

Dylis:  Oh man, you’re speaking our language. Free food, drinks, and a dance floor. I will be there.

Dylis:  Oh nice. I look forward to it.

Kelly:  So, there are so many great songs in Chicago. Bert and I always talk about these catchy tunes in this great classic musical. Of course, you’re going to have your favorites, whether it’s something that you’re taking the lead on, or perhaps there is a favorite that you are not even in. What is your favorite time of the show?

Dylis:  Well, my favorite song that I sing in the show is called “Nowadays.” It’s at the very end of the show, and Roxie Hart sings a bit of it by herself. It is kind of at the moment where she has just been completely broken at this point. She has gone through everything, it’s a full circle, and she needs the other character Velma to continue her dream. You see the two characters come together at the end, and put their cane down on the floor with their bowler hats tilted over one eye. It just has such a full circle moment for my character, and I get chills up the back of my neck at that moment every single time I do it. For me it just says it all, and I really do live for that moment in the show. So, “Nowadays” is my personal favorite for me. I used to be an ensemble on Broadway, and I played the part of Moana, which is one of the cell block tango ladies, and that is my favorite part of the show. Unfortunately, Roxie is not in that number so I can’t perform that anymore. That piece is just iconic, the song, the six strong women standing up there telling their stories. So, “Cell Block,” and “Nowadays” would be my two favorites in the show.

Bert:  Alright, now I’m going to be elbowing the person next to me saying “This is her favorite part right here, watch this.” Let me give you those dates and times again for the performances so you can plan to come out for these shows: Friday, February 15 will be the opening night performance at 8 pm. When you are on the website, stnj.org, look into those cash party tickets as well. You’re going to love those. Saturday, February 16, two performances— that’s 2 pm and 8 pm. Sunday, February 17 at 2 pm. The pride night is this Saturday night show. Look at that on the stnj.org website and plan on seeing Chicago The Musical on stage at State Theatre New Jersey, starring the incredible Dylis Croman. It was great to speak with her today. Dylis, thank you and good luck with everything. We will see you in New Brunswick very soon, and what a honor to speak with you.

Dylis:  Thank you so much. Thanks for having me.