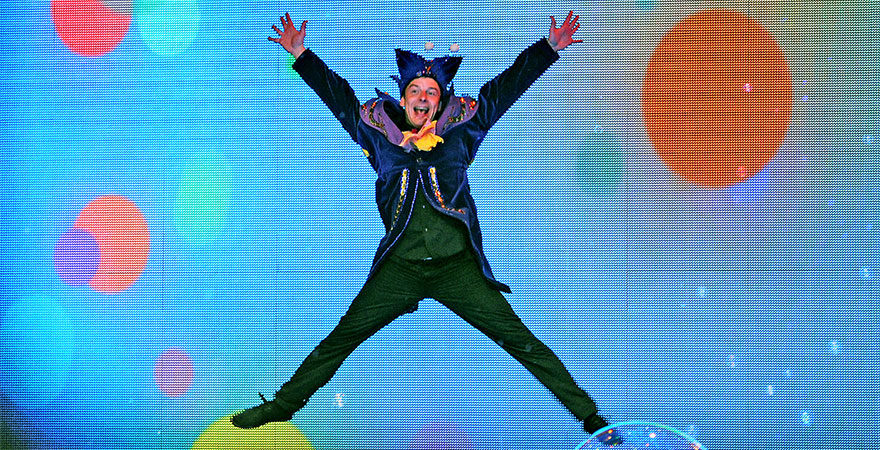 Explore the wondrous underwater world of Bubblelandia and all its beautiful sea creatures in B—The Underwater Bubble Show on March 30! Producer and Bubble Artist Enrico Pezzoli joins us to discuss how they were inspired by Cirque du Soleil and what the audience can expect in this magical adventure!

Bert: We’re Back on All Access with State Theatre New Jersey, still to come, we’re going to be talking about some upcoming events, and boy, that calendar at State Theatre is really really filling up. Kell, we’re ready for two terrific performances that are happening on the afternoon of Saturday, March 30th. And this sounds like a show that is going to be fun for the entire family, and it has to do with – it’s an underwater bubble show, is that right?

Bert: Wow, he beat you to the answer already!

Kelly: Nice talking to you! So, Enrico, tell us all about the show and what it entails. What kind of performance is it?

Enrico: So, basically it’s, well – we got the inspiration from Cirque Du Soleil because we love it. And so, wanted a show that was colorful with some circus mice, they’re very good! Talented circus performers, and full of action, and interaction with the audience. So, we just – and basically we perform a lot of bubbles because our specialty is exactly soap bubbles. But we do also some magic, then we have a lot of amazing circus performers, and together with Latvian writer we wrote also a story line, so it’s more theatrical and that’s why we play mainly in theaters. So, we do not play circus arena, but theater stage. And so, it’s a theatrical circus show, so this is how we call it.

Bert: I think the State Theatre is a perfect venue for a show like this, Enrico. So, if I’m in the audience watching this show it’s almost like I feel like I’m watching an underwater kind of performance, right?

Enrico: Actually, yes! Of course a lot of people are asking “but why you came up with water?”  Of course, it’s a theatrical illusion, so we used a lot of theatrical special effects to use. For instance, lasers to simulate waves off the walls using the blue lasers. Then in one moment we find a lot of the light blue textiles over the head of the stage that look like waves covering and putting people underwater, there is also a little bit of water I will not spoil it, so there will be a surprise for those in particular coming. But, the idea is to give to the audience the feelings of being able to breathe underwater.

Kelly: Nice. And this is kind of a full musical show, right? There’s no spoken word, it’s all told with music?

Enrico: Correct, yes. We wanted also a performance that could play everywhere, and that’s also why we’re touring all over the world, that’s really very good. And so we have a very good mime, he’s one of the best physical actors from Latvia. Cause he’s impersonating the main character, who is Mr. B. And people often don’t understand immediately the beginning because he’s playing a general – the average business man. That’s why we put him in a mask, we didn’t want to have his face visible in the beginning because he’s representing almost everyone. He’s a business man, he’s dressed up like a grey business man and at the beginning he is acting like a very busy working man. And then, he will run through all the show and we don’t use any words, just his acting, his miming, and the beautiful music composed from a Latvian – one of the best also Latvian composers. So we try to get the audience in the show with this. It actually makes things maybe a little bit more complicated in the beginning first to get in the story, but a lot easier then to follow everything, because you don’t need to concentrate on effects, so everyone, adults and kids alike, can follow it without a problem.

Bert: It sounds like to pull off a show like this, Enrico, you need people that can act, that can be an acrobat, that can sort of pull off an illusion like this. This has to be quite a cast you put together for this.

Enrico: Well, yeah. There are eight very talented performers in the show, and each one is doing a lot of things, so not only his act. Many of them have even two acts that next one’s better than the other. Then we have all the interaction, and we need to have a team that is very well trained to walk together, for to keep the feeling, so we cannot improvise, we cannot get last minute call out or things like that. It’s really – this show it’s made a lot of concentration from the part – and what is happening back stage is amazing because people often see the show, but don’t have idea what is happening behind. Each minute there is people running left and right, changing dress, putting on other costume, or moving props. So, often the theater house are asking “Wow, I’ve never seen a company working so much?” even before and after the performance, because after the performance each one is concentrating on putting back his props. Nobody wants nobody touching his or her props. So, there is a lot of job going in before, during, and after the show and that’s why we need a really – a very good team to do that.

Kelly: Sure. And you mentioned the soap bubbles of course, which are kind of your specialty and a big part of this show obviously, how did you first come to be involved with, you know, doing soap bubbles? Was that something that you just kind of fell into, or did that just come to you one day? That you were going to start doing soap bubbles on stage.

Enrico: Well, well, we started to perform with bubbles some 20 years ago, and even a little bit more. And at that time there were not so many bubble performers. There were a bunch here in the U.S.A. maybe some six, seven, less than ten, let’s say that less than ten that are still working today and are very very known here in the U.S.A. And there were some, four or five, in Europe. So, all around the world really a small bunch of people working with bubbles. And at that time, I was working a lot like a magician because my second activity aside from the theater is magic, that’s a passion that I’ve had from when I was a kid. So, I was working a lot with that, and I had my comedy magic act. But, for magic there is a huge competition and there was also at the time, I mean 20 years ago was not different, maybe even worse. Today, maybe a little bit easier with internet to sell your show, whatever. But at the time, was really very struggling for everyone. And so, I started to think what you do to make the act a little bit different, to perform something – and I discovered bubbles! I saw one clown doing just one big bubble, and I thought  “Oh, this is interesting, I never saw a bubble so big, I bet it’s possible to do something else.” And at the time he taught no increments, and he does much better for me, because  in this case you had to seek them to use your hands. And I slept there, and I started to develop my routine, to my effects, to my things. I made a short research in the books. Whatever I could find speaking of how bubbles was very very lethal. And I created my first act together with my wife.  It was a specialty act, we worked in opera for many years. It was called “Bubble Opera.” it was a bubble duo, with bubble effect, modern opera music celebrating and singing modern opera, opera costume. So, a mix between rock opera, modern opera, classic opera, opera costumes, and was more for adult audience. I mean, not like a kid show, but more for corporate event. And with this show, we started to do work all around the world. We been in 47 different towns, we still really really tour the world. But this was mainly for corporate. Opening, shopping opening, shopping mall, attraction park, and whatever. And then we understood that something was working. The people like it, but at the same time with the help of the web and the whatever else, also because people see that there was something working very well, the competition started to grow up. So, it came out  with tons of bubble performers, today are like mushrooms, I just open the web and see ten or 15 each day coming out. There are so many that started to be even more than magic, I mean, this time 20 years ago we had a lot of problems with magicians. Then, we started to have the same thing with bubble performers with the difference that with bubbles you don’t have so many things to do, so each performer started to copy the other. And there were, and there are still today a lot of clones. An army of clones that do the same things with bubbles, and ten years ago, again, with my wife, after ten years of working together with the bubble act we sat and we thought “Ok, what is going to be after three, four, five, or more years?” There will a lot of bubble performers, people will lose interest in bubbles, and we’ll need something standard that everyone knew. And we started to think “Let’s try to create something that nobody do.” And that was our goal, and our winning goal because we created Underwater Bubble Show that took of course two years to put together. But, at least it was something different that new today, and nobody do. Actually, we are the only one big touring show with not only bubbles, but also circus performers and variety of this kind. So, there are a lot of now bubble performers, but no show like this one. That’s why also we are working and touring so well, and we are happy for this because – it’s a work in progress. It started from simple bubbles, and it became a full bubble show experience.

Bert: Well, let’s give out the information again for B – The Underwater Bubble Show. It’ll be at State Theatre New Jersey for two performances Saturday, March 30th at 2 and 5pm. Stnj.org, and Kell, as State Theatre continues to be sort of the leader, if you will, in providing entertainment for autism affected families, there’s going to be a special performance at 5pm that day, right?

Kelly: Yes, the 5pm performance is an autism friendly relaxed performance. So, come on out for B – The Underwater Bubble Show. Thank you, Enrico, for being on the show today.

Enrico: Thank you very much.

Kelly: And we look forward to seeing you under the sea, and with all your fun little characters! 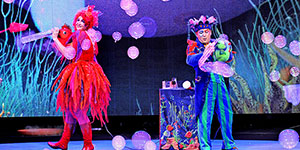 Explore Bubblelandia with Mr. B and his Sea Creature friends!