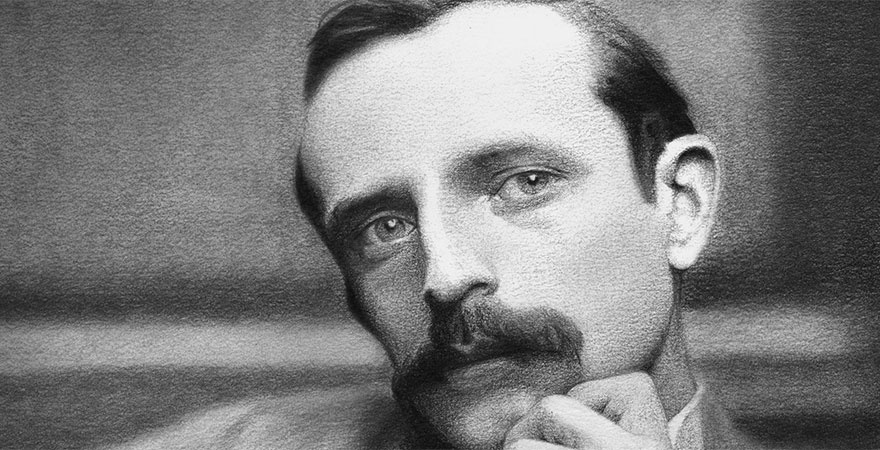 Finding Neverland is making its way to State Theatre New Jersey Friday, March 22 and Saturday, March 23. Finding Neverland is the winner of Broadway.com’s Audience Choice Award for Best Musical. The show tells the story behind the creation of one of the world's most beloved characters: Peter Pan. Here is an in-depth look of the man who started it all, author J.M. Barrie.

James Matthew Barrie was born on May 9, 1860 in Scotland. He was the seventh of 10 children and the third boy. They were a poor family but their mother Margaret loved books and read classics like Robinson Crusoe to her children around the hearth. Barrie loved to hear stories and wrote many stories for his own amusement. Growing up, Barrie was diminutive in height with high-pitched boyish voice. Even as an adult, he stood only 5 feet 3 inches tall. In January of 1866, tragedy struck the Barrie family. The second oldest brother and favorite son, David, fell while playing on the ice, hit his head, and died. His death filled the family with sadness and their mother fell into a deep depression. To help his mother with her grief, Barrie dressed in David’s clothes and pretended to be David around his mother. This was Barrie’s first foray into acting and allowed him a venue to pretend to always be a boy. In addition to play-acting for his mother, Barrie wrote and performed plays for the neighborhood children. From 1873 to 1878, Barrie attended the Dumfries Academy and it was here that he saw his first professional theater performance. This performance inspired him to start a theatrical society at his school.

After Dumfries, Barrie attended Edinburgh University from 1878 to 1882 with an intense desire to become a professional writer. After graduating, he wrote reviews of plays and books, furthering his love for the theater. Later, he wrote articles for London magazines and by 1888, the St. James Gazette had published many of his articles under a pseudonym. In 1891 his novel, The Little Minister, was published and considered successful. In the same year, he wrote a play called Isben’s Ghost that received moderate success and a one year later in 1892, his play Walker, London was a huge success.

During the production of Walker, London, Barrie met the star of the play, an actress named Mary Ansell. Mary was an intelligent and stylish aspiring actress. The two eventually married in 1894 in Scotland. While honeymooning in Switzerland, the newlyweds purchased a St. Bernard puppy and named him Porthos. The beloved Porthos eventually became the inspiration for the character of Nana.

In 1904, Barrie wrote his masterpiece, Peter Pan. From the beginning, Barrie had a vision for the stage production of Peter Pan, and he knew he wanted his characters to actually fly across the stage. During production, several security measures were put in place to keep the flying and other special effects secret from the public until opening might. Before opening night, when the flying harnesses were complete, Barrie invited the Llewelyn Davies boys for a test run to soar through the theater. The show opened on December 27th, 1904 in London and was considered an immediate success.

In 1906, the novel Peter Pan in Kensington Gardens was published. One year later, Mr. Llewellyn Davies died of cancer. On his deathbed, Mr. Davies’ appointed Barrie, now known as Uncle Jim, guardian of his sons in conjunction with their mother Sylvia. In 1909, Barrie reluctantly granted his wife a divorce and in the following year, 1910, Sylvia Llewelyn Davies died. In 1910, Barrie was the sole guardian and provider for all five Llewellyn Davies sons, now age seven to 17. Barrie constantly edited and reworked the production of Peter Pan and as a result, it was not until 1928 that the play version of Peter Pan was published.

On June 19th, 1937, at 77 years of age, Barrie died of pneumonia. Upon his death, Barrie gifted the copyright of Peter Pan to the Great Ormond Hospital for Sick Children in London. This gift entitled the hospital to all the proceeds from the sale of any book, play, or associated sale of Peter Pan with the stipulation that the total sum earned never to be revealed. This is known as, “The Peter Pan Gift.”