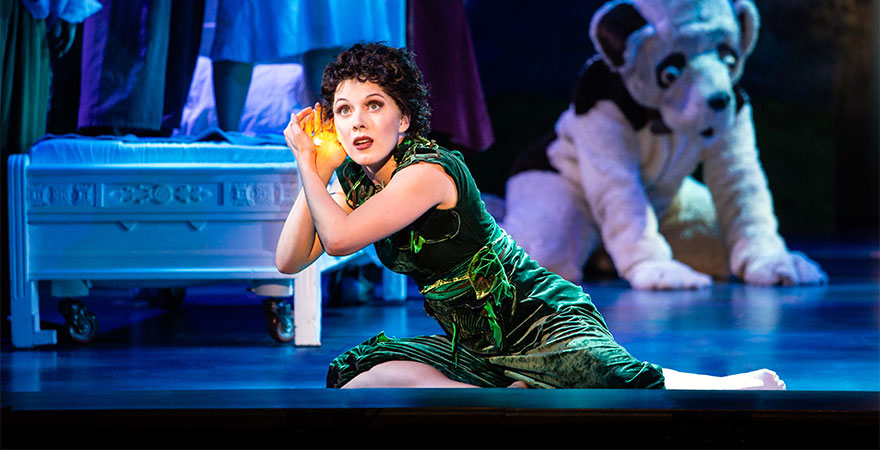 Since Scottish novelist J.M. Barrie created the character of Peter Pan for a stage play more than a century ago, the fanciful Neverland universe has inspired endless plays, movies, television shows, books, music, video games, and even a psychology syndrome that describes a person that has the inability to grow up. The character of Peter Pan has been depicted in numerous ways, but ultimately represents the fun and freedom of childhood for children and adults alike. See this creation in action on stage at Finding Neverland on  the State Theatre stage from March 22-23.

Peter Pan was first introduced to the world as a character in J.M. Barries’ Peter Pan, or The Boy Who Wouldn’t Grow Up in 1904. Since then, audiences have sat through plentiful stage plays and Broadway shows witnessing the many portrayals of Peter Pan and his story. Most of these plays have simply gone by the name Peter Pan from Jerome Kern’s 1924 Broadway adaptation to Timothy Sheader and Liam Steel’s 2015 production. Some playwrights have been more creative with the name of their plays, namely Jim Steinman’s Neverland (1975), Liza Lorwin’s Peter and Wendy (1997), Phillip C. Klapperich’s The Terrible Tragedy of Peter Pan (2002), Rick Elice's Peter and the Starcatcher (2012)Jeffrey Seller’s Fly (2013), and James Graham’s Finding Neverland (2014).

The Neverland gang has been featured in television shows, such as Peter Pan and the Pirates on Fox kids, Jake and the Never Land Pirates on Disney Junior, and Neverland on Syfy. The show Once Upon a Time has featured not only Peter Pan, but Tinkerbell, Captain Hook, Wendy Darling, and the Lost Boys.

Many musical artists have referenced or have been inspired by Peter Pan.These songs consist of “Lost Boys” by Ruth B, “Bangarang” by Skrillex, “Enter Sandman” by Metallica, “Fireflies” by Faith Hill, “Hook” by Blues Traveler, “It’s All Coming Back to Me Now” by Celine Dion, “Peter Pan” by Kelsea Ballerini, “Same Drugs” by Chance the Rapper, “Something’s Not Right” by Lily Allen, “Somewhere in Neverland” by All Time Low, and “Stronger” by Kiesza.

The influence of Peter Pan can be seen in numerous aspects of our lives. From plays, movies, television shows, books, music, video games, and those around us. The timeless characters of Neverland will forever remind us that all we need is faith, trust, and a little pixie dust.