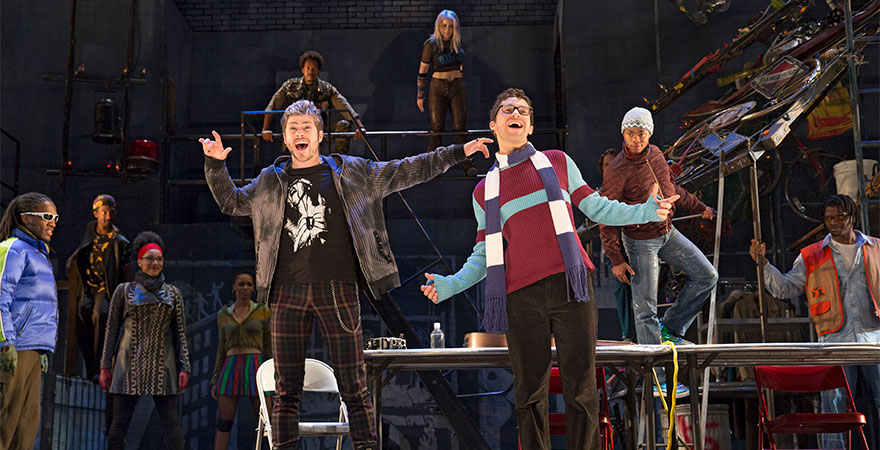 It is time to get excited for the return of RENT, coming to The State on April 2-4. Rent is a Pulitzer Prize and Tony Award®-winning masterpiece that follows an unforgettable year in the lives of seven artists struggling to follow their dreams without selling out. Here is an in-depth look at the impact Rent has had since its opening over 20 years ago and how it continues to inspire people today.

On April 29, 1996, a musical opened on Broadway that looked and sounded unlike anything that had come before it. It told a powerful, moving, heartbreaking, and ultimately uplifting story of young, impoverished New York artists who were seeking to make their way in the world, longing to connect, and trying to survive the looming specter of AIDS.

The actors were black, white, and brown; the characters were straight, gay, bisexual, and transgender. Although the show was famously inspired by Puccini’s opera, La Bohème, it was also a reflection of the life of its creator, Jonathan Larson, who wrote the book, music, and lyrics. His score brilliantly melded Broadway savvy with contemporary rock, and the show captured the zeitgeist of a particular place at a particular moment in time.

The show, of course, was RENT, and it became a phenomenon. A few weeks before the musical’s Broadway premiere, Larson, who died of an aortic aneurysm the night before RENT was scheduled to open Off-Broadway, was posthumously awarded the 1996 Pulitzer Prize for Drama. The show would go on to win the Tony Award® for Best Musical, and run for over 12 years. It also attracted legions of fiercely devoted young theatergoers affectionately known as RENTheads, who returned to the show again and again because it spoke to them so personally. RENT was a life-changing experience for them and everyone connected with the show, and a game-changer for Broadway.

To celebrate the musical’s 20th anniversary, key members of the original creative team have reunited for a national tour of RENT, enabling a new generation to discover why the show is so special—and why it continues to have a profound effect on audiences.

“It has enormously valid things to say about the ways in which we all seek out community and form families, and how we take care of one another in very difficult times,” says Michael Greif, who directed the original Off-Broadway and Broadway productions. “The message of the musical is to truly appreciate the time that we have and to truly appreciate each other because you don’t know when someone will be gone from your life.”

Melissa Anelli, a co-founder of BroadwayCon, is a proud RENThead who saw the show for the first time when she was 16. “I had never seen so much youth and vibrancy onstage before, and the music just blew my mind,” says Anelli, who has seen RENT more than 50 times. “The show reflected the way I felt about civility in the face of sickness, and civility regardless of sexual preference. RENT is about living, and loving, and caring, and treating people with respect. The show teaches you so much about humanity, and dignity, and friendship, and that will always be relevant.”

Anelli is one of countless thirtysomethings who can trace their involvement in theater directly to RENT. Lin Manuel Miranda is another. “I was taken to see the show for my 17th birthday, and it was seminal for me,” says the Pulitzer Prize-winning writer of Hamilton. “I’d never seen a musical that took place in present day, and in the Village. I knew I was going to be in the arts, and it meant so much to see these kids struggling with how to survive and make a living, and not sell out their principles. It hit me like a ton of bricks.”

Greif adds, “In the past five years, so many young composers and theater talents have told me that RENT enabled them to begin to see themselves as part of the American theater. It’s been very gratifying and moving to me and everyone associated with RENT to know the impact that the show has had on this next generation.”

Two decades after RENT premiered, the show’s legacy is boundless. It continues to inspire a generation of creative artists that is expanding the scope of musical theatre and, in turn, reaching young audiences. All these years later, RENT retains its immediacy, imparting ideas that resonate with our humanity and reminding us to measure our lives with the only thing that truly matters—love.

RENT continues to inspire generations of theatregoers as it makes its way to State Theatre New Jersey for three performances from April 2 to April 4.