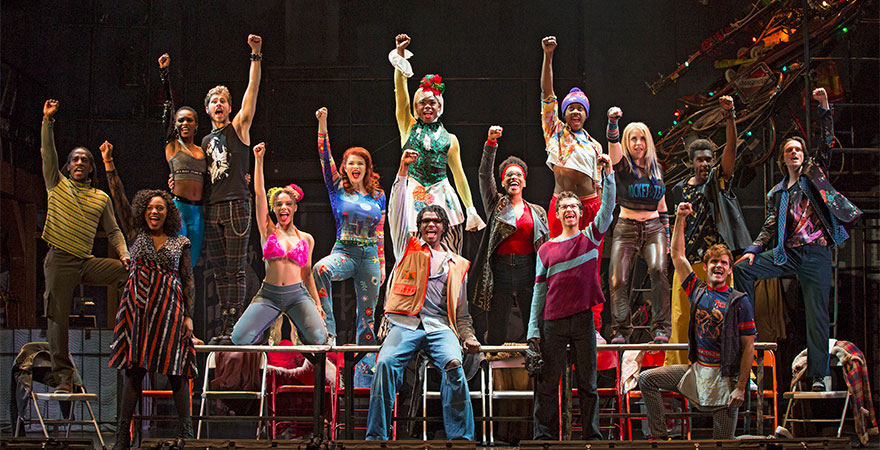 "La Vie Boheme" is one of the most iconic songs in RENT, and that will hold true when the 20th Anniversary Tour returns to State Theatre New Jersey April 2-4. While many people can sing along to every lyric of Larson's song, let's break it down a bit and learn more about the world of RENT.

[WAITER]
You sit all night, you never buy!

Larson depicts the socioeconomic gaps seen in the city through opposing characters. Most of the main characters (Mark, Roger, Mimi, Angel, Collins) are depicted as very poor while Benny is quite wealthy. In doing this, Larson is able to show how poverty-stricken the East Village (an area that was inhabited by mostly immigrants, people of color, and artists) was at this time. Source: Rent: Reinventing the Musical Genre Through the Limitations of Representation by Rori Nogee

[ALL]
Wine and beer!

[MAUREEN]
The enemy of Avenue A
We'll stay

Alphabet City is a neighborhood located within the East Village in the New York City borough of Manhattan. Its name comes from Avenues A, B, C, and D, the only avenues in Manhattan to have single-letter names. There was a large hispanic presence in the East Village in the 90’s which is demonstrated through Mimi and Angel’s characters. The setting of the show in Alphabet City is very important to the diversity of the show itself. Source: Rent: Reinventing the Musical Genre Through the Limitations of Representation by Rori Nogee

[COLLINS]
What brings the mogul in his own mind
To the Life Cafe?

The Life Cafe was a real establishment in New York City where Larson was said to have completed most of his writing for RENT. He spent much of his time ensconced in a corner, researching and interviewing patrons to craft the Alphabet City vibe.

[BENNY]
Was the yuppie scum stomped?
Not counting the homeless
How many tickets weren't comped?

Remember in “Today 4 U”? Angel is directly responsible for Alison’s dog’s death–the one that jumped off of the building due to Angel’s loud drum playing.

[BENNY]
Mimi, I'm surprised
A bright and charming girl like you
Hangs out with these slackers
Who don't adhere to deals

They make fun, yet I'm the one
Attempting to do some good
Or do you really want a neighborhood
Where people piss on your stoop every night?

Bohemia is a metaphorical place where artists and writers who lead unconventional lives live. Bohemia is also a term for an artistic subculture in the 1900’s.

A fallacy in your head
This is Calcutta

Calcutta (or now known as Kolkata) is an area in East India that went through an economic depression in the late 80’s and early 90’s. Benny is most likely saying these character’s world isn’t a magical land where a lot of artists get paid well, but rather, these characters are going through economic problems themselves.

[MARK]
Dearly beloved
We gather here to say our goodbyes

Requiem masses in Catholicism begin with this Latin hymn. This comes from the medieval Latin hymn “Dies irae” written in the thirteenth century.

This line is Greek for “Lord have mercy”, the beginning of an important prayer in the Greek Orthodox Church. This phrase has been cited as “pre-christian” which continues the idea of this song beginning as a “funeral” for Mother Earth, a being older than time.

This is the beginning of a mourner’s Kaddish in Judaism.

We raise our glass
You bet your ass, to
La vie Bohème

“La vie Bohème” literally means “the bohemian life” and is also almost the same as the name of the play that inspired this musical: La Bohème.

To loving tension, no pension
To more than one dimension
To starving for attention
Hating convention
Hating pretension
Not to mention, of course
Hating dear old Mom and Dad

A New York City newspaper founded in 1955. Today, the Voice is known for its staunch support of gay rights, though it hasn’t always been that way.

To any passing fad

To being an us, for once
Instead of a them

[MAUREEN]
Is the equipment in a pyramid?

[JOANNE]
It is, Maureen

[COLLINS]
It tastes the same

[MIMI]
If you close your eyes

[WAITER]
And thirteen orders of fries

Thirteen orders of fries suggests there are thirteen sitting at the table. The staging of the live show does seem to reference the Last Supper with all characters sitting on one side of the table. This is likely intended, as 13 at a table holds significance.

Is that it here?

[ALL]
Wine and beer!

“Causing A Commotion” is also a song by Madonna, a gay icon and a very popular artist at the time. In a song with so many cultural references, Madonna needs a mention.

[MAUREEN & COLLINS]
Compassion, to fashion, to passion
When it's new

Susan Sontag (1933-2004) was an American writer and activist, writing extensively on AIDS and illness.

Stephen Sondheim (born 1930) is considered one of the greatest, if not the greatest, theatrical composers in history. Jonathan Larson, the show’s author and creator, was taught in musical theater writing by Sondheim himself.

[FOUR PEOPLE]
To anything taboo

Bob Dylan (born 1941) is an American singer-songwriter known for his protest songs.

Lenny Bruce (1925-1966) was an American stand-up comedian famous for his biting commentary on society.

Langston Hughes (1902-1967) was a jazz poet and a key figure in the Harlem Renaissance of the 1920s while also a notable figure in the queer culture of the time.

[MAUREEN]
To the stage

Uta Hagen (1919-2004) was a German-American actress and drama teacher. As a name on the Hollywood blacklist, her film opportunities were scarce, leading her to focus on the stage, which in turn led to two Tony Awards for Best Actress in a Play.

Buddhism originated in Ancient India and eventually spread to the rest of Asia (gaining popularity and being the fourth largest religion). Buddhism, however, spread to Western culture some time around the 1960s as part of the “counterculture” movement of post World War II, the Civil Rights Era in the United States, and Vietnam War Era.

This is an alternate interpretation of The Wizard of Oz. While Dorothy Gale and Toto did fly over the rainbow to Oz, they went there by accident, not to get away from Auntie Em. Judy Garland, the actress playing Dorothy, is also a gay icon.

[MAUREEN]
And wipe the speakers off before you pack

Pee-wee Herman is a comedy character created by American comedian Paul Reubens. Pee-wee appeared in the 1985 film Pee-wee’s Big Adventure and the TV series Pee-wee’s Playhouse, which ran from 1986-1991. The film and series gained popularity with adults for their odd, subversive humor.

Turpentine can be used as a cheap inhalant for getting high and also as a way to clean oil paints off of brushes. In a song about freedom, and the arts, very fitting.

Gertrude Stein (1874-1946) was an American novelist and poet. She is partly notable as having survived being a Jewish lesbian living in Nazi-occupied France.

Michelangelo Antonioni (1912-2007) was an Italian filmmaker who challenged traditional storytelling.

Bernardo Bertolucci (born 1941) is an Italian filmmaker. He holds two Academy Awards, Best Director and Best Adapted Screenplay, both for the 1987 film The Last Emperor.

Akira Kurosawa (1910-1998) was a Japanese filmmaker. Regarded as one of the most influential filmmakers in history, he directed 30 films over 57 years.

Carmina Burana is the name given to a manuscript of 254 written works mostly from the 11th and 12th centuries. Most of the works are irreverent and satirical. Carl Orff famously adapted these manuscripts into an orchestral cantata, whose “O Fortuna” will be immediately recognizable to many listeners.

[ALL]
To apathy, to entropy, to empathy, ecstasy
Vaclav Havel, The Sex Pistols, 8BC

Václav Havel (1936-2011) was a Czech writer and philosopher. As a playwright, he used absurdism to critique communism. In 1993, he became the first president of the Czech Republic.

The Sex Pistols were an English punk rock band. They lasted two years and released one studio album, but their reputation for bucking the system lives on.

8BC was a nightclub and performance space in the East Village neighborhood of New York City. It opened in 1983 and closed just nine days short of its second anniversary.

To no shame, never playing the Fame Game

[COLLINS, spoken]
In honor of the death of bohemia, an impromtu salon will commence immediately following dinner. Mimi Marquez, clad only in bubble wrap will perform her famous lawn chair-handcuff dance to the sounds of iced tea being stirred

[ROGER, spoken]
And Mark Cohen will preview his new documentary about his inability to hold an erection on high holy days

[MARK, spoken]
Maureen Johnson, back from her spectacular one-night engagement at the eleventh street lot, will sing Native American tribal chants backwards through her vocoder, while accompanying herself on the electric cello, which she has never studied

[BENNY]
Your new boyfriend doesn't know about us

[MIMI]
There's nothing to know

[BENNY]
Don't you think that we should discuss --

[MIMI]
It was three months ago

[BENNY]
Where is he now?

[MARK, spoken]
And Roger will attempt to write a bittersweet, evocative song

(Roger picks up a guitar and plays)

That doesn't remind us of "Musetta's Waltz"

[COLLINS, spoken]
Angel Dumott Schunard will model the latest fall fashions from Paris while accompanying herself on the 10 gallon plastic pickle tub

[ANGEL, spoken]
And Collins will recount his exploits as anarchist, including the tale of the successful reprogramming of the M.I.T. virtual reality equipment to self-destruct, as it broadcasts the words:

ACT UP stands for AIDS Coalition to Unleash Power, a political action response group started in 1987 in response to the AIDS crisis. They, amongst other actions, staged multiple sit-ins, die-ins, rallies, and protests to fight for better AIDS research, funding, and access to medication.

[MIMI]
Excuse me, did I do something wrong?
I get invited, then ignored all night long

[ROGER]
I've been trying, I'm not lying
No one's perfect, I've got baggage

[MIMI]
Life's too short, babe, time is flying
I'm looking for baggage that goes with mine

[ROGER]
I should tell you--

[MIMI]
I've got baggage too

[ROGER]
I should tell you--

AZT is an antiviral medication that can help those living with AIDS have a greater quality of life and live longer.