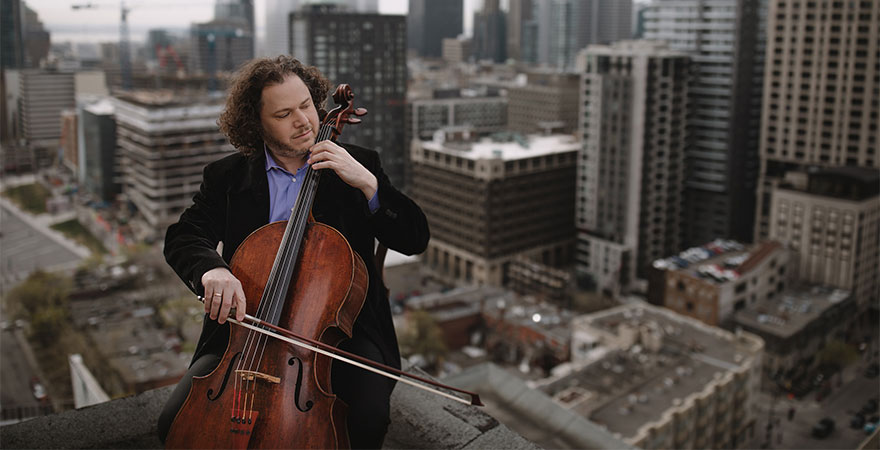 Cellist Matt Haimovitz is anything but complacent. Instead of fitting inside the normative boundaries of society, he is constantly pushing the limits of both his performances and the music he is playing to provide a different event for spectators to absorb. Haimovitz has been on tour, bringing classical music to concert halls and venues all over the world. His unconventional methods and simultaneously “surprising” performances have shed a new light into the concert world. It is his innovation and daring nature that have made his on-stage presence so desirable. Haimovitz, along with pianist Navah Perlman, will perform at State Theatre New Jersey on Sunday, November 17, 2019. Join us this fall when these soloists come together to kick off The State’s Classical Season Celebration.

Born in Bat Yam, Israel, Haimovitz used his thirst for music and innovation as his inspiration while growing up. Moving to the United States at the young age of five allowed him to expand his knowledge of classical music and rhythms. It was in 1984—at the age of 13—when Haimovitz made his debut as a soloist with Conductor Zubin Mehta and the Israel Philharmonic; and then produced his first recording with the Chicago Symphony Orchestra for Deutsche Grammophon (Universal Classics) at 17. During this time, he studied at the Collegiate School in New York and Juilliard under the wings of music greats and cellists Leonard Rose, Ronald Leonard, and Yo-Yo Ma. Since then, he has performed on some of the most prestigious stages including Carnegie Hall with a collection of the most esteemed orchestras and soloists. He also mentors young musicians at McGill University’s School of Music in Montreal.

After working with Deutsche Grammophon on a number of albums, Haimovitz forged his own independent recording label—Oxingale Records—with composer, producer, and wife Luna Pearl Woolf in 2000. Originally established to publish CDs of his recitals, the label expanded in 2010, now featuring the works of others, as well as music composed and produced by Haimovitz. Since 2015, the label has merged and collaborated with PENTATONE, Haimovitz’s current home.

During his grassroots journey to incorporate all genres on any stage or venue, Haimovitz has remained warm and expressive. He cares about playing and manifesting his love for music on a platform for all to enjoy. Haimovitz has taken traditional classical musicians—Bach, Beethoven, Glass—to not only concert halls, but to clubs all over the world. In 2002, Haimovitz was the first classical artist to play at New York’s CBGB punk rock club that was filmed by ABC News for Nightline UpClose. Although he did not receive rave reviews for this performance, he was excited to share his life with a different crowd. He stated in an interview with Artist Editor Tim Janof for Internet Cello Society (ICS) that, “Often this music [classical] is premiered and forgotten, but I have the chance to perform it again and again!”

Haimovitz’s uncommon and varied style includes the work of other artists from various genres. In 2003, he embarked on a 50-state Anthem tour that featured his cellist arrangement of rock legend Jimi Hendrix’s “Star Spangled Banner.” During this time, he performed in night clubs, restaurants, and untraditional locations to bring a variety of music from American composers to a wide range of audiences. In relation to his music, Haimovitz has stated, “…I will experience a new way of listening and discover a musical language that, once discovered, seems inevitable and natural” (Datebook). Each piece is played on his Venetian cello hand-crafted by Matteo Gofriller in 1710, recently repaired after it took a fall in 2018.

For his work and bold performance choices, Haimovitz has received a number of awards including a Grammy® nomination for his album Meeting of the Spirits as Best Classical Crossover Album (2010) and a Grammy® Award for Best Classical Producer of the Year (2016) under David Frost. He has also achieved the Avery Fisher Career Grant (1986), the Grand Prix du Disque (1991), the Diapason d’Or (1991), and is the first cellist to receive the prestigious Premio Internazionale “Accademia Musicale Chigiana” (1999).

From classical concert halls like Carnegie to performances with acclaimed orchestras such as Berlin Philharmonic and the New York Philharmonic, to not-so classical spaces like parks, bars, and colleges, Haimovitz has pushed the boundaries to music to another level. His idea to spread classical music to any and all venues has become less of a goal and more of his life passion. Come see Matt Haimovitz perform at State Theatre New Jersey on Sunday, November 17 when he teams up with pianist Navah Perlman for the first of many classical music events coming this fall.