Interview with Justin Scribner, Associate Director for Once on This Island 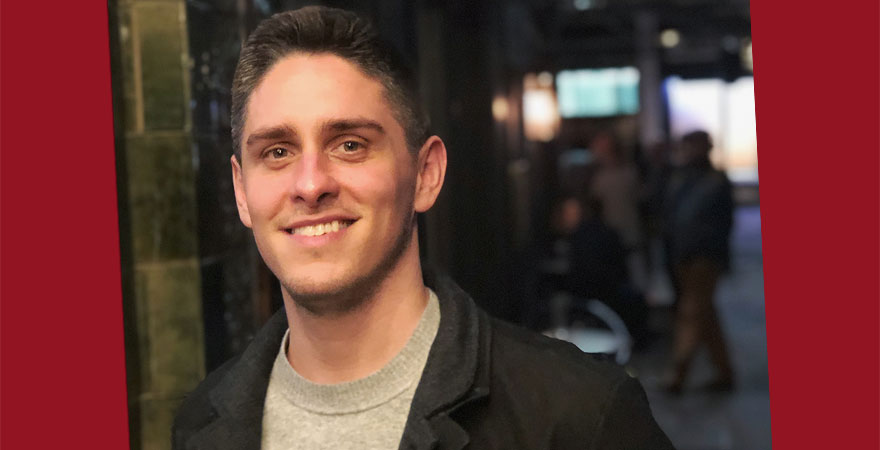 Winner of the 2018 Tony® Award for Best Revival of a Musical, Once on This Island will be at The State June 5-7, 2020. Associate Director Justin Scribner joins us to chat about recreating this incredible show in a very contemporary setting and some of the surprises the audience can expect along the way.

with Bert, Kelly, and Hanna from All Access and special guest Justin Scribner.

Hanna: I am! I got a chance to see the latest Broadway revival when it was on and I was just blown away, so I am super excited that we’re getting it as part of our Broadway season and that we’re going to have an opportunity to show more people how incredible this show is!

Kelly: Hello! So Justin, we’re excited! Tell us about the tour that’s just going to be super exciting! Haha!

Justin: So, it’s a really special piece that is filled with heart. It is a beautiful musical that Lynn Ahrens and Stephen Flaherty wrote as a Caribbean retelling of The Little Mermaid. And it is a beautiful piece for 16 actors and it was originally done on Broadway in The Round. In a theater that has seats all the way around and we’re restaging the show to be able to play to more traditional proscenium houses all around the country to share this story which is so touching and the music is so powerful.

Kelly: I mean, that sounds like quite a challenge, I mean, going from in the round to, you know, touring on these different size stages, what kind of, what goes into putting that together?

Justin: Well, you know, we successfully had the show on Broadway last year and won the Tony® Award for Best Revival and part of that was the intricate, beautiful staging that Michael Arden, our director created on the original company. And also part of that, I think, might’ve had something to do with all of the crazy elements that were at play on stage. We had a stage filled with sand, which we will have on tour as well. Actors performing barefoot in sand and we have actors playing instruments made out of trash, we have actors getting rained on, and we have animals, and all sorts of, kind of, a mélange of circus and theater tricks that we’re using to tell this very sweet story of a Haitian villager, who, she falls in love with someone from the other side of the island… sounds a little familiar to The Little Mermaid myth, and she makes her way to the rich side of the island and with her connection to the Gods of the island, the God of Water, and the Goddess of Love, and Mother of the Earth, and the Demon of Death, she has kind of a mythological love story unfold before her. Yeah! I can’t say enough good stuff about the show. I’m very proud to be working on it, and the cast, some of the cast is actually from the original Broadway company including… well I won’t say who… [all laugh] .

Hanna: I was gonna say! Who is this, please?

Hanna: Yeah, so my next question was, of course, going to be… no spoilers, but like the setup of this show… I was going to ask everything basically everything you just went over! Haha!

Justin: I know, I steal lots of things because, you know, I think it’s so important because this show is very different. It’s not going to be like a lot of other shows you’ve seen at the State Theatre because it is using so many different textures to what we’re used to seeing on stage. There’s a lot of color. They cook food in the theatre so you smell… all of your senses will be heightened in the show. And the original production this was done on Broadway in 1990. The original production was done for a smaller group of people and it was more traditional vocal orchestrations and arrangements. And it has been redone by an incredible vocal arranger named AnnMarie Milazzo, and it’s 16 part harmony. Its gorgeous. And if you’d like to, you can listen to the recording that’s out on iTunes and Spotify. It’s extremely powerful music.

Hanna: Yeah, I was also going to ask what it was like, just because, it has been, you know, two decades since it was on Broadway, but this is still a show that people are, kind of, familiar with. They may have seen the original production and now they’re seeing the revival. So I was curious what it was like working with Lynn Ahrens and Stephen Flaherty who are still very much engaged and involved on this music that is still performed all the time.

Justin: Yeah… the show is produced often in schools actually around the country. There’s a lot of high schools that perform the show, when we were on Broadway, lots of young people came to see the show and would stay after and say “I was Timune” or “I was Papa Ge in my school production” so, it’s funny that, over the past really almost 30 years, the show has garnered kind of a cult following and people are familiar enough with the show, but I’m so glad the show’s going to be on tour to introduce it to the next generation of people. And the reason that Lynn and Stephen were interested in this new revival was because Michael Arden’s vision for it was so unique. They’ve seen this show now for the past 30 years done so many different ways in so many different communities with people of different colors and ages and this was very exciting to them to see a production that was done with a very realistic set, taking place in a very real place in Haiti, and just after a storm had hit the island. And telling this story with the framework of “what do people do when they have experienced natural disaster and how do you rebuild community”, and part of that, at least in Michael Arden’s vision of this, is through storytelling and through stories that we share in our communities. That’s part of how we rebuild.

Kelly: Yeah, it’s beautiful. And, you know, you were mentioning that this had been performed through schools throughout… a couple of our interns had mentioned that they were in some productions!

Kelly: Yes! This is actually very fitting that you said that! And so of course, they’re excited and I can tell you when you’re mentioning sand, and rain, and barefoot actors, the crew is probably scared! Haha!

Justin: Oh yeah… it’s a lot of work for the crew, but it’s really fulfilling because there’s never going be another show like it and it’s really special to be a part of. And I speak from firsthand experience working on Broadway. It’s unlike anything I’ve ever done.

Kelly: And tell us about… this has so many moving parts, of course, like any Broadway production, but this one definitely has a lot going on. Tell us about your role as associate director and what you do.

Justin: So, because I was a part of the production on Broadway as a production stage manager, I intimately know all of those, kind of, moving parts and gears in the wheels and ball bearings that make a show run smoothly. So for this production, the national tour, I’m Michael’s right-hand man in helping him coordinate all of the elements and also help him restage the show so that it makes sense for a proscenium , it’s actually kind of a total rethinking of how you tell some of these moments. You saw this production on Broadway. You know there were some times where we had the whole cast facing the audience all around and you couldn’t see everything happening simultaneously because so much was going on. Actors were in theater seats all around the audience, so we can’t do that in theaters like the State Theatre around the country. So we’re finding other really inventive ways, and Michael is a genius when it comes to this sort of thing, finding ways to affect the audience and have an immersive experience like we had on Broadway. So I’m helping Michael, now, before we’ve even gone into our full rehearsal process and technical rehearsals and to plan ahead and figure out how we’re going to make this translate and really have a powerful effect on people.

Hanna: Yeah. I was going to ask, I know you brought up earlier, the idea of instruments that were created out of garbage and I was hoping you could go into a little bit more detail just, you know I know you mentioned sand and everything, but how the entire aspect of this storm having just happened plays into more of the technical aspects such as the costumes and how everybody, sort of just moves around, and everything like that.

Justin: Absolutely! So, the designers who all worked together to create a world that was hyper realistic, but also goes to a place that is mythological, like where some of these villagers take on the characters and the roles of playing Gods. And they use items that they find in the detritus around them that would actually be found on Haiti after a hurricane. Mother of the Earth, Asaka, takes a tablecloth, a brightly colored plastic tablecloth off of a table and makes it into a skirt. And throughout the show that skirt kind of evolves. The costume designer, Clint Ramos, who was Tony®-nominated for the show, he found ways for all of those God characters, their costumes to, kind of, look like trash at the beginning and become something other worldly as the show goes on. It happens with makeup, it happens with wigs, and by the time we get to the other side of the island and Timoon is looking for her Daniel at a ball, everyone is in beautiful ball clothing, and the choreography that the incredible Camilla Brown did for the company, is showcased in ball gowns and it’s all seemingly made out of trash. The trash instruments, which we refer to lovingly as “trashtruments” are designed by an incredible guy named John Burtle and he has a company called Bash the Trash which tours around the country going to schools teaching students about music through recycled instruments. Instruments made out of recycled materials. So, we have all sorts of pieces of trash, and recycled bottles, glass, pipes, rain sticks made out of PVC pipe, and everyone in the cast has some sort of instrument they play, even if it’s just spoons. They’re playing instruments at some point. It also speaks to us turning trash into art. Us turning what people might throw away… trash into treasure.

Kelly: Well, I’m excited! We are excited about this show, Once on This Island, the national tour. We are with associate director Justin Scribner, thank you Justin! This just sounds so amazing so excited to get the tour at the State Theatre in June.

Justin: Thank you so much for having me.