The Quartet that’s been Playing Eclectic Music for Decades 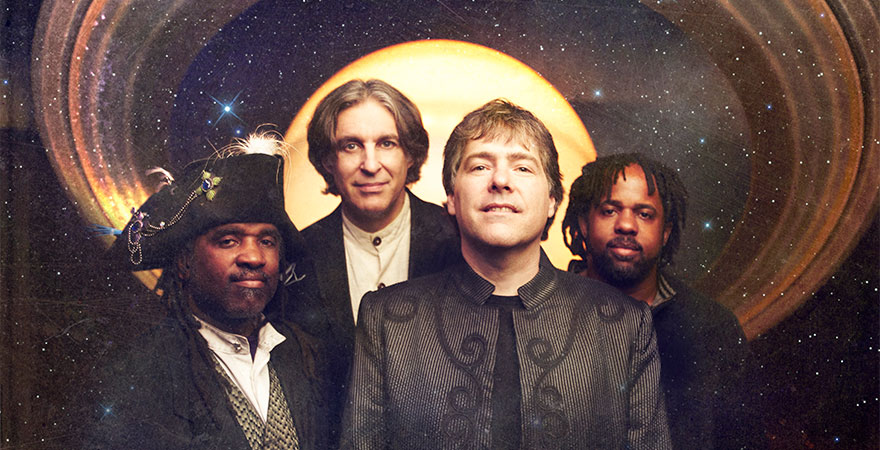 Bela Fleck and the Flecktones will be at State Theatre New Jersey December 6 for a one night show. Classical, jazz, bluegrass, African, electric blues, and Eastern European folk dance make up their music—a unique style and rhythm that only the Flecktones can pull off successfully. If you haven’t seen them live, brace yourself because you are in for a journey.

The band formed in 1988 as a quartet: Howard Levy (harmonica and piano); Bela Fleck (banjo); Victor Wooton (Bass); and Roy Wooten (Drumitar). In 1992, Howard left to pursue other opportunities. The trio lasted for a few years and then Jeff Coffin joined them in 1997 and then later departed to join the Dave Matthews Band.

In 2011, the original quartet reunited and released the album Rocket Science. Victor reminisced during their rebirth in 2011, “We did the TV show Lonesome Pine Special (and) BOOM so many years later here we are back to the original scene of the crime.” While Howard said at the time “It makes it really nice to come back together and to still have that feeling that it is special and that no one else could make these sounds.”

Their reunion was successful as each brought their individual experiences to the revived quartet. “I didn’t want to just get together to play the old music,” Fleck says. “That’s not what the Flecktones are about. Everybody’s full of life and ideas and creativity. I was intrigued by what we could do that we had never done before.” “Everybody’s still advancing on their instruments,” adds percussionist/Drumitarist Roy “Futureman” Wooten. “Everyone has grown over these 18 years, so it was an opportunity to realize some of what we were to do in the beginning.”

They have an impressive catalog of albums and Grammy® wins over the years. Their more recent Rocket Science album includes Life in Eleven which won Best Instrumental Composition at the 54th Annual Grammy® Awards. Other hits on the album include Sweet Pomegranates, Prickly Pear, and Joyful Spring. It’s a mystery what they’ll play at the State Theatre but it’s sure to be an inspiring show given their individual and collective evolutions and as Fleck remarked at the time of their reunion—“I don’t want to celebrate the old days we’re here now let’s go do something we’ve never done before let’s do what the band was always supposed to be, which is pushing all four of us into new ground.” While Roy (Futureman) said at the time “There are people who don’t remember the very beginning of the Flecktones. It’s like people that started watching Star Trek: The Next Generation and never got to meet Captain Kirk. So here we go, the original crew of the Enterprise coming together on a new mission.”

In 2018 they were awarded the Miles Davis Award from the Montreal International Jazz Festival for their entire body of work. On December 6th these four musicians will bring the embodiment of their work to State Theatre in a live performance, and whether you’ve listened to them since 1988 or are new to them, Bela Fleck and the Flecktones will take you on a fantastical musical journey.