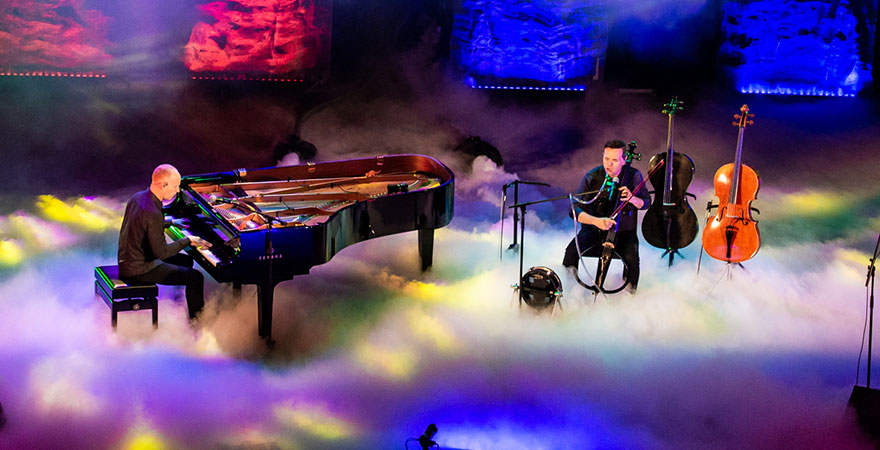 The State Theatre was packed on September 10th as The Piano Guys took the stage. As the curtains rose the stage was over flowing with smoke as Steven Sharp Nelson and Jon Schmidt took the stage. Playing crowd favorites such as “Let It Go” and “All of Me” they had the crowd enthralled in no time. While playing “All of Me” Steven amazed the crowd as he used his French cello more as a drum then as a string instrument. Soon after that Jon felt the need to show off what he can do and laid on his back and played the piano upside down, much to the delight of everyone in the hall.

The Piano Guys continued to amaze the crowd as they performed an improv of “With or Without You” while Steven used his Loop Pedal. The guys then took some time to tell the story of how The Piano Guys got started with a store owner’s dream of using social media to sell pianos. One of the store owner’s idea was for them to play at the Seven Wonders of the World. At the time they had told him to be reasonable, but Tuesday night they played “Kung Fu Piano: Cello Ascends,” a song they wrote to play on The Great Wall of China. They then went into an original piece from their newest album called “North Cape."

As the second half began, the duo continued to have the audience rolling with laughter. Their crew helped out as they pulled pranks on both Steven and Jon. And early in the second half, they were joined by eight violinists from the Central Jersey Youth Orchestra to perform “Beethoven’s 5 Secrets.” They also played their newly released song “Someone You Loved” with the music video playing in the background. Steven’s antics while playing Pachelbel Canon had the audience doubled over in laughter as they transitioned into “Rockelbel’s Canon,” during which Jon showed off his dance moves.

Overall it was an amazing show and I have never seen two musicians have as much fun performing as The Piano Guys did Tuesday night and it you have not had the opportunity to see them you definitely should. It is a perfect show for all ages.