The Stories Behind the Music: Tony Bennett’s Greatest Hits 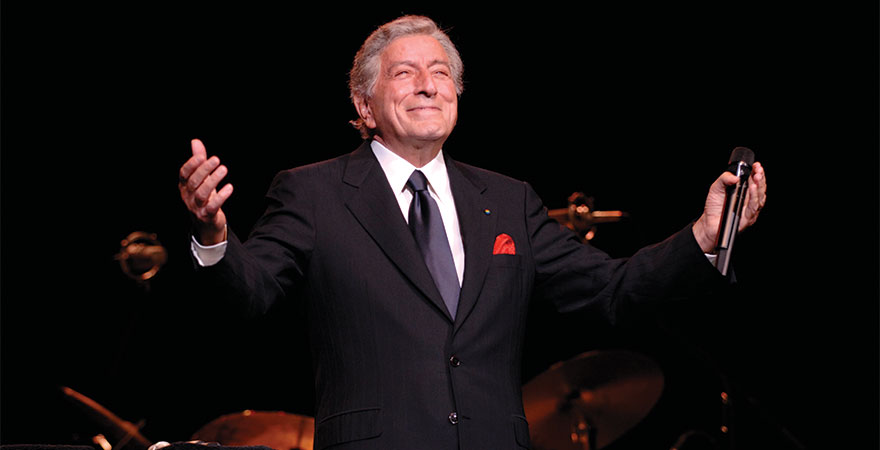 Music legend Tony Bennett will be at State Theatre New Jersey October 20 as part of his I “Left my Heart” Tour. In a remarkable career spanning over five decades, 70 albums, and 19 Grammys®, Bennett is still pursuing his life's passion of performing. Over his career the beloved 93 year old has had dozens of songs top the charts including classics like “I Left My Heart in San Francisco,” “I Wanna Be Around,” and “Smile.” The melodies and lyrics of these songs have captivated us for years, but few know the story of how they fell into Bennett’s hands.

“I Wanna Be Around” (1951)
A cosmetician in Ohio is responsible for Bennett’s first hit. In 1957, Sadie Vimmerstedt was frustrated with the lack of quality music on the radio. Inspired by Frank Sinatra’s divorce and secret love affair, she sent songwriter Johnny Mercer the lyric “I want to be around to pick up the pieces when somebody’s breaking your heart.” For two years the letter sat on Mercer’s desk while he lined up the best singer of the times to sing it, Tony Bennett.

From Ohio to Brooklyn, the stories of how Bennett’s songs became hits become even more fascinating.

“I Left My Heart in San Francisco” (1962)
The ode to the ‘Golden City’ wasn’t actually written anywhere near it. Songwriters George Cory and Douglass Cross moved to Brooklyn in the 1950’s following their military service only to spend their days missing the sunny West Coast. The song wasn’t pitched to Bennett until 10 years later when his accompanist Ralph Sharon stumbled across the sheet music in his hotel room in Hot Springs, Arkansas. Later that night Bennett sang the lyrics of the song that would become his greatest hit. In a JazzTimes Interview Bennett stated, “It’s such a great city and I love to be able to promote that great city. People from all over the world actually take vacations to San Francisco after they hear that song. And it’s a magnificent city.”

Moving on to an even older Bennett favorite, this next song was written years before his time and even before movies had sound!

­­­“Smile”
Nearly two decades before Bennett made it famous, “Smile” was written by entertainer Charlie Chaplin as an instrumental for the silent film Modern Times. Chaplin used inspiration for the tune from the Puccini opera Tosca with the lyrics added later by John Turner and Geoffrey Parsons. Nat King Cole recorded the first version of the hauntingly beautiful melody in 1954 with Bennett bringing it to new heights in 1959. The song has been covered by numerous artists over the years including Lita Roza, Barbara Streisand, and Diana Ross.

Now that you know the stories behind the music, don't miss out of the legend Tony Bennett at the State Theatre New Jersey on Sunday, October 20!