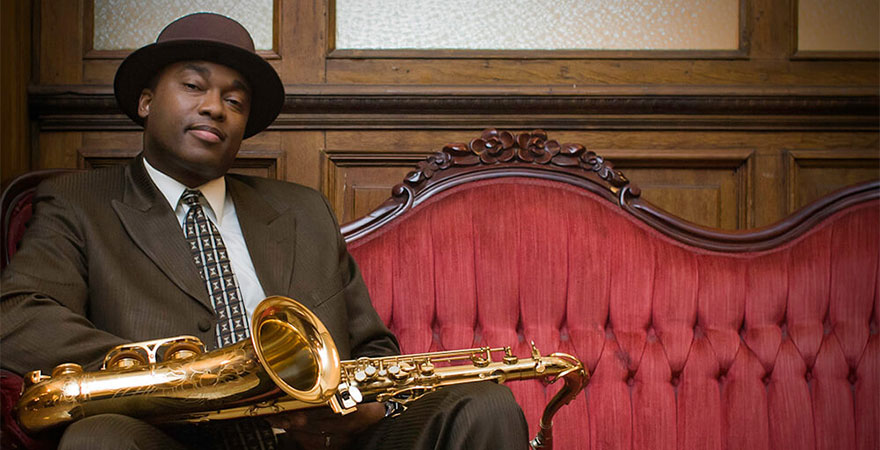 At the age of 23 his work JC on the Set was universally acclaimed as the finest debut by a saxophonist in decades and that was the beginning of his career. Today he’s recorded 18 albums under his own name and has appeared on more with artists including The Art Ensemble of Chicago, Ginger Baker (Cream), Kathleen Battle, Herbie Hancock, Wynton Marsalis, Madeleine Peyroux, and Marcus Miller.

Hailing from Michigan, he was 11 when he acquired his first horn, a King alto. As the youngest of five, his siblings were all musically inclined. He recalled his childhood during a Moscow, Russia interview back in 2009 and how he didn’t want to play the same instrument as any of his family members, so he chose the saxophone. He remembered his mother listening to jazz radio stations as she did her chores and through the vocals he would “hear a sound that was very complementary to whatever the vocalist just did, or during the time the vocalist was singing the verse and whatnot, and I dug it.” The sound was the saxophone.

His philosophy on life and music is inspirational as he seems to constantly challenge himself.  “You have to be totally comfortable wherever,” Carter says. “I feel that music equals life, that’s the way my teacher always taught me. You just can’t go through life and experience it fully with a set of blinders on. I think there’s tremendous beauty in cross-pollinations of music and influences.”

Contemporary classical music composer Roberto Sierra well aware of his talent, describes him as someone who can read the notes and also improvise. “It is very much alive in jazz but is not alive any more in classical music as much. The instinct that James has is unique. I was amazed by his virtuosity.” He was so impressed by his abilities that he wrote the Concerto for Saxophones specifically for him.

His most recent work is James Carter’s Elektrik Outlet, is a new configuration which has given him a new groove to explore.