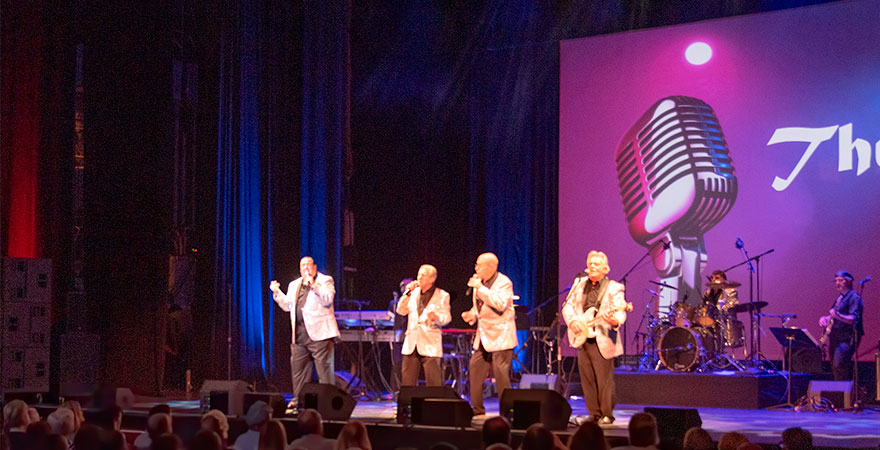 Chubby Checker & The Wildcats headlined the Rock and Roll Spectacular at State Theatre New Jersey. Prior to his act, The Capris, The Duprees and Jay Siegel’s Tokens entertained the audience. The theater was packed, and everyone was ready to be wooed by these 1960s musicians. We were transported back to that magical time.

Some of the bands had original members and their moves were impressive. Siegel recently celebrated his birthday and a cake came rolling out on wheels to mark his 80th. Regaled in sleek suits and shiny glitter, The Capris and The Duprees belted out some wonderful songs of their own and covers from that rich time in music history. Hits included “Go Johnny Go,"  “Gone with the Wind” (Duprees), “Hey There Lonely Girl,"  “Jack the Knife," “Morse Code of Love” (Capris), “There’s a Moon Out Tonight” (Capris), and “You Belong to Me” (Duprees). The energetic romantic harmony of these singers is second to none and impeccable after all these years. They acknowledged our great country and the men and women of the Armed Forces, giving them the limelight as they were asked to stand as we clapped our appreciation.

I always heard of the British Invasion, but never knew the impact it had on American bands. Siegel acknowledged that point in history as being an impossible time for American bands to be played over the airwaves. Thanks to the East Coast Music Hall of Fame, these bands have the opportunity to be recognized. Their website lists Checker and Siegel as inductees. While these singers were from the east coast, they were even closer to home hailing from Brooklyn, Jersey City, Philadelphia, Queens, and the ‘exotic’ Staten Island, a reminder of the talented region we live in.

The highlight of the night for me was “The Lion Sleeps Tonight.” In 1961 it was #1 for the band and it has since reincarnated via the movie The Lion King, hitting #1 again. With barely any words, the melody is transfixing and timeless. Siegel told of going to his 5-year-old granddaughter’s kindergarten class to talk about the hit still popular after all this time.

Spry Checker came out on stage to a cheering crowd. In 1960 “The Twist” hit #1 and went on to be the inspiration for his other songs which all contributed to a revolution in dancing. “The Jerk,”  “The Hully Gully,” and “The Boogaloo” were all part of that history. His voice is spry too, without a hint of fading any time soon. At the end of his set, he invited the crowd to come on stage for the twist and many took him up on the offer.

These singers are committed to keeping the 60s music alive and they are doing a great job. Taking a stroll back to days gone by when the world seemed less crazy is a good thing. I am glad I got to experience it.