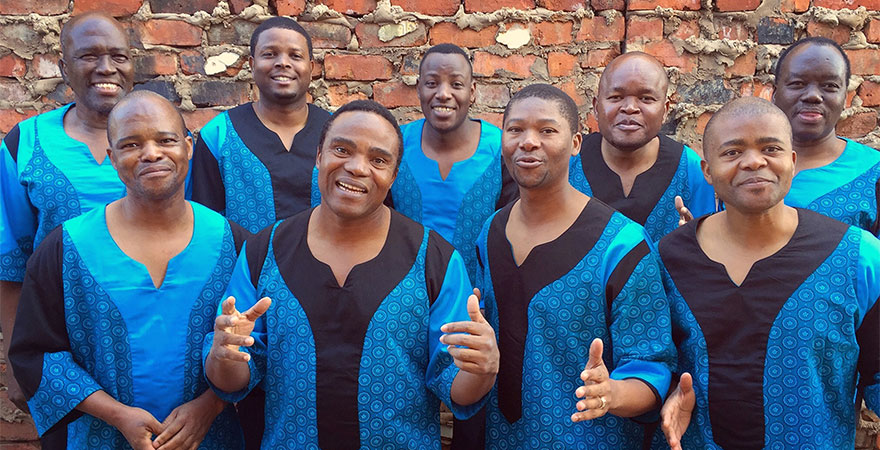 Internationally-acclaimed and five-time Grammy® Award-winning group Ladysmith Black Mambazo returns to The State this coming February! These vocalists not only spread their mission statement of peace, love, and harmony to every venue they grace, but they also share personal, indigenous stories about their beliefs and culture. Founded by Joseph Shabalala in the 1960s, this South African group has repeatedly opened up about their lives in Ladysmith—a small village just outside of Kwa-Zulu Natal—part of Northern Africa.

As part of their tradition, the Zulu people who inhabit Northern Africa, use oracle stories to spread news about the day, warnings, life lessons, and all sorts of information to one another. These became tales that are passed down from generation to generation for all to know and cherish. It is this connection formed through family conversations that fuels a majority of the inspiration for the songs produced by Ladysmith Black Mambazo.

This storytelling became a prominent activity for the Zulu people when they were forced to work in the South African mines  six days a week. A traditional music known as isicathamiya (is-cot-a-ME-Ya) was sung on Sundays to boost morale and to provide a source of entertainment. When the work in the mines was done, the workers took the songs home with them, spreading the type of music Ladysmith Black Mambazo models their work after to their villages.

In an interview with NPR, Ladysmith’s manager, Mitch Goldstein, tells how a particular album—Songs From A Zulu Farm—is inspired by the parents from the Zulu village. The indigenous parents would sing traditional songs in Isizulu, the most popular language in South Africa, to their children. This culture norm inspired two of the songs off of the album. First, "Imithi Gobakahle (Children Come Home), "a song warning children about the dangers of the weather, and second, "Ntulube (Away, You River Snakes)," teaching kids about the creatures that live in the river and which ones they should stay away from.

Not only does this allow stories to be told through multiple generations, but it allows the Zulu people, and fellow members of Ladysmith Black Mambazo, to be true to their culture and to themselves. Their indigenous and raw music allow for personal acceptance instead of a forced change brought on from outsiders. It leads for room to discuss cultural life lessons, bring awareness to various political  views, and even to spread messages offering peace and kindness.

In another NPR interview with Albert Mazibuko—the oldest original member of Ladysmith Black Mambazo—and Babuyile Shabalala, son of founder Joseph Shabalaba—Shabalala stated, “I'd like them [my friends] to take—what my grandfather said is that he wanted to plant seeds deep down into the earth that will grow into and become strong trees and that the strong winds of change will not make them fall. And I like to believe that I'm one of those seeds, and I want everyone else to be one of those seeds.” In this, Shabalala expressed his mission to spread songs and messages that are meaningful and inspirational to others that will help them grow into better, stronger people.

For over 50 years, Ladysmith Black Mambazo has been sharing their songs with the world. Their truthful and original lyrics, along with their indigenous song style, create beautiful songs that carry their peaceful messages far and wide. To hear Ladysmith Black Mambazo  and their uplifting vocal harmonies, come to State Theatre New Jersey on Tuesday, February 4 at 8pm.

Sponsored by Bank of America