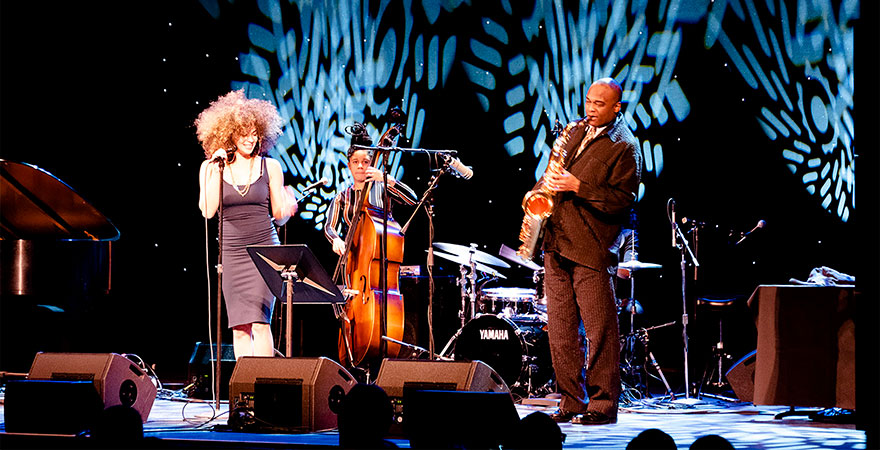 James Carter, James Francies, and Kandace Springs were in the house to celebrate the 80th anniversary of Blue Note Records. The three talented artists and their bandmates gave homage to the record powerhouse.

Jazz pianist James Francies and his band opened the night. The 24-year old characterizes the music of the Blue Note and has recorded and/or performed with many artists including Christian McBride, Pat Metheny, and Lauryn Hill. He frequently fills in with the Roots on the Tonight Show Starring Jimmy Fallon. The New York Times said he’s “a pianist with liquid dynamism in his touch.” The trio played in unison and their music felt timeless and peaceful. I felt like I was lifted out of the room on their wings. Francies’s debut album Flight is on the Blue Note record label. He’s also a keyboardist and composer; his meteoric rise and youth promises a long career.

James Carter and his organ trio were up next. This maestro has recorded 18 albums under his own name and appeared on more with artists including The Art Ensemble of Chicago, Ginger Baker (Cream), Kathleen Battle, Herbie Hancock, Wynton Marsalis, Madeleine Peyroux, and Marcus Miller. Calling their presence for the big party a “blessing and privilege,” he started with "Going Home" calling out the singer Spanky Wilson. He is feisty and passionate about his sax, swaying like he is having his way with it. Uber cool, he gives the instrument a voice filled with emotion while he bops and squeaks.

He played Gypsy legend Django Reinhardt’s "Nuages." Referencing the bands album Live From Newport Jazz, they played some pieces from it. He’s modest and gave the stage to drummer Alex White and keyboardist Gerard Gibbs as he stepped out of view a few times. He wished us peace and blessings saying they would catch us on the flip side.

Rounding out the night, pianist and singer Kandace Springs sang “Angel Eyes,”  “Devil May Care," and “The First time I Saw Your Face," among others. Prince found her on YouTube singing Sam Smith’s “Stay With Me,” and is quoted as saying, “she has a voice that could melt snow.” Mentoring her, he brought her talent to the spotlight before his unfortunate death. But her musical genes hail back to her father Scat Springs, a respected Nashville session singer. Her voice is soulful and jazzy carrying the audience off to the heavens. I heard chords of Beethoven’s “Moonlight Sonata” and she did learn classical at a young age. Her upcoming Sanborn Sessions has a song dedicated to Nina Simone, one of her influencers.

For the finale, these luminaries shared the stage and I’m sure the Blue Note musicians of the past were smiling down on them. It was a joy to attend this birthday bash and I didn’t want the night to end. I look forward to seeing these musicians again, but until then, I’ll catch them on the flip side.