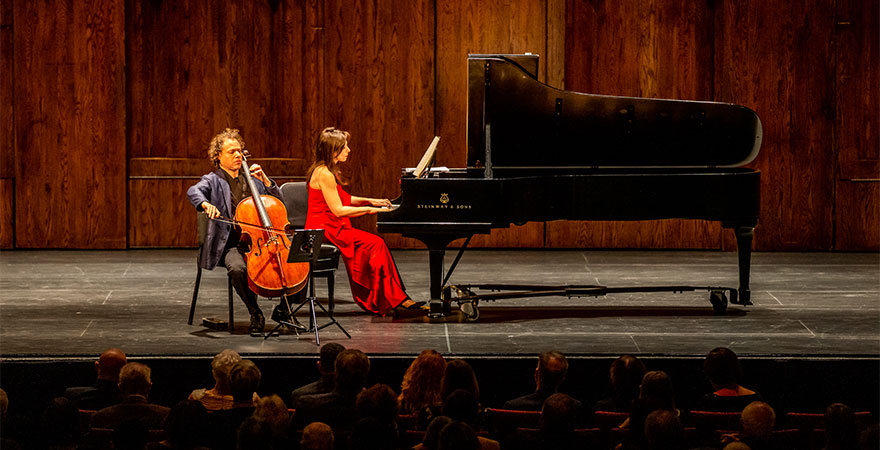 On November 17, the recent classical concert at the State Theatre showcased the talents of cellist Matt Haimovitz and pianist Navah Perlman. They have been playing music together for four decades, beginning in elementary school. The program included Beethoven and American composers John Corigliano and Philip Glass. For a cloudy cold November day, the music was soothing and the dialogue interesting as they informed us about the composers and the music.

Haimovitz remarked that the combination of cello and piano is incongruent—the instruments don’t belong together. The cello is happy with string instruments, and the piano is a member of the percussion family. But Beethoven brought them together and the blend is magical. They juxtaposed the music of ‘contemporary music giants’ with Beethoven and for classical music aficionados it was a feast.

They opened with the maestro’s 12 Variations in G Major on a Handel Theme, “Judas Maccabaues” which was light. The second piece was Philip Glass’s The Orchard, which was drenched in foreboding and piercing cello sounds and then light piano, rife with tension and emotion. His Partita No. 2 for Solo Cello sat in his filing cabinet for seven years until he unearthed it and asked Haimovitz to review it a few years later. Haimovitz said it was like a Bach Cello Suite and he played four movements from it. From one movement to the next, it was expansive and then choppy seas and a back and forth until the end of part three where silence ensues and then off to the fourth movement which has an atmosphere of seeking and longing.

The piano solo for Corigliano’s Fantasia on an Ostinato was beautifully played by Perlman. She approaches the piano with hesitation and is careful as she presses its keys, treating it delicately. She explained an ostinato is a beat which runs throughout the whole piece of work creating an atmosphere which can sometimes be hypnotic. The ostinato for this work is from Beethoven’s 2nd movement of his 7th symphony. Themes, tunes, melodies can be heard in ostinatos and a fantasy is free in form and inspiration. This one started out deliberate, ebbed and flowed, and at times had a fury until it started winding down. For the finale they played a Brahms sonata, the first piece they played together so long ago.

In 2020, Beethoven will turn 250 years old. Haimovitz said classical concerts during the year will have a Beethoven focus. I wondered if Beethoven at 12 years old had any inkling that the world would be celebrating him so many years after his debut of 9 variations in C Minor for piano on a march by Ernst Christoph Dressler. Haimovitz and Perlman’s outstanding performance was a lovely tribute to the maestro and two modern day musicians.