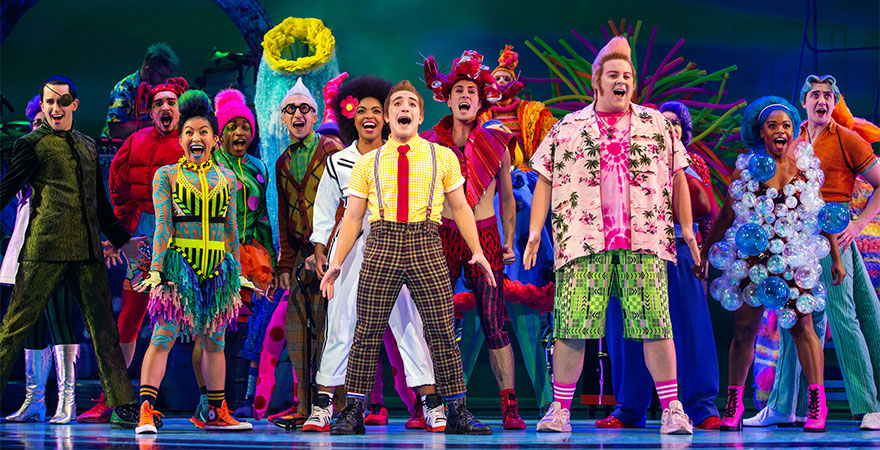 Are ya ready, kids?! The SpongeBob Musical is transforming State Theatre New Jersey into Bikini Bottom as the national tour makes a stop in New Brunswick the weekend of November 29-December 1. Come see SpongeBob try to save the world in the epic Nickelodeon™ musical sensation. But SpongeBob can’t do it on his own. He turns to his best friend, our favorite starfish, Patrick Star, for help to defeat Mount Humongous, a volcano that is threatening the sea lives of Bikini Bottom.

First up, we have Lilo and Stitch. Not only are they BFFs, but they are also family. They share a pet vs. owner relationship, so there are some more boundaries in this duo than others. Stitch certainly knows how to stress Lilo out, especially when he misbehaves. It also takes a while for the two to be able to communicate with each other because Stitch is an experimental creature who only has a few words in his vocabulary. But nonetheless, it is rewarding for viewers to see how Lilo and Stitch’s bond grows throughout all four films and in the television series.

Although they are not family, Bert and Ernie share a very similar bond to Lilo and Stitch as they spend every day together living together as roommates. The duo from Sesame Street have been best friends since day one of the preschool classic, which began 50 years ago in 1969. Bert and Ernie are the definition of the phrase “opposites attract.” You have prim and proper Bert, who leads a very boring lifestyle. But then there is his roommate and best bud, Ernie, who adds color to each day, even if Bert isn't in the mood. Sesame Place employee and Sesame Street fanatic, Brigid Comyn, says “They’re the epitome of best friendship, because no matter how different they are, they embrace each other’s differences and that makes them better people [muppets] all around.”

Some may say that Tom and Jerry aren’t friends at all, but that cannot be farther from the truth. Tom and Jerry have a very distinct friendship in comparison to other cartoon duos. Tom and Jerry literally play cat and mouse, as feline Tom tries to capture the squeaky Jerry in every episode of their self-titled show cartoon series, appreciating each other at the end of the day. Their antics keep their friendship lively and fresh, with neither character getting bored of each other’s company.

All these television BFFs have special characteristics within their friendships, but SpongeBob and Patrick really know how to stand out. Viewers hardly see the two argue or disagree with each other. Even when they are in a pickle, SpongeBob and Patrick still know how to remain positive and never have a dull moment. The sponge and star duo constantly give off a vibrant energy, and they exemplify a friendship that shows absolutely no judgement or criticism.