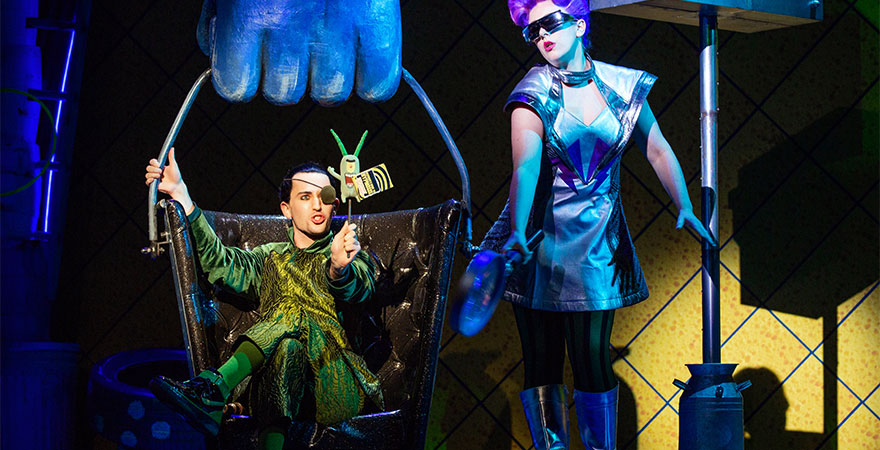 The SpongeBob Musical is making its way to the State Theatre with four fabulous performances on November 29 through December 1.

How do you make a magical underwater cartoon world come to life on a live stage? This was the task that David  Zinn, the musical’s set designer, was faced with. All the critics agree he succeed with flying colors and shocked them by creating a set made almost entirely of recycled materials. The New York Times said “recreating the series’ submarine town of Bikini Bottom, Mr. Zinn shows the wonders that can be worked on everyday rec-room items by hyper-magnification and coats of psychedelic color."

In an interview with Backstage, designers from the show remember discovering that much of what makes up the town of Bikini Bottom is discarded materials thrown into the ocean from land. “Plankton’s restaurant, The Chum Bucket, is a bucket that still has someone’s glove attached to it that fell. SpongeBob’s house is a pineapple.” With this inspiration, set designers took recycling to the next level. Mike Dobson, sound designer on the show, recalled the way in which designers incorporated recycled materials into not only the sets themselves, but almost everything on stage including percussion. “They did all these amazing things with pool noodles and literal garbage and little pieces of plastic that are sewn into the details of the costumes.”

In addition to recycled sets and costumes, sound directors also used non-traditional materials to recreate the sounds audiences know well, such as the sound of SpongeBob’s footsteps. Mike Dobson with Backstage said “[we were going] for making [the] sound as real and natural as possible… adding things like old trash cans and frying pans into the sound palette seemed like a very natural way to go.”

Through many versions of sets made from recycled goods and trips to recycling plants, artists managed to recreate the amazing ocean world of Bikini Bottom. From SpongeBob’s living room all the way down to the squeak of his shoes, The SpongeBob Musical is sure to continue to amaze audiences by bringing the favorite cartoon to life at the State Theatre on November 29 through December 1.